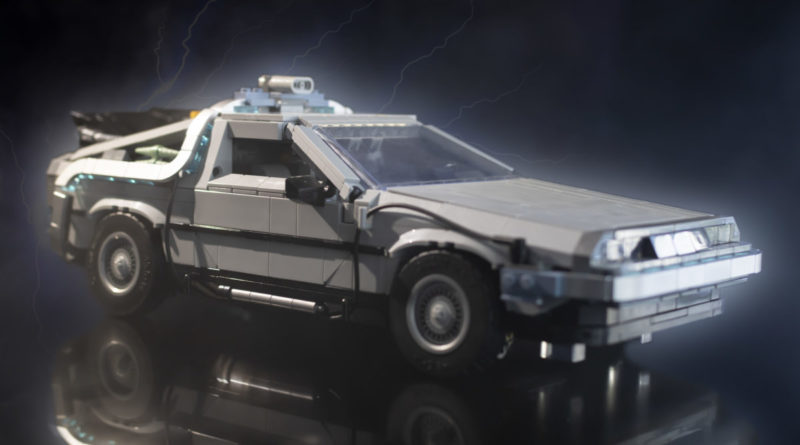 You’ve got to come back with us, Marty – back to find 10 brilliantly nerdy references in LEGO Creator Expert 10300 Back to the Future Time Machine.

10300 Back to the Future Time Machine is far and away the most accurate and authentic DeLorean that the LEGO Group has ever produced. Granted there’s only been two, but that doesn’t take anything away from just how much love and attention to detail has gone into this updated model.

The latest Creator Expert set allows fans to create not one, not two, but three different DeLoreans from across the Back to the Future trilogy – each one faithful to the source material. The original 1985 DeLorean features the lightning rod attachment used to help power the flux capacitor and send Marty back to 1985.

Back to the Future Part II’s futuristic model features hovering wheels and a Mr. Fusion upgrade, and the DeLorean from the final instalment includes modified wheels (sadly, the metal rims used when the DeLorean rides on the train tracks aren’t included) and the cobbled-together time circuit unit attached to the front.

However, digging deeper under those obvious features reveals even more attention to detail has been lavished on this set. You’ll no doubt love spotting all the references spread throughout the model as you put it together from April 1, but in case you miss anything we’ve assembled this list of our favourites.

Let’s start with the most iconic part of any Back to the Future set: the flux capacitor, the thing that makes time travel possible in the first place. While 2013’s 21103 The DeLorean Time Machine relied on a single printed part to recreate the famous device, 10330’s Flux Capacitor is entirely brick-built. The glowing orange light that emits from the Capacitor once it’s powered on has also been faithfully recreated using a hidden light brick built into the DeLorean’s framework.

The Flux Capacitor requires a staggering 1.21 gigawatts to operate (all together now, “1.21 gigawatts!”) and so Doc Brown needed to find a source that could generate that kind of power. The obvious solution – well, obvious if you are an eccentric scientist – was plutonium, the only problem being it’s not that easy to come by.

Unable to obtain it on his own, Doc Brown made a deal with a gang of Libyan terrorists who agreed to give him the plutonium he needed, as long as he promised to build them a bomb. Of course, he instead used it for his time-travelling experiments. Doc Brown’s case of plutonium is included in 10300 Back to the Future Time Machine, and can be found by popping open the bonnet.

Now, if you’ve managed to acquire some plutonium, you are of course going to need somewhere to put it – step forward the plutonium chamber. It’s into this chamber, located at the rear of the DeLorean, where Doc Brown places his ill-gotten plutonium in order to power the time machine. This component is represented on the LEGO model using a 2×2 and 3×3 dish attached to a six-stud shooter that sits at the back of the model.

Travelling back in time is dangerous enough – we all know what can happen if you mess with the space-time continuum – and if you were to just randomly travel through time without any kind of destination in mind the consequences of your actions could be utterly catastrophic. Thankfully, Doc Brown fitted the DeLorean with the time circuits, allowing the user to input precisely the time, date and year that they want to travel to.

Three stickers are used for the time circuits in 10300 Back to the Future Time Machine. Each one features accurate detailing and colours, and underneath those is a single printed 1×1 tile representing the input device.

Time circuits don’t just operate themselves: to boost them into action, a lever located just by the gear stick needs to be pulled. Marty accidentally pulls the time circuit lever when he’s trying to outrun the Libyan terrorists (the same ones that Doc Brown stole the plutonium from), which sends him hurtling through time to 1955. If you look closely inside the LEGO DeLorean you’ll see the time circuit lever has been included, and rather accurately is right next to the gear stick.

Among the most iconic and prominent features of Doc Brown’s DeLorean are the large vents that protrude from the rear. These serve an incredibly important purpose, helping to cool the nuclear reaction that the flux capacitor creates when it travels through time. They also double up as propulsion devices once the DeLorean is in hover mode. Larger vents were used on the time-travelling train that the Doc builds back in the Old West – but we haven’t been treated to a LEGO version of that particular machine… yet.

The Californian plate OUTATIME found on the back of the DeLorean is probably the single most famous licence plate in all of cinema, so there’s absolutely no way the designers could have left it out of 10300 Back to the Future Time Machine. It’s a sticker rather than a printed piece, but looks fantastic regardless.

Of course, licence plates are so 1985, and when travelling to the oh-so-futuristic time period of 2015 they have been completely done away with, in favour of a barcode instead. Similar to the OUTATIME plate, this is also a sticker and can be swapped out depending on which particular model DeLorean you are building.

2015 is also the year that Marty first rides the hoverboard. It’s one of the coolest things ever committed to the silver screen, and something that kids and adults alike have wanted in real life ever since. Of course, we have ‘hoverboards’ today, but we all know they’re not really hoverboards like the one in Back to the Future.

Thankfully this set does come with an actual hoverboard, or an actual LEGO one, anyway. A sticker is once again used for its design, which is very accurate – except for the curve at the top, which has strangely been left sticker-free, unlike its on-screen counterpart.

Something else that every single kid wanted after seeing Back to the Future 2 was self-tying laces. Unlike the hoverboard, the good news is they actually did become a reality, thanks to Nike. The bad news is, they were limited edition and will set you back around £30,000 if you want to buy a pair today (yes, you read that right: £30,000).

Minifigure Marty’s self-tying shoes cost considerably less, as they are simply represented by some exquisite printing on the side of his leg pieces.

As Marty and the Doc find out, 2015 can be a strange time period indeed. While some things have changed for the worse, one thing that’s definitely a huge positive (especially for the future environment) is the fact the DeLorean no longer needs radioactive plutonium to fire up the flux capacitor.

Thanks to the handy Mr. Fusion device, all that’s needed to generate the 1.21 gigawatts (1.21 gigawatts!) is a load of old rubbish. Empty beer cans, banana peels and whatever else you can chuck in will give you enough power to go speeding through time. This model doesn’t use actual rubbish, of course – LEGO elements are used instead.

And that’s our list. Did we miss anything out? Lets us know in the comments below and if we did, we’ll travel back in time, update the article and by doing so hope we don’t inadvertently cause a chain reaction that would unravel the very fabric of the space-time continuum, and subsequently destroy the entire universe.

So, no pressure then.

10300 Back to the Future Time Machine launches April 1 at LEGO.com and in LEGO Stores. Check out our detailed review of the set ahead of its release.