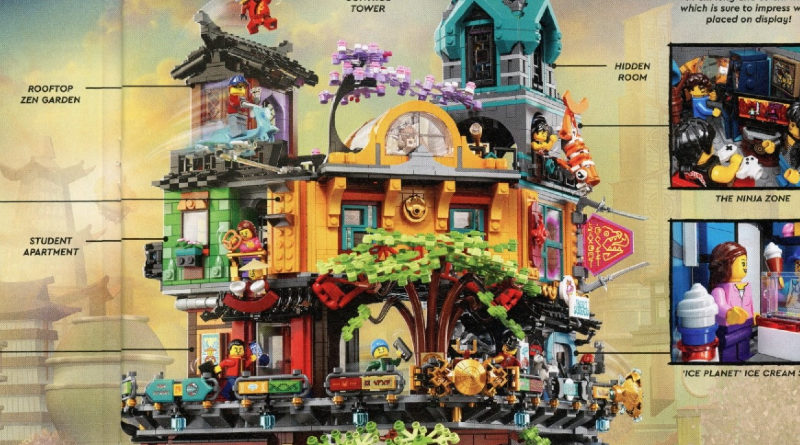 High-quality pictures of 71741 NINJAGO City Gardens, the second expansion to the fan-favourite 70620 NINJAGO City have been revealed, giving NINJAGO fans the first taste of what to expect in this anniversary set. With a release exactly 10 years after the first episode of the TV show aired, here are 10 references and secrets fans can find.

In the original 70620 NINJAGO City, the Jamanakai Villager brought a unique economy to The Old World. He chose to trade hand-raised frogs for any trinkets he could find. 70657 NINJAGO City docks continued this by including another frog of the same colour. The latest expansion chooses to mix things up with a pink frog, no doubt an expensive find for the villager.

Just like the original set, 71741 NINJAGO City Gardens makes many-a-reference to LEGO themes of the past. This latest expansion directly references the chilling Ice Planet theme with an ice cream shop lined with iconic transparent orange bricks. Hopefully, they have an orange transparent chainsaw flavour!

The ninja can take a break from the hustle and bustle of the city in the rooftop ‘Ninja Zone’. In this space the ninja are free to laugh and play, but what’s that on the TV? NINJAGO fans might notice the Prime Empire video game being played on the TV with a matching controller to boot. With a patch, this version probably won’t abduct its players.

For the best food in the city, there’s no better place than Chen’s Noodle House, the same Master Chen who stole the elemental powers and tried to bring about a second serpentine war. Thankfully, his daughter, Skylor now runs the shop, despite being absent from the set. One remaining feature is the winking Chen bust above the shop taken straight from the show.

Another tradition derived from the original NINJAGO City set is the presence of signs and displays themed to sea life. The original set featured a squid, pufferfish and crab restaurant. The newest expansion continues the tradition with a Koi fish statue hanging off the right side of the model.

Even fans of NINJAGO since the very first episode might be confused by this one. Those thinking Sensei wu never had a dog would be right, at least in the show. As part of the possession wave in 2015, 70734 Master Wu Dragon included a crossbow-wielding husky but never appeared in the TV series. Thankfully this pooch makes it’s grand return here.

As part of 71741 NINJAGO City Gardens, an apartment owned by a dedicated fan of NINJAGO is present, complete with ninja bedding. The bright blue bedding is printed on bricks and features the red and black ninjas among some shurikens. If only it was real.

The favourite food of the brown ninja Dareth is finally here, with 71741 seeing Puffy Potstickers added back to the Chen’s Noodle House menu. Dareth has been requesting this change to Skylor since Season 4 of the show, with a brief cameo in Season 5. The dish has been re-added to the menu in this set with a puffy potsticker being served with a rice dish.

A central piece of 71741 NINJAGO City Gardens is the NINJAGO history museum, featuring artifacts and plenty of references. Unfortunately, the current images aren’t good enough to spot the finer details. What can be seen is a Serpentine Staff, display case and paintings along the wall and a micro model of the ninja’s flying HQ, Destiny’s Bounty.

Sprouting through the centre of 71741 NINJAGO City Gardens is a three-storey tall tree. At its base, a nervous Jay hands Nya a flower but towards the top, a unique tile can be found, celebrating the 10-year history of this theme. The design on this piece is shared with round tiles adorning stands in the 2021 sets for Legacy NINJAGO minifigures, keeping the consistency.

71741 NINJAGO City Gardens releases January 14 for VIP members and February 1 for everyone else. The price will be $399.99 CAD but there is no word of other regional pricing yet, hopefully, this set and the rest of its details will be officially revealed soon.