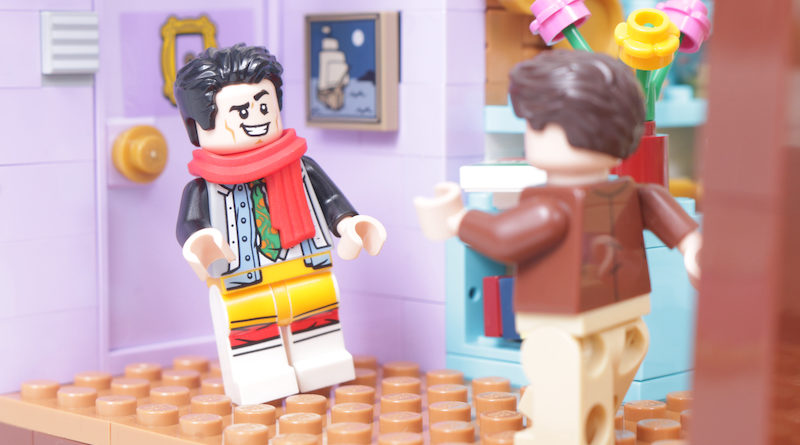 LEGO Creator Expert 10292 Friends Apartments is packed full of fun references to the TV show – here are some of our favourites.

Much like that set, 10292 Friends Apartments is packed full of the storylines and jokes that made Friends the iconic and long-lasting success that it remains today. Plus, being twice the size of 21319 Central Perk, displaying two large brick-based recreations of Chandler and Joey’s apartment and Monica and Rachel’s apartment, you can expect to see twice the number of references.

Whether big or small, obvious or subtle, here are some of our favourites that we spotted whilst building the LEGO Friends set.

“Oh, I see you moved the green ottoman.”

This goes back to the sixth episode of Season 1, when Rachel cleans the apartment and triggers Monica’s not-so-inner perfectionist after moving the green ottoman from its very specific location. There may not be much to the LEGO build, but its inclusion in 10292 Friends Apartments is one of the more subtle – and funnier – nods to the show. Too bad it’s still, as per the instructions at least, not where ‘just for fun’ Monica would want to pick it up, move it to and suggest ‘let’s just leave it there for a while’.

Unlike the girls’ apartment, the boys’ apartment undergoes several set changes throughout the show. The most memorable of them is undoubtedly the time where, in The One with the Cat, Joey inadvertently allows someone to steal all of their furniture by getting himself locked into the entertainment unit he was trying to sell.

When Chandler finally comes home and rescues Joey from the unit, it’s all that’s left in the apartment. Ultimately, Chandler organises a trade with another set of roommates who are looking to get rid of their canoe with the same fervour as Chandler wants to be free of the unit. At the end of the episode, Joey and Chandler are left sitting contemplatively in the canoe, one of the only pieces of furniture they have left.

“She sold it to me for a very reasonable price.”

Gladys is the terrifying three-dimensional artwork that Phoebe has to give up when her boyfriend Mike moves into her place. She gifts it to Monica, whom Rachel mocks for having to find somewhere in her ‘high maintenance’ apartment for, before Monica tries twice to offload it on to her friend, then living with Joey.

Monica eventually sells it to Joey ‘as an original Buffay’, with Joey happily telling Rachel he got it ‘for a very reasonable price’. Rachel convinces her housemate that it is haunted, but can’t return it to Monica as Phoebe reveals a second, equally scary artwork she has created so they can have one each. Yes, the LEGO version of Gladys is probably just as haunted. It looks it.

“I need to say goodbye to the table.”

So many conversations were had over the foosball table between virtually every member of the cast. It also serves as a symbolic representation of Joey and Chandler’s friendship. This comes to a climax in The Last One (Part 2), when Joey buys a chick and duckling as a housewarming present for Monica and Chandler, a throwback to the boys’ own feathery pets.

Unfortunately, Joey comes back to the apartment, only to realise that the baby birds have got themselves trapped in the table. Joey and Chandler are faced with the terrible prospect of having to destroy the table to rescue the birds, but when it comes down to it, they can’t bring themselves to smash it. That is, until Monica enters and is only too happy to rip it to pieces.

Monica may be organised on the surface – but she has a dark secret. Discovered by Chandler in The One with the Secret Closet, it’s a tiny section of the apartment that is an utter mess. You too can keep it secret and out of sight behind a swinging plate door, but you never know when minifigure Chandler might sneak across to see what’s inside…

“Look at me, I’m Chandler, could I be wearing any more clothes?”

A famous moment from one of the show’s most tightly-written episodes, The One Where No One’s Ready, Joey escalates an argument that began with Chandler taking his seat while he was in the bathroom to a memorable conclusion. Chandler had retaliated by hiding all of Joey’s underwear (much to Ross’s dismay as he tried to get the group ready for a black-tie event at the museum), and Joey’s response was to ‘do the opposite of stealing somebody’s underwear’, which, logically to him, was wearing all of his friend’s clothes.

Monica is the most organised – almost to a fault – of all the characters on the show. So naturally, in her apartment, there must be a to-do list lying around, with the majority of the tasks already taken care of. This particular list might be the one she wrote in preparation for the flight to England in The One With Ross’s Wedding (Part 1), where she ‘checked’ various items off out loud, much to the annoyance of Rachel.

Honestly, though, we imagine that Monica had lists for virtually every aspect of her life, so it could be anything. It’s a nice inclusion from the designers showing Monica’s hyper-organised personality.

A running gag through the show is Joey’s affinity towards food and, in particular, his feelings towards pizza, which have developed to such a level that he refers to the pizza place as ‘his friends’ and he has the ‘Joey Special’ named after him. What is the Joey Special? Two pizzas, of course. It’s a subtle nod within 10292 Friends Apartment, but we see both pizza boxes, and Joey will too.

“All right, what are we having?”

It’s rare within the show that we see a plot revolve around Rachel and Chandler, but when they do come together, it’s for a hilarious reason. Rachel accidentally-on-purpose steals a delicious cheesecake from another resident of their building. When both she and Chandler get a taste for the treat, it ends up in a battle between the two that leads to cheesecake falling straight on to the hallway floor.

Not to be bested, they both get down on the floor to eat what they can, only to be interrupted by Joey. Of course, Joey is never one to turn away good food, so he gets right down there with them to tuck in as well. It must have been one hell of a cheesecake…

“Well the Lions technically won, but it was a moral victory for the Green Bay… Mermen.”

Sports games are the entertainment staple for the friend group. It’s on in the background in so many scenes, whether that’s Phoebe and Chandler pretending to watch an important game to get out of helping with Thanksgiving dinner in The One with the Rumor, or the friends chatting about Joey’s next acting job with an American football game going on in the background. Having a play in progress completes the atmosphere in the living room and is versatile enough to match any scene you’re aiming to recreate.

Ugly Naked Guy is just as much a part of the show as any of the other side characters, even if he’s one we see the least of. He lives across the street from the girls and is observed by the gang doing a whole range of everyday tasks, made funny by his constant nudity and apparent ugliness. In The One with the Giant Poking Device, Phoebe is terrified she may have caused the death of our favourite off-camera extra by going to the dentist (don’t ask).

To make sure Ugly Naked Guy is alive, Phoebe, Monica, Rachel, Ross and Joey construct a giant poking device out of chopsticks, extending all the way across the street. Upon being poked, he wakes up and is thankfully alive – although understandably annoyed that he’s being poked. Later, Ugly Naked Guy will sell his apartment to Ross, moving away and never to be heard of again.

And, of course, the BarcaLoungers. The boys’ apartment wouldn’t be complete without Joey and Chandler’s trusty chairs, ready to welcome them home from a long day at work – or for Joey to spend a long day there doing anything but work.