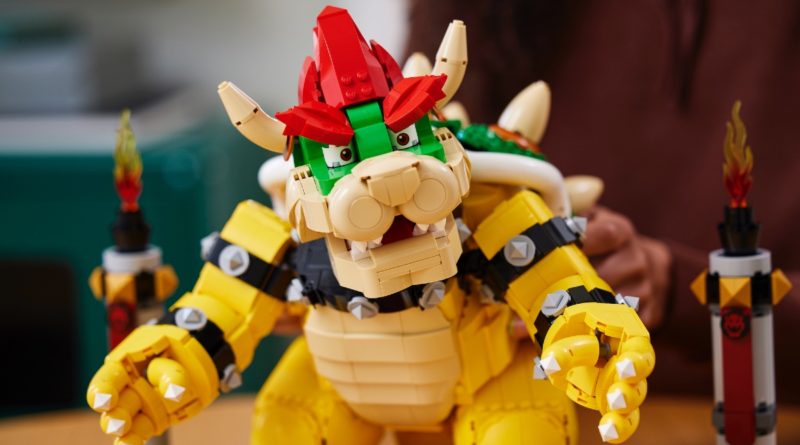 71411 The Mighty Bowser may be even more appealing than before, thanks to a recent discovery in a LEGO store display case.

The LEGO Super Mario theme has proven a popular entry in the LEGO Group’s lineup, with dozens of different sets appearing on shelves to date. However, these sets are typically aimed at the younger LEGO fan, focussing on interactivity over detailed dioramas. An exception to that rule is 71411 The Mighty Bowser, which popped up back in July.

While a few LEGO Bowsers have appeared already, this version is significantly larger and more detailed – closely mimicking his in-game appearance. That said he’s notably more toy-like than similar LEGO sets, functioning as a puppet as much as a display piece. Even so, he doesn’t quite gel with a lot of other LEGO sets – even if the Mario, Luigi and Peach figures of the Super Mario theme can interact with him.

If you’ve been on the fence about buying him (which, given his high RRP, is understandable) you may be tempted by a new Reddit discovery. The LEGO Reddit recently saw this picture added to it by Reddit user musix345; reportedly, the picture was taken in an official LEGO store, which seems borne out by the price tags in the picture.

Regardless of where it was taken, the photo suggests that 71411 the Mighty Bowser scales perfectly with 71374 Nintendo Entertainment System. This LEGO set recreates the beloved ‘80s game console, and includes a single brick-built controller which Bowser can hold. This allows him to ‘play’ a game of Super Mario Bros., thanks to an included television and some very smart engineering.

As such, if you’ve holding out on one you may now be tempted to spring for the other. Both sets are currently available for purchase at LEGO.com, but with each one costing £229.99 / $269.99 / €269.99, you may want to wait for a discount to present itself first.

Luckily, both sets have seen price reductions in the past – so buying both could prove easier than you may expect. Keep an eye on our LEGO Super Mario Black Friday page to see if any offers pop up in the next few weeks.