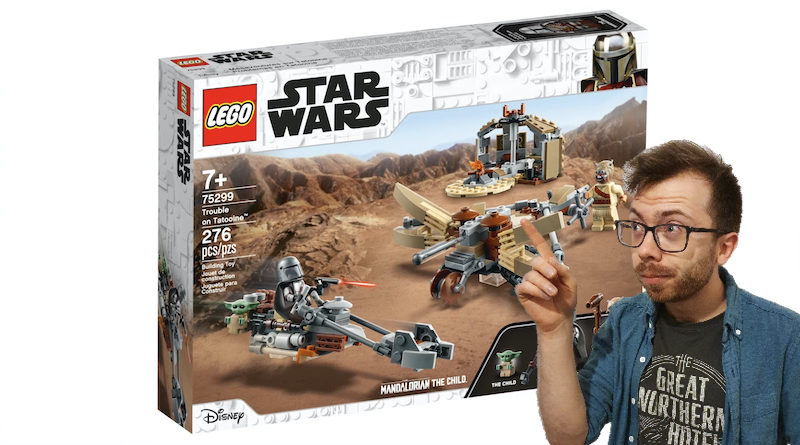 The newly-revealed 75299 Trouble on Tatooine isn’t the second coming of LEGO Star Wars, but it does point to the theme’s wider issues.

We’ve had very few sets based on The Mandalorian so far. That’s pretty surprising, given it’s basically the hottest thing in a galaxy far, far away right now. But then again, maybe it’s not that surprising. Maybe it’s actually totally emblematic of the theme as a whole. And maybe – just maybe – that’s why everyone’s going crazy over 75299 Trouble on Tatooine. But as a set, it’s really just… fine? I guess?

Look, I’m not arguing with the value proposition. The Child and Mando (in Beskar armour!) for less than £30 / $30? Great. What’s less great is the fact that you’re really only paying for those characters. Mando’s speeder bike is pretty good. But that ballista? That Tusken Raider hut? Yeah, thanks but no thanks.

They’re not terrible builds, but I imagine for most fans they’ll be a whole lot of nothingness. And Tusken Raiders are a dime a dozen nowadays – even if the LEGO designers had no knowledge of Cobb Vanth, as they didn’t with Baby Yoda (I mean, Grogu), reverting back to the same old character isn’t exactly setting the galaxy on fire. But it’s not like there weren’t other options.

It could have been as simple as a new cloth piece for the Tusken Raider minifigure. Alternatively, the LEGO Group could have genuinely pushed the boat out with a minifigure-scale Bantha. We’ve been waiting for a proper LEGO rendition of the enormous, hairy mammal since LEGO Star Wars II: The Original Trilogy teased it in videogame form. That was 14 years ago. All we’ve had since is a Microfighter version in this year’s 75265 T-16 Skyhopper vs Bantha Microfighters.

The real tale of 75299 Trouble on Tatooine is ostensibly one of missed opportunities. But the initial response online has been one of overwhelming positivity. And there’s only one explanation that I can point to: LEGO Star Wars fans don’t know how much better it could be.

Anyone who’s bought into the LEGO Star Wars theme for more than a year will already have borne witness to its descent into tired rehashes. It feels like X-wings, Landspeeders and original trilogy vehicles enjoy the lion’s share of the theme’s releases, while the prequels, sequels and TV shows are left to fight over the scraps.

Whenever a set pops up that isn’t a TIE Fighter, Snowspeeder or Jedi Starfighter, it’s hailed as incredible – even if it’s only really noteworthy for its minifigures. 75283 Armored Assault Tank (AAT) is a prime example of that, delivering a so-so tank with a couple of cool characters. 75299 Trouble on Tatooine fits into the same mould.

It doesn’t have to be like this, though. Just look at the LEGO Harry Potter theme for the proof. Almost all the sets in the renewed Wizarding World range deliver genuinely great designs and ample minifigure line-ups at pretty reasonable price points.

Compare that to this summer’s Star Wars line-up. 75284 Knights of Ren Transport Ship meekly offers up 595 pieces and three minifigures (one a straight repeat from last year), and expects you to pay £64.99 / $69.99 for the privilege. 75286 General Grievous’s Starfighter is even worse, with three minifigures and 487 pieces for £74.99 / $79.99. But the real problem with LEGO Star Wars goes beyond the cold, hard numbers.

To elaborate: all three of the characters included in Grievous’s Starfighter are appropriate for the scene. You need Grievous, obviously, and Obi-Wan to duel him. And there were definitely a few Airborne Clone Troopers hanging around on Utapau, so that makes sense. But I still have questions.

Questions like: why is the Jedi Master identical to the version that appeared earlier in the year in 75269 Duel on Mustafar? Where’s the heavily-requested Phase 2 Commander Cody minifigure? These opportunities for new designs feel like low-hanging fruit, and yet they’re continually and repeatedly missed.

So when the design team is given permission to pull out all the stops, as it seemingly has done with Beskar Mando, it’s no wonder the LEGO Star Wars fanbase erupts with joy. But one minifigure alone can’t stop 75299 Trouble on Tatooine coming across as ultimately half-hearted. And for veteran fans, it certainly won’t save another LEGO Star Wars wave that’s otherwise comprised of – you guessed it – X-wings and TIE Fighters.

There’s clearly an appetite out there for the theme to move beyond its staples, too. 75280 501st Legion Clone Troopers has come in and out of stock more times than I can count. The Republic Gunship won this year’s Ultimate Collector Series fan poll. The kids who grew up with the prequels are now adults, ready to buy into sets beyond the original trilogy. And they’re also showing their kids the prequels.

Let’s hope the apparent success of this year’s The Clone Wars and The Mandalorian sets can demonstrate that appetite to the LEGO Group – and, in turn, it can transform LEGO Star Wars into a theme that feels a little less stagnant, a little less out of touch, and a little more willing to properly push the metaphorical boat out into a galaxy far, far away.