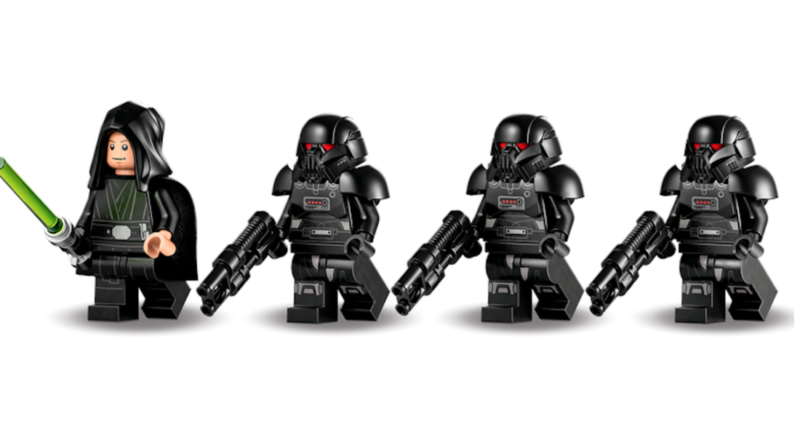 The long-rumoured 75324 Dark Trooper Attack was finally revealed yesterday, giving us our first detailed look at the minifigures included with the set. At first glance Jedi Knight Luke Skywalker and the three Dark Troopers may seem to have previously been available, but there are actually new printed parts that make them stand out as being exclusive to this set.

Luke Skywalker in his black Jedi Knight robes (albeit without hood and cloak) has appeared in number of LEGO sets over the years, including 10188 Death Star and 10212 Imperial Shuttle. Whilst those versions are very similar, the 75324 Dark Trooper Attack minifigure has some subtle differences. There’s all-new printing on Luke’s torso, showing his robes tucked into a belt that features a redesigned hook from which to hang his lightsaber. It’s a small, but significant detail that’s much appreciated. His leg pieces also benefit from some added printed detail.

Likewise, the three Dark Troopers in the set haven’t been redesigned from the ground up but do benefit from a touch of cosmetic tweaking. These aren’t simply the same as the lone (and highly-desirable) Dark Trooper minifigure that was included with the pricey 75315 Imperial Light Cruiser. A closer look at the torso of each Dark Trooper also reveals new printing, even though much of the revised design can’t be seen unless the shoulder armour piece is first removed.

None of these visual upgrades make the 75324 Dark Trooper Attack more or less desirable, but it’s certainly great to see the LEGO Star Wars designers making modifications to existing characters. We could have ended up with straightforward repeats of previous minifigures, but instead are presented with more unique characters to add to our collections.

75324 Dark Trooper Attack has been added to the official LEGO online store and will be available for purchase from March 1.