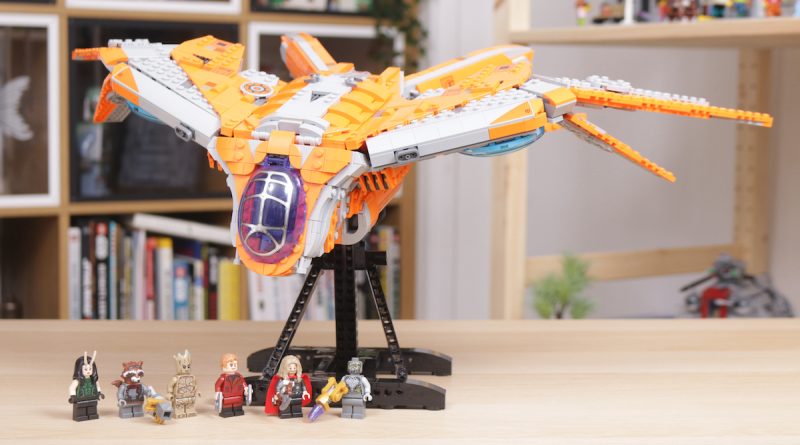 As LEGO Marvel goes from strength to strength, it’s important not to overlook one of the theme’s hidden gems before it’s too late – 76193 The Guardians’ Ship.

Released in June 2021, 76193 The Guardians’ Ship launched as part of a quite remarkable wave of LEGO Marvel sets that today sit as a pivotal moment in the theme’s history. This collection of releases well and truly signalled the theme’s intentions to not only stick around for the long term with more dedicated, accurate sets based on what we have actually seen on screen in the Marvel Cinematic Universe or in the pages of Marvel comics, but to also explore several brand new and exciting creative directions all at the same time.

Case in point: alongside 76193 being part of a carefully-curated selection of sets that offered a dedicated, far more accurate revisit of Avengers: Endgame, came 76191 Infinity Gauntlet, the first of the theme’s more bespoke, larger-scale collectible items that has since been followed by the likes of 76223 Nano Gauntlet, 76209 Thor’s Hammer and 76215 Black Panther.

Additionally, launching at the same time as all this was the eye-catching, horizon-dominating 76178 Daily Bugle – the LEGO Group’s first ever skyscraper that well and truly reimagined what was possible for LEGO Marvel in scale, detail and sheer LEGO audacity.

And within all that was happening in June 2021 sat 76193 The Guardians’ Ship – gorgeous in design, large in size, proud on display and barely able to get a word in that summer. It was certainly unanimously praised by critics at release and is enjoying the same extended run on shelves as 76178 Daily Bugle.

But as part of a wave of LEGO Marvel sets that had bigger headlines elsewhere, and as part of a theme that continues to push forward with big release after big release, one of the sets that is responsible for kicking everything off risks being overlooked entirely.

76193 The Guardians’ Ship should be placed well and truly in the same standing as 76191 Infinity Gauntlet for what it signalled in design change, and heralded alongside 76178 Daily Bugle for just how well it realised its goal.

As mentioned, 76193 was part of the LEGO Group’s wave of summer 2021 releases that took the time and effort to properly look back on Avengers: Endgame and create a more definitive collection of movie-accurate sets. Based on the Guardians of the Galaxy’s much larger, ‘M-class’, orange and silver time-travelling spaceship, the Benatar, the LEGO Marvel team fully embraced the opportunity to impress across size, accuracy and all-round LEGO fun.

76193 The Guardians’ Ship is one of the LEGO Group’s first non-Star Wars ships that can rival the LEGO Star Wars line for just how authentic it looks and feels, both to put together and then sit on display (okay, yes, and swoosh around). This is a weighty, wide beast of a LEGO model with all sorts of quite remarkable design tricks built into its solid core and expansive wings.

Those tricks amount to any number of techniques – some visible, some hidden – that help bend and weave a sizeable number of LEGO pieces up, down and outwards to perfectly capture every subtle change in direction that can be found in the Benatar’s wings.

LEGO Marvel The Guardians of the Galaxy Ship Set 76193

LEGO Marvel The Guardians of the Galaxy Ship Set (76193) 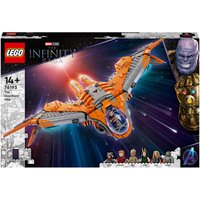 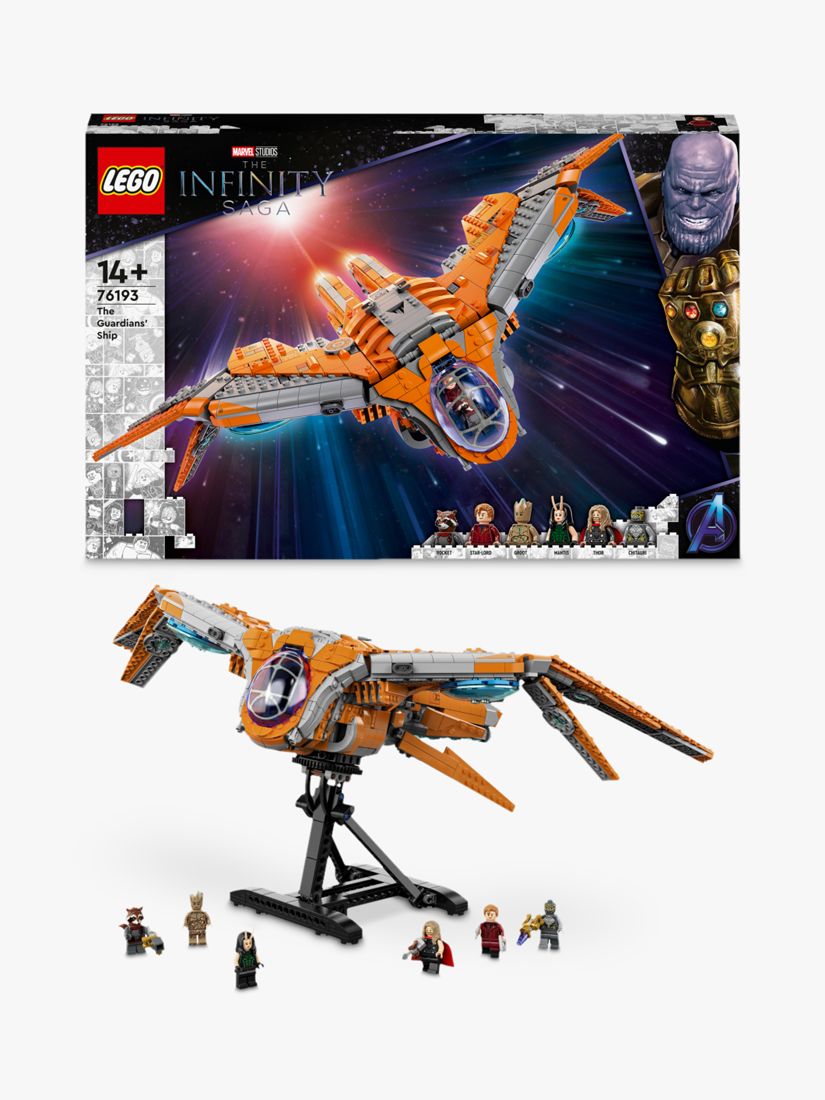 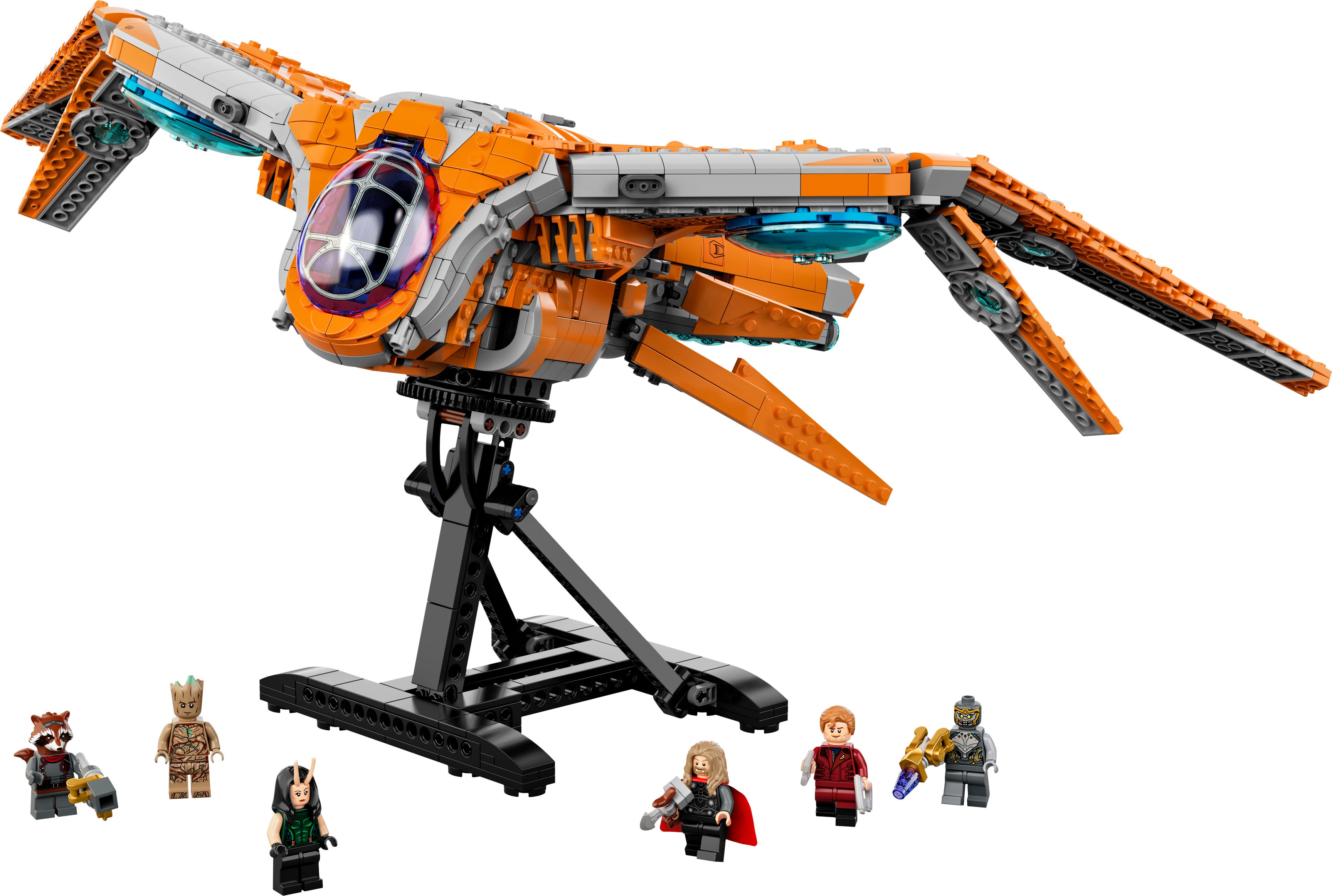 The work that has gone into these wings alone breathes a life and authenticity into 76193 in a way we can barely recall having happened previously to a set in LEGO Marvel’s history, and it is of course complemented by similar attention to detail through the body of the ship, in a way that also offers space and play for younger fans in the interior, complete with seating for all the characters included in minifigure form.

There is a rare, perfect balance caught in the design of 76193 The Guardians’ Ship, between authentic beauty and hands-on fun LEGO building, and it all comes together for the complete build, play and display experience.

And the best thing about it? The 360-degree spinning display stand. Not only does the set come with something to stand it on display, but it is set at an angle and you can rotate it around, opening up any number of dynamic poses to fully enjoy the model once built. Display stands for large LEGO spaceships aren’t a given at all, so the fact that this set has one and it is so wonderfully functional too really adds to its all-round unique appeal.

76193 The Guardians’ Ship is 18 months old and is set for another year left on shelves, so it sits awkwardly at the moment – it’s not the shiniest, newest LEGO Marvel release, nor is it anywhere near the biggest. There are no records being set here, barely a highly-desirable or exclusive minifigure to be seen. Yet 76193 The Guardians’ Ship stands as one of LEGO Marvel’s greatest achievements that, just like some of the other sets it was released alongside, hopefully marks a significant moment in the theme’s history for when things got really good.

This LEGO set was provided by Zavvi, but all opinions remain our own. For those wanting to avoid missing out on 76193 The Guardians’ Ship, Zavvi currently have it listed in their LEGO Black Friday deals with a hefty 21% off, and you can support the work that we do by purchasing your copy via our affiliate links. As we say, don’t sleep on this set, because you’ll regret it when it’s finally gone.