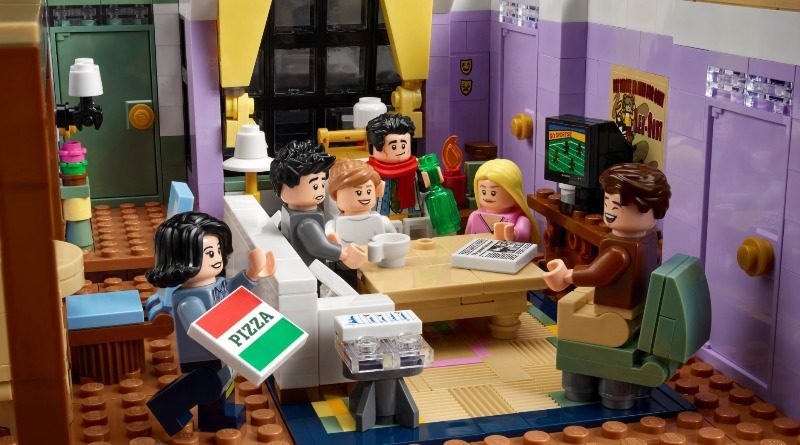 Friends fans will no doubt have been excited to see so many funny references in LEGO 10292 The Friends Apartments – but were there some missed opportunities as well?

With so many memorable moments in Friends’ ten years on our screens, no LEGO set will ever have been able to include them all. Still, we found a few that we thought would have been worth including. Here are some of our favourite moments missing from 10292 The Friends Apartments.

“Is everybody else seeing a Troll Doll nailed to a 2×4?”

The Geller Cup is, as Chandler describes it, just a Troll Doll nailed to a 2×4. But to the Geller siblings, it’s much more than that. When they were kids, they battled it out to win this cup every year on Thanksgiving. Their American football games got so competitive and violent that, eventually, their parents banned them both from ever playing football again and threw the Geller Cup into the lake – or so Ross thought.

It turned out that Monica fished it out of the lake and used it years later to entice Ross into playing a game of football with the whole gang. It would have been great to see this ugly little trophy tucked away on a shelf in Monica’s kitchen, as a nod to that fateful Thanksgiving rematch in The One with the Football.

The book in the freezer

“Why do you have a copy of The Shining in the freezer?”

Joey Tribbiani may not be a big one for reading, but there’s one book that he kept coming back to time and again – and that’s The Shining. However, whenever it got too scary, he would tuck it away in the freezer for safety, as discovered by Rachel in The One Where Monica And Richard Are Friends. Having a tiny LEGO version of The Shining would probably have made minifigure Joey feel a lot more secure in his brick-built apartment – plus it would have been a fun find for LEGO Friends fans.

“You know what? Bet you I could fit in there.”

While we do have the canoe, the white dog, and the BarcaLoungers, the entertainment unit is almost the centrepiece of the boys’ apartment. It plays a pivotal role in the design of the boys’ apartment, when Joey’s attempt to convince someone that he can fit inside a compartment of it results in him getting shut inside and all their stuff being stolen.

It also explains why Chandler’s bedroom door is sawn in half, a casualty of Joey’s efforts to build the entertainment unit himself. A version of the boys’ apartment with it in would have been a fun inclusion – oversized, of course, to match Joey’s amateur woodworking skills.

We keep referring to the left-hand apartment as the boys’ apartment, but Chandler actually moves out of it in Season 6 to join Monica across the hall. When he does, Joey brings in a supermodel housemate and she starts to make the apartment more feminine, including putting up a photo of a baby, apparently a famous piece of art.

This is missing from 10292 The Friends Apartments, and the rest of the art in the set often looks quite a bit different to the show itself as well. This is likely because the LEGO Group needs to recreate interpretations of art, particularly out of practical reasons, with some artworks being too detailed to recreate in sticker form, and partly due to copyright.

“If only there was a smaller one to clean this one!”

It’s no secret that Monica is a bit of a neat freak. The set does include her secret messy cupboard, tucked away in the back, but it would have been great to see a nod to her obsessively clean personality. For example, one of her most neurotic moments was when she pulls out a smaller vacuum cleaner to vacuum her full-size one – and then wishes she had a smaller one to clean that one! How on earth will minifigure Monica keep the apartment clean without at least two vacuums to hand?

“Please trust me, I buy 30 fashion magazines a month.”

Her minifigure might have a stylish outfit, but anyone who knows fashion-loving Rachel Green would know that just one outfit is never going to cut it. She works in fashion, lives fashion, and is always dressed in of-the-time style. So much so that Friends fans often joke that you can track the year and season of the show according to Rachel’s hair and outfit choices. It would have been great to have some outfit options for the minifigure, or even some extra hair pieces, to add a bit of variety.

“Hey, my sweater! I’ve been looking for this for like a month.”

One of the most shocking and impactful twists of the series is when Ross reveals that he is the owner of a certain red sweater – and therefore also the father of Rachel’s child. Considering the baby, Emma, is a big part of what keeps Ross and Rachel on good terms and in contact with one another in the years leading up to them finally getting back together, it’s a huge moment for the series and would have been fun to see in the set, draped over a side table or on the kitchen counter in the girls’ apartment.

“I can’t believe you’re going to have a baby!”

Throughout the 10 seasons, a lot of kids come into the gang’s lives. Season 1 kicks off with the birth of Ben, Ross’s first son, then Phoebe gives birth to her brother’s triplets as a surrogate, Rachel and Ross have Emma together, and Season 10 closes with Monica and Chandler adopting their own baby twins. Yet there’s no reference to any of these younger characters. It would have nice to see a stroller parked in the corner of one of the apartments, or a baby bottle on the counter, to give some sign that kids are often hanging around the apartments too.