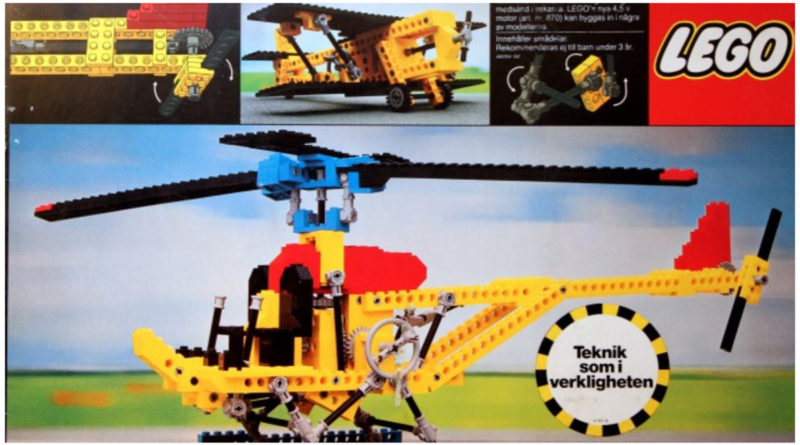 With a new model due to fly in next month, we take a look at the range of LEGO Technic helicopters over the past 45 years.

“Helicopters don’t fly, they vibrate so badly the ground rejects them.” So said author, Tom Clancy. The helicopter is a strange machine indeed and something of a rarity in the LEGO Technic range, with only 14 appearing in the 45 years since Technic was launched, way back in 1977. With the latest in the line up, 42145 Airbus H175 Rescue Helicopter, due to be launched on August 1, we look back over some of the models that have gone before.

Technic was launched in 1977 as Technical Sets, until it became Technic in 1982. In that first five years we had a grand total of two sets, 852 Helicopter and 8844, er, Helicopter. Clearly marketing was still in its infancy. Both sets were typical of Technic at the time, skeletal with just the suggestion of bodywork, and with only a few hundred pieces, were more of a pocket money plaything than an engineering marvel.

In the years up to 2010, the LEGO Group produced another four helicopters, all small sets with a spinning rotor about the only function to be seen. Nothing was motorised, relying on hand-cranked gears to spin the blades. It’s only in 2011, with 8068 Rescue Helicopter, that things start to pick up. With over 400 pieces, the designer is able to make a realistic looking aircraft that has working rotors (still hand turned) but also has opening doors, a winch and retractable landing gear.

The following year, however, things really step up a gear. 9396 Helicopter is launched (the Marketing department are, presumably, still out at lunch), and with just over 1000 pieces, the designer has gone to town. The yellow and red bodywork looks realistic (or as realistic as a Technic set got, a decade ago) but while the functions are still hand-powered by default, the manual includes instructions for adding Power Functions. Those functions include the rotors spinning, a working winch, retractable undercarriage and an opening rear ramp. The most notable function, however, is a working collective. This allows the angle of the main rotor blades to be adjusted, as on a real helicopter. The steeper the angle, the greater the lift. Being able to adjust the angle of four blades, as they’re spinning, is no mean feat.

As we come up to date, we have another handful of small, impulse purchase models including, from 2014, 42020 Twin-rotor helicopter. This small set, at 145 pieces is the only Technic helicopter to date to feature the Chinook-style fore-and-aft twin rotors. 2016 sees the only other large scale aircraft, 42052 Technic Heavy Lift Helicopter. This set comes with a Power Functions kit included, and the standout feature is that is has two, contra-rotating main rotors. Because this negates the torque twist that is inherent in single prop helicopters, it has no tail rotor, making it relatively short.

Despite having almost exactly the same number of parts as 9396, it’s a larger set and includes a winch, opening cargo doors, an opening ramp and, of course, functioning rotors. Because of the complexity of the two-prop, six blade setup, it’s impossible to include a working collective on this set and so the aircraft has, effectively, no flight controls at all,

This August sees the release of the first licensed Technic Helicopter, 42145 Airbus H175 Rescue Helicopter – it has nearly twice as many pieces as the previous largest machine, so it will be interesting to see whether the designer has managed to raise the bar again.

You can support Brick Fanatics by buying your LEGO via our affiliate links. Thanks.