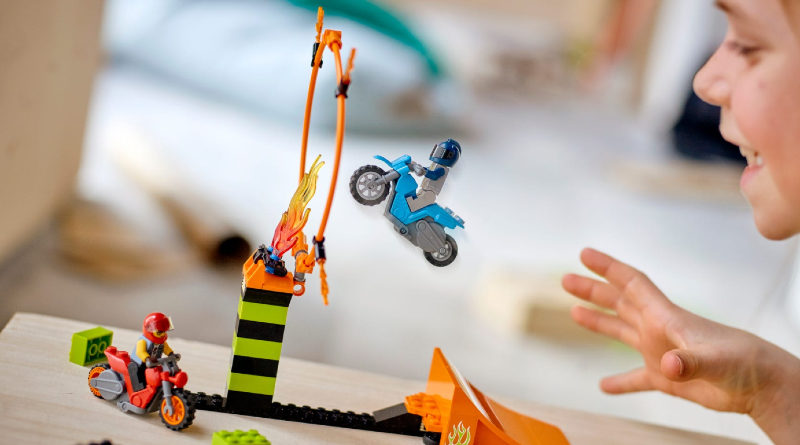 LEGO CITY is continuing to feature its eclectic cast of characters from various professions in the current and upcoming sets, include a returning police officer in the new Stuntz range.

In recent years, the LEGO Group has introduced a few recurring characters for the LEGO CITY theme, tying into the accompanying TV series. That concept doesn’t seem to be stopping anytime this soon as this summer’s Stuntz sets feature Police Officer Duke DeTain in a new role.

Potentially calling back to the last prominent character of LEGO CITY, Chase McCain, Duke has decided to pursue a new career in 60299 Stunt Competition as he makes the new flywheel motorbike through a flaming hoop. We’re sure that if he’s doing it, then it’s perfectly up to code.

It also seems that there may be another hidden reference within the new LEGO CITY model as we can’t help but recognise that his outfit and helmet resembles Clay from the NEXO KNIGHTS, with a distinct blue and silver colour scheme mirroring the armour from the first season. It even reuses the helmet piece from that theme, likely confirming the reference.

This is far from the only reference in the new LEGO CITY range as another returning character graces 60293 Stunt Park and a LEGO Games icon features in one of the miniature motorbike models. Even the upcoming LEGO CITY 2021 Advent Calendar references the subtheme itself.

LEGO CITY Stuntz will launch on October 1 on the official online store but if you can’t wait that long for some brick-built action from what might the world’s most diverse city, then two of the theme’s models are currently worth double VIP points.