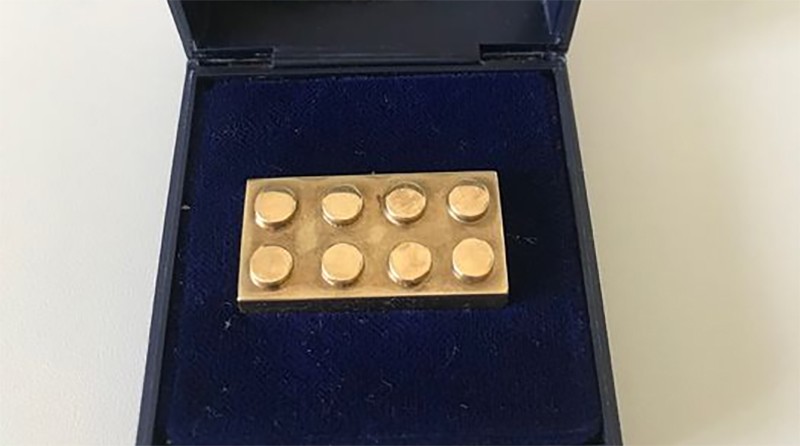 This LEGO brick that’s up for auction really is as valuable as gold… because it’s literally made from 14 karat gold.

This week there’s the opportunity for a true piece of LEGO history with a 2×4 gold brick, as well as a selection of other appealing items, including the San Diego Comic Con Zebra Batman, the limited edition 40501 The Wooden Duck and the long retired 10226 Sopwith Camel.

Time and again, headlines promise that LEGO is as valuable an investment as gold. In this auction from Catawiki, it really will be, because it’s a LEGO item made from 14 carat gold. Given how rare this item is, it’s a collector’s dream.

These golden 2×4 LEGO bricks were given to employees who had done something special at the LEGO Group – in this case, a German employee has improved the systems for selling into the market and received this brick as a gift in 1971. The boxed brick even comes with the letter he received as a thank you for his efforts.

While ‘rare’ LEGO sets are appealing, they are still manufactured in the tens or hundreds of thousands. Items like this, that were given only to select employees are genuinely rare in the truest sense of the word – less than 10 of these gold bricks are believed to exist.

Not everyone has the deep pockets for a gold brick though, and some of those whop do would rather just splurge on some sets. 40501 The Wooden Duck, the new LEGO House exclusive, sold out quickly during the recent Secret Life of LEGO Bricks book launch, but there’s a copy of the set up for auction at Catwiki. Given how limited travel is at the moment, it’s a great chance to get this limited edition set.

With DC FanDome coming this weekend, all eyes with be on the shiny new Supergirl minifigure. But there have been many interesting DC exclusive minifigures over the years, including last year’s Zebra Batman. While the unique minifigure won’t come cheap thanks to its limited availability, it’s only going to climb in value as the years progress; anyone who fancies this minifigure might do well to acquire it now rather than wait.

For those who would like a taste of Creator Expert before it was Creator Expert, 10226 Sopwith Camel is up for grabs in a brand new and unopened box. The incredibly detailed aircraft model was released back in 2012 and has since been climbing in price on the aftermarket.