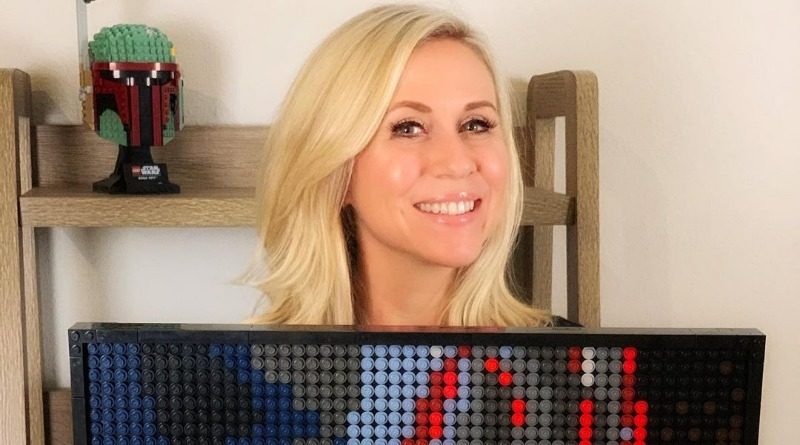 Ashley Eckstein – the voice of Ahsoka Tano – has been busy building the LEGO Art set 31200 Star Wars The Sith.

She may have voiced Anakin Skywalker’s padawan in Star Wars: The Clone Wars and Star Wars Rebels, but Eckstein clearly didn’t find assembling a mosaic of her fallen on-screen master too painful. The voice actor shared an image on her Instagram profile of herself with the finished artwork.

“I love to build LEGO sets with my nieces and nephew, but sometimes I just want to wind down, destress and build something on my own,” she wrote. “There are SO many amazing LEGO sets to choose from, and while I’m a total light side girl, I will always love Darth Vader.”

Eckstein’s post is technically sponsored by the LEGO Group, which provided copies of both 31200 Star Wars The Sith and 75277 Boba Fett Helmet for her to build. But if you can join us in taking off our cynical hat for a moment, it’s still cool to see the actor who brought Ahsoka Tano to life indulging in our favourite hobby.

You can watch Eckstein assemble 31200 Star Wars The Sith over on her Instagram story, but do so quick: it won’t stick around forever (unless she chooses to feature it on her profile).

It’s not the first time the LEGO Group has turned to Eckstein in a promotional capacity. Back in April 2020, the Star Wars actor also built her own astromech droid from BOOST 75253 Droid Commander for LEGO MASTERS USA.

Ahsoka Tano is currently available in minifigure form in 75283 Armored Assault Tank (AAT), a set that Eckstein apparently doesn’t own. Presumably she already has one of the older Ahsoka minifigures, because – if we were in actual Star Wars – we definitely wouldn’t be able to rest until we owned LEGO versions of our characters. (Maybe we’re just vain.)