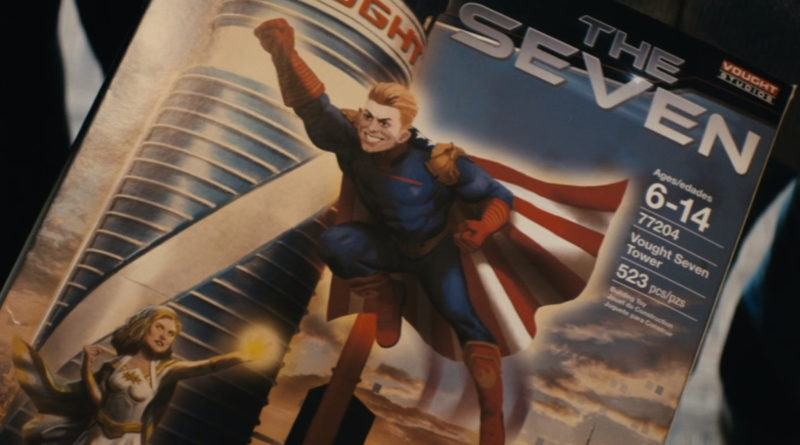 The Boys – a hit superhero TV show in its third season – has paid tribute to LEGO sets in a recent episode.

Amazon Prime Video’s The Boys is an action-packed superhero show, aimed at the mature superhero fan. Based on the comic book of the same name by Garth Ennis and Darick Robertson, it follows a group of vigilantes committed to defeating corrupt superheroes. Both the original comic book and the show it inspired are known for their extreme violence, bad language and sexual content.

As such, it’s unlikely that the LEGO Group will pick the show as a licensing option. But that hasn’t stopped The Boys from paying tribute to LEGO anyway. A shot of a licensed construction set can be found in the second episode of The Boys’ third season, making a clear reference to LEGO box art.

As this image comparison with 76038 Attack on Avengers Tower makes obvious, the source of inspiration for Vought Seven Tower is undeniable. The font, the information and the order it’s presented in is essentially identical to a real LEGO set (although, at the time of writing, the LEGO Group has not assigned the number 77024 to a set).

This isn’t actually the first time The Boys has incorporated LEGO or its packaging into its story. A previous episode of the show saw young character Ryan create an impressive LEGO stop-motion tribute to sports movie The Blind Side. While we’re sceptical a character like Ryan created it himself, it may prove to be a more plausible element of the show overall.

Support the work that Brick Fanatics does by purchasing your real-life LEGO using our affiliate links.