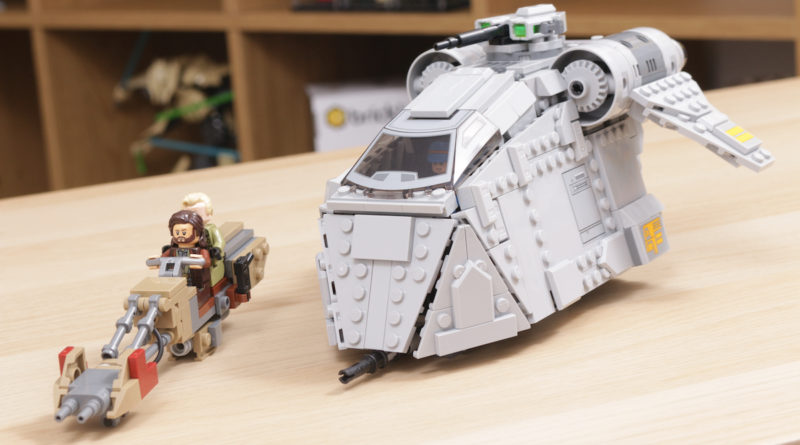 Star Wars: Andor is well into its first season, showcasing the context for the series’ only LEGO Star Wars set so far.

Andor is arguably different to other Star Wars Disney+ series, with a slower pace that helps to develop characters and showcase the various locations and vehicles to better appreciate the detail. We’re about to delve into spoilers for the first five episodes of Andor.

This week, we’ll be halfway through the first season’s 12 episodes, and it would appear we’ve seen all we need to understand 75338 Ambush on Ferrix. The model appears to be inspired by the first three episodes of the series, which were released at once, and features a speeder bike and Mobile Tac-Pod.

With much of the set going towards the Mobile Tac-Pod, the build’s accuracy to the vehicle in the show is arguably impressive. While much of the interior is dedicated to structural support, the cockpit’s limit of fitting only one minifigure is matched by the series.

The rest of the interior being a bit cramped is also accurate, serving to showcase how limited non-Empire security is in this era of a galaxy far, far away. That’s a topic that Andor explores further in the fourth episode. However, it’s not the most enticing aspect of 75338 Ambush on Ferrix in the context of the series.

The LEGO Star Wars Andor model is available now with minifigures of Cassian Andor, Luthen Rael and Syril Karn. Before the show, only one of those characters was recognisable thanks to Rogue One. However, both Luthen and Syril have continued to be featured in the series after it left Ferrix.

The show is seemingly splitting attention between these three characters and their individual development, from spending time at home to another life on Coruscant, instead of just Cassian Andor. We’ve already explored Syril in detail here.

Choosing these three characters as minifigures in 75338 Ambush on Ferrix despite the numerous other characters featured in the show’s first three episodes appears to be no mistake.

Syril and Luthen may be playing a larger role in Andor than initially expected but we’ll have to see the other seven episodes to know for sure. A second season has also been confirmed but don’t expect it for a while.

75338 Ambush on Ferrix is available now, with double VIP points, on the online store for £69.99 / $69.99 / €79.99 and is the only set at the time of writing to include Cassian Andor, Luthen Rael and Syril Karn. Andor is streaming now on Disney+ and had high ratings at launch.