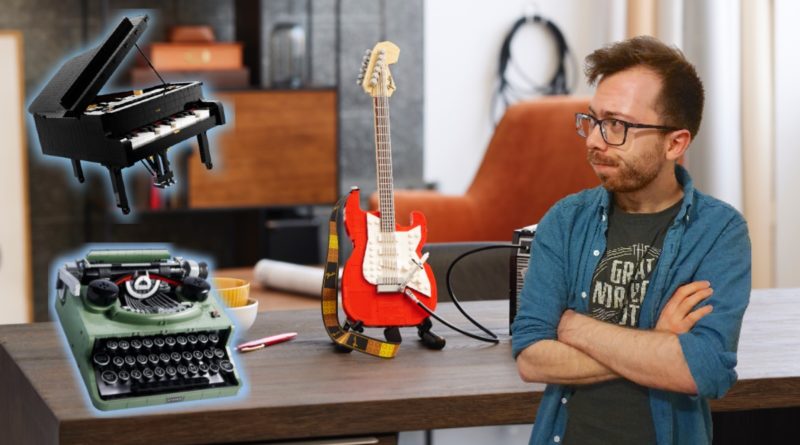 Every other crowdsourced set that’s debuted in 2020 and 2021 has sailed past the triple-figure asking price, maxing out at £319.99 in 21323 Grand Piano. Anyone angling for a complete collection of LEGO Ideas sets since the ISS will have had to part with an eye-watering £1,330 to keep up. (Not that anyone will or should have wanted to, but I’ll come to that later.)

So, why the big swing towards huge Ideas sets? The LEGO Group says it’s following ‘the organic movement of the community and the platform’, which has apparently been ‘a movement towards pretty big sets’, in the words of the LEGO Group’s Senior Marketing Manager Monica Pedersen. But that doesn’t really explain 21329 Fender Stratocaster.

Plucked from the finalists of last year’s ‘Music to our Ears’ LEGO Ideas contest, Tomáš Letenay’s original submission pitched everything you see in the final model: a guitar, an amp, a foot pedal, and the cables to connect it all together. But where those builds came in at a collective 676 pieces, the official set takes things all the way up to 1,074 bricks.

Even if you haven’t built the set, it’s immediately clear from the official images where those additional parts have gone: first, into including a detailed (but largely hidden) interior in the Princeton Reverb amp; and second, into offering two different colour options for the Fender guitar.

Those aren’t necessarily issues with the set, because more detail and customisation are strong traits to find across any LEGO product. But the side effect of their inclusion is a set that’s once again knocking on the door of the £100 mark, demanding way more of your LEGO budget than a more straightforward interpretation of Letanay’s design might have.

And if I’d cracked open that box earlier this month to build a simple amp and just a red guitar, I probably wouldn’t have been any less impressed with what I ended up with. As is, the black pieces for the alternate Strat body have just been folded into my wider part collection, and the amp’s sitting on a shelf, its circuitry and speaker totally hidden.

More pertinently, though: is bumping up the piece count (and, therefore, the price) of what could have been a more wallet-friendly set really following the organic movement of the community? Not really – but then, 21329 Fender Stratocaster technically wasn’t chosen by the community. The LEGO Ideas judges picked it from the ‘Music to our Ears’ contest entries, then chose it from their nine finalists to become a future Ideas set.

In fact, that actually makes it the first LEGO Ideas set to hit shelves with practically no major support from the community. (In the end, it only managed seventh place in the contest’s fan poll, with just 427 votes.) So, fair enough, the fact that it doesn’t quite gel with Monica’s assertion that the community is actively seeking bigger and better sets makes sense.

But plenty of smaller LEGO Ideas projects make it to 10K, too. Dozens have reached the review stage over the past couple of years, including a record-breaking 57 in the first 2021 review. But the LEGO Group seemingly keeps choosing only the biggest projects to turn into official sets, rejecting smaller submissions – some of which we’ve since seen in the BrickLink Designer Program – at the final hurdle.

At this rate and volume (no LEGO Ideas set has come in at less than £50 since 2018’s 21314 TRON: Legacy, even while the number of Ideas sets steadily increases), how can anyone possibly hope to keep up? The simple answer, of course, is that you don’t have to buy every LEGO Ideas set. And that’s totally reasonable, given the entire thrust of the platform is to produce a huge variety of sets, each one different from the last – either in subject matter, scale or focus.

But it’s also just as possible for people to have an equally wide range of interests, and for every one of those varied Ideas sets to catch your eye. I’ve managed to get my hands on a good few of the ones I’ve been after this past couple of years – 21322 Pirates of Barracuda Bay, 21325 Medieval Blacksmith – but I’ve had to let others slip by, purely for budgetary reasons.

I might have been interested in 21323 Grand Piano, for instance, but I don’t have a spare £320 lying around for a set that only really justifies its cost through functions I’m not bothered about. Likewise, 21327 Typewriter would have been a nice desk accessory, but I really wasn’t expecting it to come in at a blistering £180.

The crux of this column essentially boils down to: when will we see another cheap LEGO Ideas set? Looking at what’s still to come from those projects already given the green light, probably not any time soon.

Sonic Mania is rumoured to come closest at €69.99, but the latest reports peg Home Alone at an eye-watering $250. Guillaume Roussel’s Earth Globe submission includes 2,060 pieces, so would need some serious (and both undeserved and unwanted) reworking to bring the price point down; as would Vincent van Gogh: The Starry Night, which Truman Cheng used 1,552 bricks to bring to life.

Even further down the line, Sandro Quattrini’s Motorized Lighthouse is likely going to break the bank again, requiring thousands of pieces and electronics to render in a way that’s reflective of the original concept. All of these sets will no doubt be brilliant additions to the Ideas line-up – the designers know what they’re doing – but that really just feeds into the problem when they’re all likely to be so expensive.

There’s nothing inherently wrong with large LEGO sets, at least beyond vague worries about market oversaturation (particularly considering the enormous products hitting shelves across other themes simultaneously), and nobody should feel entitled to buy everything the LEGO Group puts out.

The solution I’m grasping at isn’t really pulling back on any of the sets Ideas has already given the green light to: it’s just giving us more choice at the lower end of the price scale, and thereby catering again – as Ideas once did – to a wider range of LEGO budgets.

2 thoughts on “Are LEGO Ideas sets getting too expensive?”