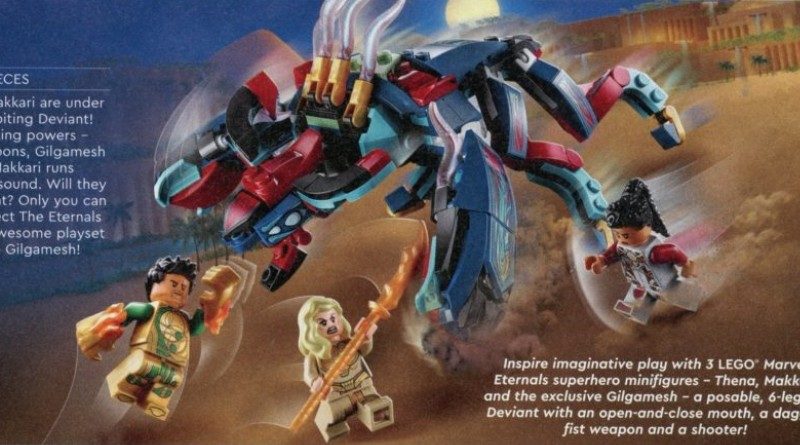 The LEGO Marvel Eternals have been revealed in a new Canadian Catalogue, despite the film releasing in November, leading some to believe that their inclusion might have been a mistake.

When it comes to the LEGO Group and Marvel, spoiling the movies isn’t anything new with sets usually being revealed before a movies’ release. From these sets, fans can see characters and some potential plot details, but with Eternals releasing late into 2021, why are the LEGO Marvel Eternals sets in a January catalogue?

Ashnflash explored this topic in a new video, after revealing high-quality images of the sets from the catalogue. These images are from his copy, which he scanned himself. From this video, we can see better images of the minifigures and sets.

At the start of the video, Ashnflash mentions that a local LEGO store had no stock of the sets or their release date, despite them being in the first catalogue of 2021. The year has now started and there is no mention of these sets from the LEGO Group so far.

From the images that have been included in the catalogue, there is no evidence or suggestion of a release date, with a ‘new’ label simply being attached to each set. With this being a January catalogue, it might indicate that they will launch in the first half of the year, but nothing is confirmed.

Ashnflash wonders this too and explains that none of the other known sets releasing in the first half of the year are included in the catalogue. This includes the remaining LEGO Marvel sets, some Minecraft models and three more LEGO Star Wars sets.

With none of the sets releasing later in the year in the catalogue, it suggests that this selection is for sets out January 1 or near to that date. Consequently, it’s possible that these sets, while finished, had been planned to be delayed along with the release of the movie.

As for the movie itself, very little has been revealed. Officially confirmed details include cast and characters as well as the suits. Some concept art has revealed a Celestial but otherwise, there is no official trailer and very limited plot details, not even a mention of the deviants.

Other toy lines based on the movie have had figures made as well, with the Marvel Legends line giving a closer look at a suit design in September 2020, as reported by The Direct. This might suggest that the toys were created ready for the original release date and production had not been pushed back, giving a reason as to why these sets were included in the catalogue.

As far as it can be seen, the merchandise for this movie may have been produced ready for the original November 2020 release date. However, with the film being pushed back by a year, it’s entirely possible that a portion of the merchandise was pushed back with it. At this time we do not know if this includes the LEGO Eternals sets or not.

With little details regarding the movie and another 10 months before its release, there is a possibility that these sets were not meant to be revealed, and may have been left in from an early draft. However, they may also be planned to release before the movie with official reveals kicking off a marketing campaign, giving a reason for their inclusion.

At this time, it is unknown when 76145 Eternals’ Aerial Assault, 76154 Deviant Ambush, 76155 In Arishem’s Shadow and 76156 Rise of the Domo will release, or if their reveal was intentional. Either way, it seems very likely that these sets will release at some point this year.