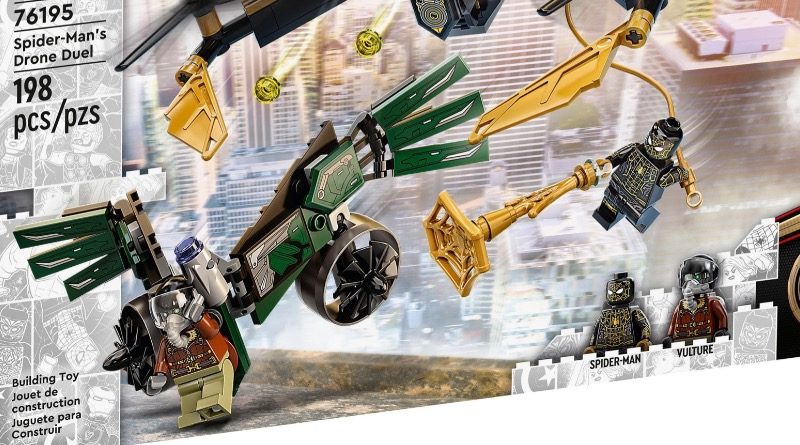 The LEGO Group’s three new Spider-Man sets appear to draw from the web-slinger’s entire trilogy of Marvel Cinematic Universe films – but are they actually all a huge spoiler for the latest movie?

All three of the newly-revealed sets carry the Spider-Man: No Way Home branding, reflecting the upcoming third Marvel Cinematic Universe outing for Tom Holland’s wall-crawler. But according to the box art, only one of them is actually explicitly based on that movie, while the other two carry labels stating that they’re ‘inspired by’ Spider-Man: Homecoming and Spider-Man: Far From Home.

You don’t need to be a bona fide Marvel nerd to notice, however, that the LEGO Group appears to be playing fast and loose with the events of those two films. 76195 Spider-Man’s Drone Duel, for instance, features a black-and-gold Spidey suit that seemingly has no basis at all in either Marvel comics or movies, and especially not in Spider-Man: Homecoming.

Unless, of course, it’s actually a huge spoiler for the events of Spider-Man: No Way Home.

For months, Marvel fans have been theorising over the possibility of the third Spidey film expanding the MCU’s multiverse. The presence of Doctor Strange in the only LEGO set based explicitly on the movie – 76185 Spider-Man at the Sanctum Workshop – lends further credence to that hypothesis, given the character’s next film is subtitled ‘in the Multiverse of Madness’.

If Spider-Man: No Way Home really does cast our hero out into the multiverse (thus giving him ‘no way home’), we could see the web-slinger experience alternate-reality versions of the events in Spider-Man: Homecoming and Spider-Man: Far From Home – which could be where the LEGO Group has drawn its inspiration from for the black-and-gold Spider-suit.

Given how averse Disney is to revealing major plot points through its merchandise, however, the more likely explanation is probably the simplest one: the LEGO Group just wanted to capitalise on the release of Spider-Man: No Way Home to push these three sets in front of Spidey fans under unified branding, while also taking a little creative license to bring us brand new minifigures.

We’ll find out for sure when Spider-Man: No Way Home lands in cinemas on December 17. You’ll be able to pick up all three new LEGO Spider-Man sets from October 1.