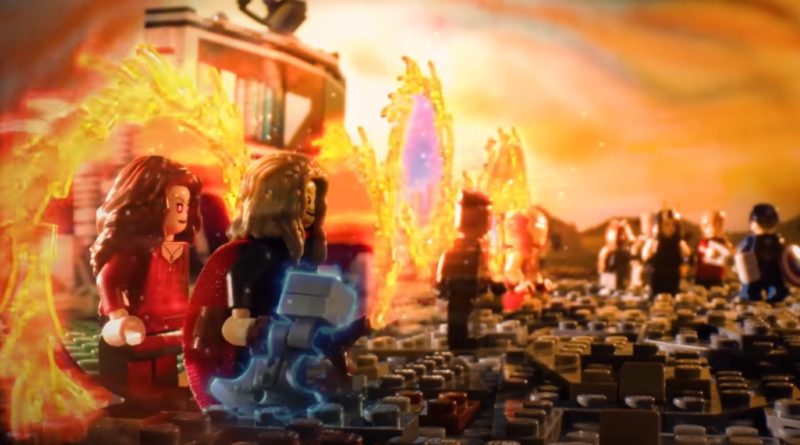 The recognisable portals scene from Marvel Studios’ Avengers: Endgame has been officially recreated thanks to the LEGO Group and Disney+.

The latest episode of What’s Up, Disney+ – a show themed to content on the streaming service, is dedicated to Marvel Studios’ The Infinity Saga and the wave of LEGO sets recreating the collection of movies from Iron Man to Avengers: Endgame. Hosts Jenny Lorenzo and Andre Meadows recreate the film in a new, but familiar way as part of the sponsored instalment.

As part of the final battle for the blockbuster movie, the vast heroes of the Marvel Cinematic Universe team up against a time-travelling Thanos and his army of beasts, soldiers and technologically advanced weaponry.

Whilst the episode is intended to promote the Marvel Cinematic Universe movies streaming on Disney+ as well as the relevant range of Infinity Saga LEGO sets, the video does include an official and authentic recreation of the portals scene from Avengers: Endgame, featuring the minifigures from 76186 Black Panther Dragon Flyer, 76190 Iron Man: Iron Monger Mayhem, 76192 Avengers: Endgame Final Battle, 76193 The Guardians’ Ship and 76189 Captain America and Hydra Face-Off.

The sequence is rebuilt using transparent flame pieces to represent the opening arcane gateways that transport the heroes to the battlefield whilst minifigure versions of the show’s hosts watch the action.

Whilst a build for the magical portals don’t appear in any of the LEGO Marvel Infinity Saga sets, the full range is available now on the official online with the bonus 76200 Bro Thor’s New Asgard having recently been released too.