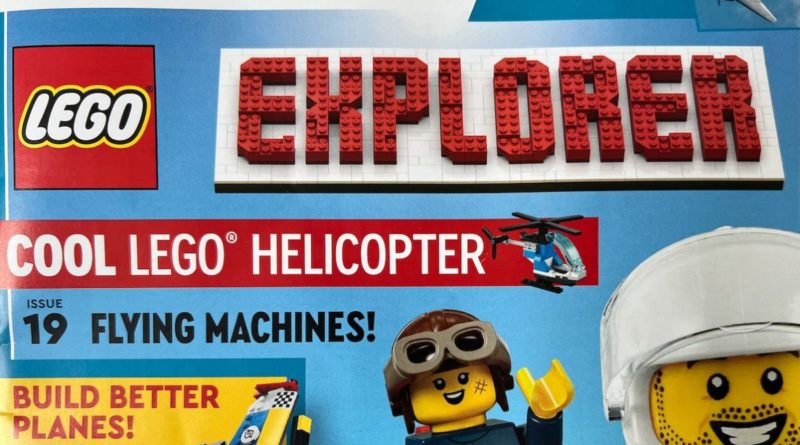 The latest issue of Story House Egmont’s LEGO Explorer magazine is out now in the UK and includes an additional bonus free gift.

LEGO Explorer magazine issue 19 is on sale now in the UK and features the usual mix of fact-based articles, comic strips, activities and building ideas. The latest issue is slightly more expensive than usual though at £5.99, due to the inclusion of not one but two free LEGO polybag gifts.

The previous issue stated that the cover gift for issue 19 would just be a LEGO Helicopter build. However, publisher Story House Egmont has instead opted to include a random additional polybag alongside that model for an extra £1. After visiting a number of local retailers, we discovered copies of LEGO Explorer magazine with a Fire Ant, Skull, Parrot and Moon Lander bonus builds.

Scanning a QR code on the front of the latest issue takes readers to the Story House Egmont site, which has building instructions for all of the above gifts as well as a Train, Plant Monster and Time Machine models.

The main LEGO Helicopter model is very easy to put together, with LEGO Senior Designer Nina Koopmann explaining how she created the build:

“I designed this gift during lockdown, which meant starting in a different way. I used a 3D programme first and then translated it into actual bricks,” she says. “That brought some interesting challenges that don’t normally happen – I ‘forgot’ about gravity and the first brick version was so tail-heavy that it always tipped over! So I had to start again and redesign it until the physical model was stable enough!”

LEGO Explorer magazine is published monthly and usually priced at £4.99 in the UK. Issue 20 is due on sale May 4 and will include an exclusive LEGO Robot polybag build.