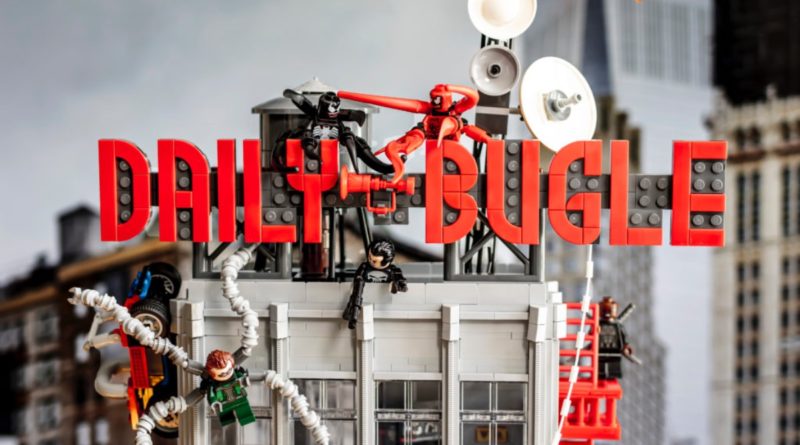 From a display piece that celebrates diversity to a product that seemingly defies physics, here’s Brick Fanatics’ top 10 LEGO sets that hit shelves in 2021.

We’ve already counted down our most disappointing sets of the year, but with all that doom and gloom out of the way, it’s time to turn to those 10 sets that sit head and shoulders above the rest in the 2021 portfolio.

These are the most accomplished, important or just plain impressive sets (or in one case, set of minifigures) to arrive across the past 12 months, and each and every one is worth your time and attention – even as we head into another new release window in 2022.

This list has been compiled with input from across the Brick Fanatics writing staff.

40156 Everyone is Awesome undoubtedly came as a surprise for many when it was announced as the LEGO Group’s first LGBTQIA+ set. Conceived by the company’s VP of Design Matthew Ashton, the set was originally a build displayed on his desk that colleagues would continually ask for a copy of. That prompted the LEGO Group to give the model a full, official release to the masses.

Although it may not be on sale in some regions, and has been reportedly banned in others where LGBTQIA+ rights are not recognised, the LEGO Group still demonstrates a commitment to diversity with the colourful build – which features every hue of the LGBTQIA+ flag, each with its own monochromatic minifigure.

The reception to 40516 Everyone is Awesome has obviously not been entirely awesome, but as a product, it’s just as important for leading that conversation as it is for reflecting the company’s brand values. (And it also helps that it looks great on display.)

Some of the best LEGO sets are ones with appeal beyond a theme’s narrow audience. 80107 Spring Lantern Festival was such a set. Despite its niche subject matter, its flexibility and sophisticated building techniques made it incredibly popular, and rightly so.

Park scenes have popped up in LEGO form before, but this one’s mix of organic shapes and exclusive prints immediately set it apart. The pagoda is particularly lovely, thanks to its rich colours and clever parts use. Elements like angled bamboo plants and printed fish tiles add to a sense of tranquility and connection with nature. The other printed banners and tiles also add intriguing cultural context, without limiting the set’s appeal too much.

However, the set’s best feature might be its compatibility with other LEGO sets. Its seamless connection with modular buildings allows us to add some visual interest to our streets, and at a cheaper price point than the buildings themselves. Given its particularly short shelf life, owners of this set are very lucky indeed.

71031 Marvel Studios highlights precisely what LEGO Marvel can be when given enough of a budget for its superhero minifigures (and yes, a complete set of 12 counts as a LEGO set for the purposes of this list).

While the world was stuck in lockdown for much of 2021, the arrival of multiple Disney+ superhero shows – from WandaVision to What If…? – saw viewers flock to their screens to catch up with the weekly antics, and much as it’s done in full force for The Mandalorian this year, it seemed inevitable that the LEGO Group would eventually turn its attentions to the small screen for Marvel.

The advent of 71031 Marvel Studios – which draws from all of the first four Disney+ shows, no less – reveals the potential that LEGO Marvel has always been able to reach, but can now finally achieve given a higher budget for its minifigures. Each and every one of the 12 new characters is imbued with immense detail, with the latest Captain America minifigure featuring printing on practically every possible surface.

Priced at £34.99 / $29.99 / €34.99, 76188 Batman Classic TV Series Batmobile delivers the goods with both its accurate depiction of the modified Lincoln Futura car and its choice of included minifigures. Adam West’s Batman and Cesar Romero’s Joker have dual-printed heads with great expressions and are very similar (but not quite the same) to those that come with 76052 Batman Classic TV Series Batcave.

But it’s the Batmobile itself that is the stand-out, with highlights of the vehicle being its TV show styling, subtle angles and detailed control panels, plus the classic red Bat-phone in the centre console. Anyone who’s a fan of the ‘60s Batman TV show will definitely want to add this set to their LEGO collection.

This year’s addition to the Modular Buildings Collection felt long overdue, because what’s a cityscape without a police station? Someone’s got to stop all those money launderers, cookie smugglers and – with the advent of 10278 Police Station – doughnut thieves. But what makes the 16th modular building so successful is how the LEGO Group has so brilliantly realised one of its CITY staples in the aesthetic of the wider street, delivering one of the best sets in the subtheme to date.

That’s not only by virtue of how big 10278 Police Station is – it’s taller than almost all its predecessors, while still reserving enough parts for a detailed interior – but also through how intelligently it uses colour, and how effectively it pulls together its central building with both a tiny, eight-wide doughnut shop and a newspaper stand.

What could easily have been a haphazard mash-up that swiftly loses focus is instead a cleverly-designed combination of building styles, cementing 10278 Police Station as another must-have entry in one of the LEGO Group’s best lines – and surely one of the best sets of 2021.

The LEGO Group has released some impressive robots over the years, but this one stands head and shoulders above many of them. An impressive remake of a 2015 model, 71738 Zane’s Titan Mech Battle is a pleasant surprise for 2021. It’s also an excellent choice for both NINJAGO fans and fans of giant robots elsewhere.

The set differentiates itself by offering knee articulation, which has been conspicuously absent from many LEGO mechs. This feature gives the mech a greater range of motion and allows for much better pose-ability than before. Its mix of whites, blues and golds is also appealing, evocative of early designs in the Exo-Force theme.

A number of fine details (like ankle-mounted jet boosters and onboard weapons storage) also enhance the appeal of 71738 Zane’s Titan Mech Battle. Throw in a pair of Ghost Warrior minifigures and an array of defensive systems, and this is one set you can’t afford to miss.

When the LEGO Group revealed the minifigure-heavy 76178 Daily Bugle in May, it was clear that the set was a real love letter to Spider-Man fans. The huge 3,772-piece skyscraper build stands 82cm tall, making it not only the largest LEGO Spider-Man and LEGO Marvel set released to date, but also only the second time it had appeared in LEGO form.

76178 Daily Bugle is packed with a wealth of nods, winks and references to classic Marvel and Spider-Man stories across its four floors. The set also completely nails the NYC vibe thanks to a yellow taxicab, ‘New York Sewer’ graphics, a souvenir stand and many other great touches.

Yet it’s the collection of minifigures included with 76178 Daily Bugle that are the real draw here – 25 of them in total. Even more exciting is that 16 of those minifigures are exclusives. From multiple Spider-Men (and one Spider-Ham), the Green Goblin and Doc Ock to The Punisher, Daredevil and Blade, the range of characters is truly staggering.

The first-ever Ultimate Collector Series AT-AT wasn’t always a sure thing: for years, designers and fans alike stated that it simply couldn’t be done, pointing to those pesky laws of physics for explanation. But this is 2021, life is short, and nothing is impossible. In walks 75313 AT-AT, an incredible feat of engineering that proves the doubters wrong.

Okay, it does so using a construction method that’s perhaps a little too difficult to dismantle, but that still shouldn’t detract from the achievement 75313 AT-AT represents. By giving the walker the budget it deserves – or more accurately, needs – to properly overshadow previous minifigure-scale versions, including 75288 AT-AT, the LEGO Group has delivered probably the most impressive LEGO Star Wars set of all time.

It comes at a very hefty price, obviously, but whether you need to sell off all your old AT-ATs, eat beans on toast for a month or otherwise prioritise it above all but two LEGO sets released this year (we’ll get to those), 75313 AT-AT is such a formidable beast that it’s absolutely worth it. (Okay, maybe don’t actually bankrupt yourself to buy it. A balanced diet is important too.)

21325 Medieval Blacksmith underwent a comprehensive redesign on the journey from concept to store shelves, with the final product only vaguely resembling LEGO Ideas fan designer Clemens Fiedler’s original submission. But while it’s a very different model to the one he pitched, it’s not worse: instead, it’s simply much closer to what you’d expect from an official LEGO set.

The bold mix of bright and rustic colours pops in the best way; the smart use of pentagonal tiles for the roof simplifies the design without losing any of its unique aesthetic; and the minifigures are a brilliant combination of references to classic LEGO Castle subthemes, including the Forestmen and the Black Falcons.

It’s a celebration of those themes in much the same way that 21322 Pirates of Barracuda Bay channels the original LEGO Pirates, and like that set, ultimately surpasses pretty much every one of its predecessors in practically every department. If you’re a fan of castles, the Middle Ages, blacksmiths or even just great LEGO sets, grab 21325 Medieval Blacksmith pronto.

2021 marks the 10th anniversary of LEGO NINJAGO, and the theme has subsequently received an extra dose of attention from the LEGO Group over the past 12 months, with many sets revisiting characters, locations and vehicles from across the past decade. And crowning it all is 71741 NINJAGO City Gardens, the biggest NINJAGO model to date.

Starting with 2017’s 70620 NINJAGO City, the multi-storey NINJAGO City models have quickly planted themselves among the LEGO Group’s most unique and celebrated models, with each of the three entries bringing something new to the line-up, which blends traditional and futuristic motifs with aplomb.

From an understated model in 70657 NINJAGO City Docks to a soaring skyscraper in 71741 NINJAGO City Gardens, the (hopefully ongoing) series is a testament to the theme and the creativity of the LEGO designers.

71741 NINJAGO City Gardens is filled with incredible techniques, bold and imaginative use of colour and inspired design moments – along with plenty of references to the show and other LEGO themes to discover during the build – and deservedly takes the top spot in Brick Fanatics’ 10 best sets of 2021. If there’s one set to grab from the year just gone, it’s this one.

Check out the rest of our Year in Review content – including our most disappointing sets of 2021 – by clicking here.

Consider supporting the work that Brick Fanatics does by picking up any or all of these fantastic sets through our affiliate links. Thank you! 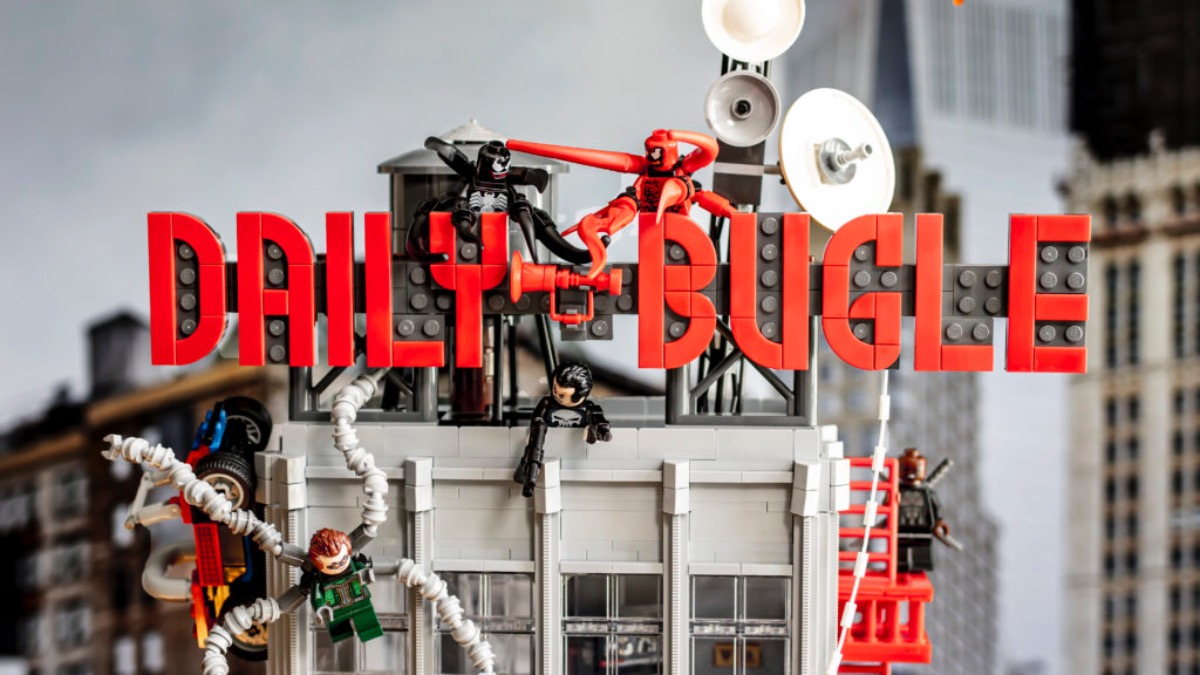