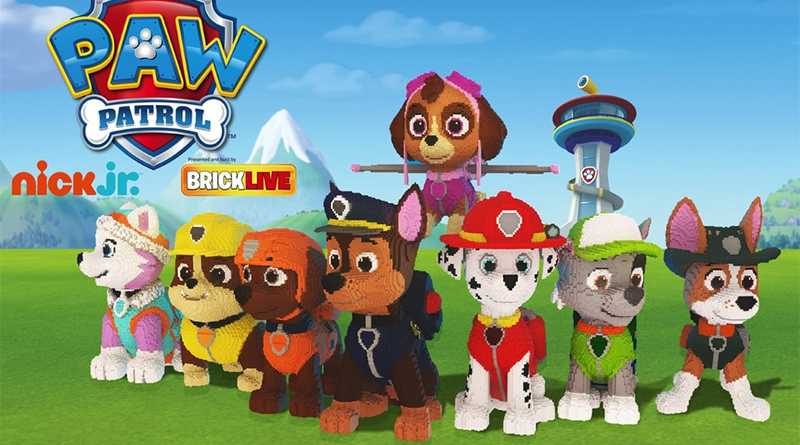 An announcement today reveals that the popular pre-school animated television series PAW Patrol will be coming to the touring BRICKLIVE unofficial LEGO events, thanks to a five year deal that the event organisers have signed with Nickelodeon. A broader Nick Jnr. theme will launch in the autumn, presumable bringing other popular characters to the shows, LTW reports.

BRICKLIVE shows in recent years have had themed exhibits around subjects such as animals, mythical beasts and dinosaurs – this will be the first licensed project. Given that Bright Bricks, owned by the same parent company, usually produces such exhibits, the professional building company will most likely be putting the PAW Patrol puppies together.

There will be 15 models featuring the series’ key characters, with each one using between 25,000 and 31,000 bricks. Alongside Chase and friends will be a two metre tall control tower made from 65,000 bricks and a fire engine photo op made up of 160,000 elements.

“BRICKLIVE is the perfect partner for creating a new way to celebrate our much loved characters,” said Virginia Monaghan, VP Marketing, Commercial and Events, Nickelodeon UK and Northern and Eastern Europe. “The scale of the models is so impressive – we can’t wait for PAW Patrol fans to meet the pups’ toy brick counterparts this summer and expanding upon our partnership in the future.”

“We are thrilled to have Nickelodeon, a leading player in the family entertainment sector, as our newest partner to deliver Nickelodeon branded BRICKLIVE events in the UK and Ireland. We very much look forward to developing the partnership and to develop new tour concepts, as we seek to continue to expand the BRICKLIVE brand,” said David Ciclitira, Executive Chairman of Live Company Group.