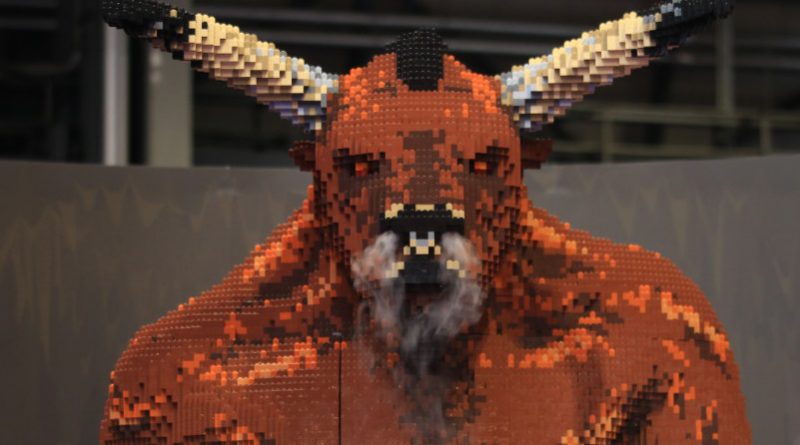 The NEC, Birmingham played host to the latest BRICKLIVE convention. Brick Fanatics was on the show floor to check out all of the LEGO activity taking place…

BRICKLIVE is a mainstay on the LEGO event calendar, with the big, expansive family shows occupying huge spaces. The latest Birmingham event returned to the NEC, using one of the convention’s massive exhibition halls to bring copious amounts of LEGO bricks to attendees. From November 1 to 4, guests turned up to indulge their love of LEGO.

As with previous years, brick pits offered vast quantities of LEGO bricks in specific colours to build with, while themed build zones included more bespoke pieces and encourages builders to construct a specific type of model – be it Star Wars, City or Architecture. Other returning attractions included the build map of Britain, Fairy Bricks mosaic making and WarriorBots.

The Bright Bricks themed area focused on Mythical Beasts. Impressive fantasy models wowed those entering the display area, including a minotaur and a chimera. Unfortunately, the interactive elements that had previously been included in the Bright Bricks area were missing.

Thankfully, there were more amazing builds on display, with a carefully curated AFOL zone focusing on scale. Almost all of the models on display were of a size that few are able to achieve at home, with models like Simon Pickard’s Galleons displaying ingenious use of LEGO bricks. Moving models always prove a delight too, with a giant Ferris wheel and rollercoaster best appreciated in person.

BRICKLIVE Birmingham 2018 marked the first public appearance for Brick Fanatics Magazine, with guests able to visit the booth and meet Editorial Director Rob Paton. Those who bought the magazine received a free LEGO Harry Potter poster and the opportunity to make and take a LEGO go-kart. It was such a popular promotion that the posters completely ran out, with plenty of attendees discovering the new magazine and leaving with reading material.

Variety could be found in the shopping area, where there was a good mix of retailers; visitors could choose between buying a personalised head for a minifigure, a piece of LEGO inspired art, a studded peak cap or a wine glass decorated for a specific minifigure. Macro LEGO Universe presented art prints for sale, with movie posters from across the Star Wars saga beautifully recreated in LEGO form.

Things livened up on the Sunday, when the LEGO MASTERS Series 2 contestants were surprise guests on the live stage. While making sure they did not reveal any spoilers for the series, they talked about their passion for LEGO building and increased the anticipation of the audience for the launch on Tuesday. What really came across during the interview is just how well the 16 builders get along, having formed firm friendships during the filming.

Other attractions at the event included a climbing wall, video game zones and a dance party.

Elsewhere in the NEC, Cake International 2018 was going on, and it would be poor reporting if it was not partially dictated by the promise of baked treats. While they were not necessarily the most impressive cakes in the extremely high standard competition, there were indeed LEGO themed treats to be admired.

Once again, BRICKLIVE offered plenty of bricks to build with and a selection of impressive models to check out. While innovation may not be what the event is known for, the consistency means attendees know what they will find there each year.