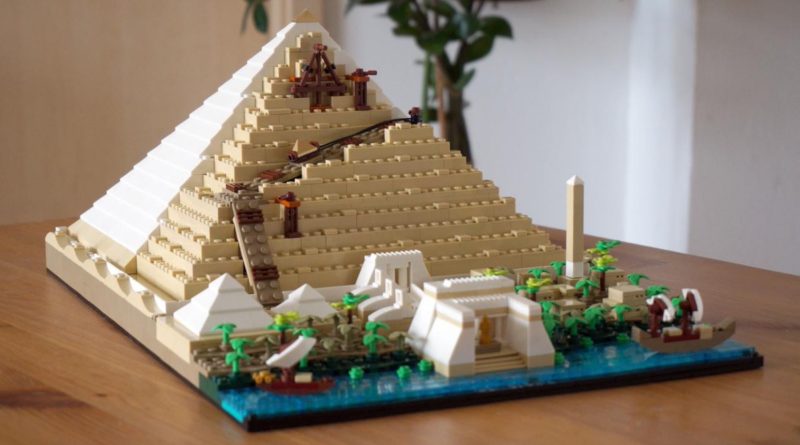 LEGO Architecture 21058 Great Pyramid of Giza only builds into half of its historic landmark as standard, but a little modification can get you a full pyramid with a single set.

Released at the beginning of June, 21058 Great Pyramid of Giza is this summer’s one and only Architecture set, recreating one of the Seven Wonders of the Ancient World in its heyday. Separate temples, statues, an obelisk and the River Nile sit in front of the pyramid, which means there’s only room on the base for half of the gleaming white structure.

That does leave the back open to one of the set’s most welcome surprises – a cross-section of the pyramid under construction – but means anyone looking to display a full recreation of the landmark will need to buy two copies. That’s no cheap prospect when just one copy of 21058 Great Pyramid of Giza rings in at £124.99 / $139.99 / €139.99, even with 1,476 pieces in the box.

And when you have copped a second copy, combining them isn’t as easy as simply building both sets to the instructions and sitting them back to back. Thanks to the slice of Egyptian life that sits in front of the pyramid, the process of creating a finished structure is a little more involved. (Though, it must be said, not quite as involved as building an actual pyramid.)

If you’re after a cheaper and more straightforward solution for displaying an entire pyramid, Rebrickable user peme has come up with an ingenious way of creating a full structure using just a single copy of 21058 Great Pyramid of Giza. All you need to do is decrease the height by a single brick, narrow the width by four bricks, and rearrange some of the pieces inside and around the base. Voila: a full pyramid.

There obviously aren’t enough white bricks in the box to cover an entire pyramid, so peme’s build makes use of the original set’s hidden interior to create the other half of the landmark. In doing so, it preserves the original intention and focus of 21058 Great Pyramid of Giza – but if you’d prefer a fully-covered pyramid, buying just the extra white bricks is still cheaper than picking up an entire second copy of the set.

The builder also notes that the pyramid as they’ve built it can be rotated easily, so you can display either the finished or under construction side of the structure above the workers’ village and Nile. They’ve even added a tiny compartment under one of the set’s smaller pyramids to store the leftover pieces, so you don’t need to worry about finding them again if you want to restore the original set.

You’ll find the instructions for this modification over at Rebrickable, where they’re available to download for free. 21058 Great Pyramid of Giza is currently sold out at LEGO.com in the UK and Europe, and it won’t launch in the US until August 1, but if you’ve been on the fence over buying a half-pyramid, this mod could be all the excuse you need to take the plunge when it’s available.