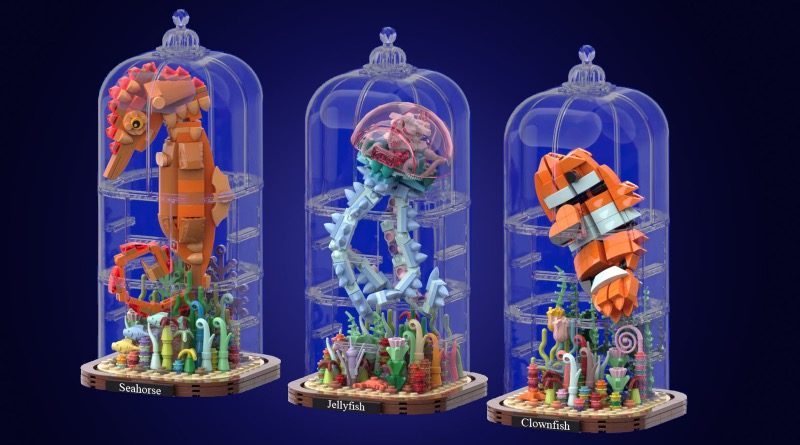 It’s better down where it’s wetter in the latest LEGO Ideas project to reach the review stage, which captures three examples of marine life in LEGO glass jars.

While the glass-like housings are reminiscent of 92177 Ship in a Bottle, their contents are definitely not anything you’d want to sail the seven seas aboard. Instead, the buildable clownfish, seahorse and jellyfish are happy swimming far below the surface, or in this case, trapped in display jars.

As well as the three sea creatures – which appear to be floating in the bell-shaped cases – each jar contains a slice of the seabed, complete with coral, and a display base with plaque. You can see this model going down well with science-minded fans, which the Ideas theme has happily catered to in abundance over the past few years.

Marine Life is the 31st project in the current Ideas review, which will run until May. At this point, nobody can reasonably deny that we’re on course to sail past the 35 projects that reached 10,000 votes in the second 2020 qualifying window, setting a new record for a single review.

Here’s the full list of Ideas projects up for consideration in this round:

Marine Life
A Map of Middle-earth
My LEGO Totoro
Jazz Quartet
The Trulli of Alberobello
The Polar Express
Train Bookends
The Nightmare Before Christmas
The King’s Castle
The Sewing Workshop
Forth Bridge
A Nice Day at the Farm
The Castle of Brickwood Forest
Baba Yaga
Claus Toys
Animal Crossing: New Horizons Paradise
NASA’s SLS & Artemis
LEGO bookends
Metroid: Samus Aran’s Gunship
Hyrule Castle (The Legend of Zelda)
The Karate Kid “Wax On, Wax Off”
Scania Next Generation S730
4½-Litre 1927-31 Bentley ‘Blower’
Asterix and Obelix
The Simpsons – The Krusty Burger
The House of Chocolate
The X-Files: I Want to Believe
Castle of Lord Afol and the Black Knights
Among Us: The Skeld Detailed Map
The Office
The Shire