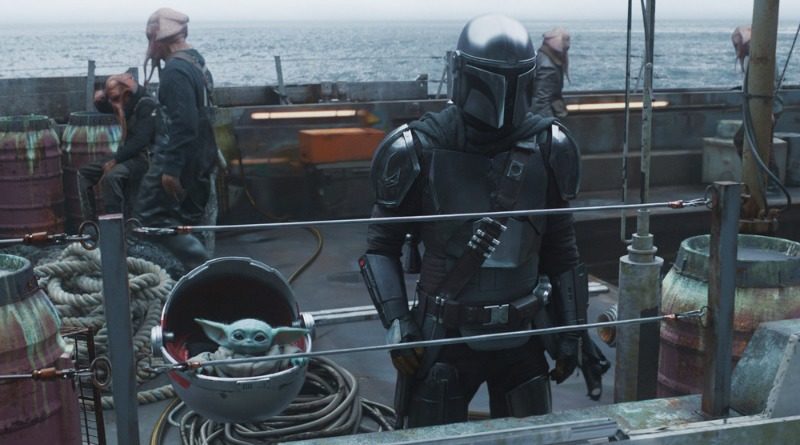 Brick Fanatics recaps Chapter 11 of Star Wars: The Mandalorian through a LEGO lens, chronicling the sets, builds and minifigures you’ll need to recreate the episode at home.

Much like Star Wars: The Last Jedi picked up immediately after Star Wars: The Force Awakens, this season of The Mandalorian has been one continuous story so far. The Heiress opens shortly after The Passenger closes, as Mando, Frog Lady and Baby Yoda reach their watery destination. (Cue our regular recommendation to pick up a copy of 75292 The Mandalorian Bounty Hunter Transport, and in this case, to modify it with last episode’s battle damage.)

Trask’s docks are populated by Star Wars’ seafaring species, including Mon Calamari and Quarren. We’ve had plenty of Mon Cal minifigures over the years, most recently in 75293 Resistance I-TS Transport, but you’re unfortunately out of luck when it comes to Quarren. And it really is a shame, given how big a role the squid-like beings play in this episode.

After Frog Lady reunites with Frog Man, they point Mando in the direction of yet another cantina. There, he meets a Quarren fisherman who apparently knows where to find the Mandalorians, just a few hours’ sail away. Our unlikely father-son duo hop aboard the freighter, renewed hope in their hearts. It won’t last. As it turns out, the Quarren don’t really know where to find Mandalorians. They just want Din’s Beskar armour.

So, they punt Baby Yoda’s bassinet into the gaping maw of a mamacore, which looks a bit like a sea sarlacc, only with more teeth. When Mando follows, they close a metal grate over his head, and try very hard to drown him. But wait: the Quarren did lead him to Mandalorians after all! More specifically, a very familiar Mandalorian jetpacks in to save the day, dispatching the Quarren and rescuing both Din and Baby Yoda. (Phew.)

That familiar face is the eponymous heiress Bo-Katan Kryze, who you might recognise from Star Wars: The Clone Wars and Star Wars: Rebels. She was a prominent player in both those animated shows, graduating from Death Watch cult member to leader of Mandalore, taking on Maul and the Empire along the way.

That makes her a pretty big deal, but Katee Sackhoff’s character has unfortunately never been released in LEGO form. Hopefully her presence in The Mandalorian will push the LEGO Group to rectify that soon. In the meantime, 75267 Mandalorian Battle Pack might at least help you with an approximation of her allies’ blue armour.

As has swiftly become the norm for Mando, Bo-Katan and her pals will only help him find the Jedi if he does them a favour first. (This is the way.) This is where things get a little spicier for LEGO fans, though, because the Mandalorians are planning to hijack a very familiar ship. The Gozanti-class cruiser was released in LEGO form as 75106 Imperial Assault Carrier back in 2015, and can still be had for around retail price on the aftermarket.

The rest of the episode takes place on board the cruiser, as our heroes battle to take control of the weapons the Empire has stolen from Mandalore. While you’ll need to recreate these stark hallways using your own bricks, you can populate them with official minifigures. Unfortunately, it’s a little tricky to do so using official sets: the only way to grab an Imperial Officer at the moment is by buying 75252 Imperial Star Destroyer. To say that’s an expensive way to stock up on minifigures would be something of an understatement.

Stormtroopers aren’t much easier to come by, either. There’s one in 75279 Star Wars Advent Calendar, which has sold out at LEGO.com. Three were available in 75262 Imperial Dropship – 20th Anniversary Edition, but that’s retired too. Fingers crossed 2021 brings us plenty of officers and soldiers to fill out our Imperial ranks.

The Heiress ends with Mando back on board the Razor Crest, which has now had something of a nautical makeover. Like The Passenger, then, our final recommendation for this episode involves modifying your own copy of 75292 The Mandalorian Bounty Hunter Transport, if you’re so inclined. A few LEGO starfish should do the trick.

Don’t forget to check out all the sets, minifigures and builds you need to assemble Chapter 9: The Marshal and Chapter 10: The Passenger.