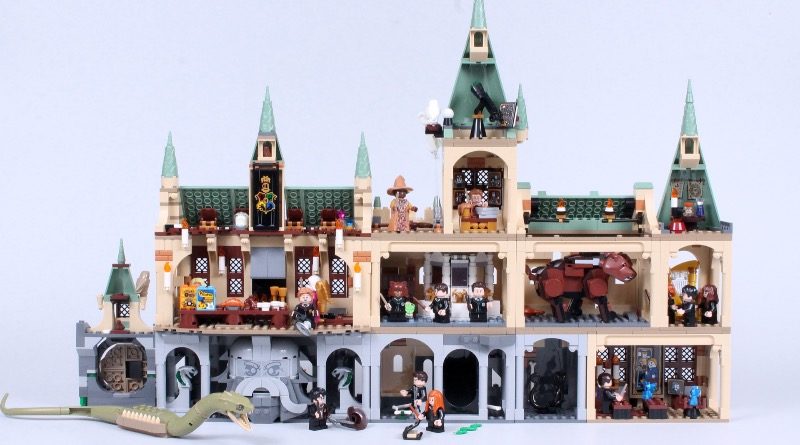 This year’s LEGO Harry Potter 20th anniversary Hogwarts sets are designed to connect together – but is it worth buying them all for the full display?

If you’re picking up any one of 76386 Hogwarts: Polyjuice Potion Mistake, 76387 Hogwarts: Fluffy Encounter and 76389 Hogwarts Chamber of Secrets on June 1 – or if you’ve just read our reviews – you’ll notice that each of those sets has Technic pin connection points, much like the modular buildings.

That’s nothing new for Harry Potter: 75953 Hogwarts Whomping Willow, 75954 Hogwarts Great Hall, 75948 Hogwarts Clock Tower and 75969 Hogwarts Astronomy Tower, all released between 2018 and 2020, are also all designed to connect together into one sprawling Hogwarts display.

The key difference in this year’s sets, though, is the flat, horizontal and otherwise boxy approach taken to the individual rooms of Hogwarts Castle, which allows the three models to be reconfigured not only alongside one another, but between each other, too – swapping out and stacking different sections of the wizarding school into whichever layout you like.

But while the possibilities are seemingly endless – and you’ll certainly enjoy playing around with different combinations if you do pick up all three sets – there are a few specific configurations that the models are clearly geared towards.

For instance, probably the main reason you’ll want to combine them is to actually make use of two major play features in 76386 Hogwarts: Polyjuice Potion Mistake and 76389 Hogwarts Chamber of Secrets. The former set hides the entrance to the chamber behind its central sink, while the latter includes a slide element to position below it.

Neither of those features are any use on their own, so the first thing you’ll want to do is swap out the Defence Against the Dark Arts (DADA) classroom in 76389 Hogwarts Chamber of Secrets for the second-floor girls’ bathroom in 76386 Hogwarts: Polyjuice Potion Mistake. They’re exactly the same dimensions, so it’s a very simple switch to make.

Given the minifigure count across those two sets – and the presence of Gilderoy Lockhart’s office in 76389 Hogwarts Chamber of Secrets – it’s fairly obvious why the girls’ bathroom was split, but as noted in our reviews of both sets, it does mean you’ll need to pick them both up to get the most out of them.

Thankfully, the result is so tidy and effective that you probably won’t mind doing so. And given the roofs of these sets are also removable, you can also simply stack the spare classroom atop the bathroom without needing to also pick up 76387 Hogwarts: Fluffy Encounter. But the DADA class is actually integral to making the most of that third set, so you might as well go the whole hog and buy it. You’re in too deep now.

76387 Hogwarts: Fluffy Encounter includes three more rooms: the third-floor corridor, complete with trapdoor; the Devil’s Snare that trapdoor should theoretically drop down to; and a vague, non-descript balcony. Within the confines of that set itself, you’re essentially left with two choices: a trapdoor that leads to nowhere, or a superfluous roof section.

That means you can only really make the most of it by combining it with 76389 Hogwarts Chamber of Secrets, using the spare classroom to prop up the third-floor corridor, and thus giving the trapdoor somewhere to go without wasting the roof section. But to have that spare classroom in the first place you’ll also need 76386 Hogwarts: Polyjuice Potion Mistake to replace it above the chamber entrance, so you’re back to buying all three sets.

All by design, we’re sure – but given the three sets combined works so well, we’re also not complaining. Together, they emerge into yet another sprawling Hogwarts layout, just like the one you’ve been building up for the past few years in the renewed Harry Potter theme.

But while those previous sets employed shrewd angles to give a sense of depth to the display, the boxy approach taken in the 20th anniversary range instead creates a much flatter – but far wider – layout. That’s good news for those of us with shallow shelves, but it’s perhaps not as dynamic as the alternative display offered by 75954 Hogwarts Great Hall, 75969 Hogwarts Astronomy Tower and so on.

Finally, there’s one more tiny niggle with the 20th anniversary sets as they come: the colours in 76387 Hogwarts: Fluffy Encounter suggest that the Devil’s Snare room should sit next to the Chamber of Secrets in the castle’s basement, but doing so means the third-floor corridor’s trapdoor instead opens on to the DADA classroom.

That can be easily fixed by swapping both those ground-floor rooms, but it creates the effect of the DADA class being situated in the basement from the other side. And speaking of the exterior – that’s where the boxy architecture of these sets can be felt most keenly, and not necessarily in the best way. Thankfully, the interior is interesting enough that you’ll probably want it that way round on your shelf anyway.

At the moment, then, there’s perhaps no ideal way to display the 20th anniversary Hogwarts sets. But because 76386 Hogwarts: Polyjuice Potion Mistake, 76387 Hogwarts: Fluffy Encounter and 76389 Hogwarts Chamber of Secrets all adhere to strict dimensions across each of their rooms, you can really just play around with them at will until you find a layout you like.

The only area that might take a little disassembly is the new Great Hall, because part of its floor is affixed to the Chamber of Secrets below. At 24 studs wide, the hall could easily be swapped with both a 16-wide section (such as the DADA classroom) and an eight-wide section (such as Lockhart’s office), but you’ll need to do some rebuilding to transplant the Great Hall’s floor.

We’ve showcased just a few of the possible layouts across these photos, but there are obviously plenty more you’ll be able to try out once you get your hands on the 20th anniversary sets. Thankfully, that day isn’t too far away, as the entire range of new LEGO Harry Potter sets – bar that rumoured direct-to-consumer set – is due to launch on June 1.

In the meantime, check out our guide to their randomised Collectible Wizard Cards, and click through below for our reviews of four of the brand new sets: