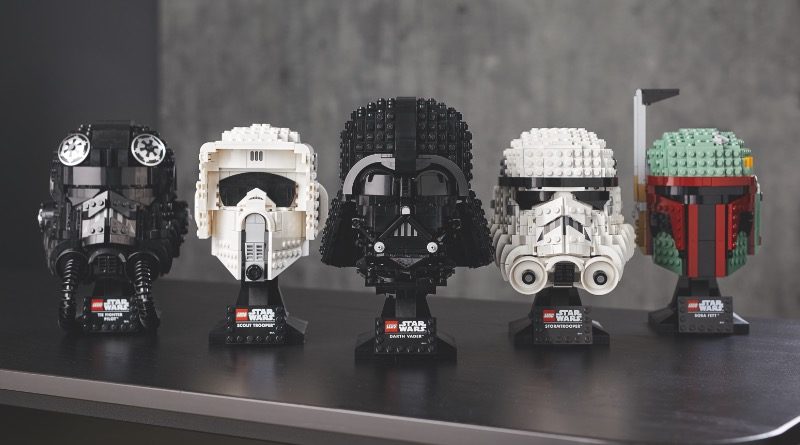 The LEGO Star Wars Helmet Collection is bringing together some of the most iconic armour in the galaxy, but with a wide variety of designs from Sith Lord to Stormtrooper, how do they compare?

LEGO Star Wars has positioned itself as one of the most popular and recognisable themes in the LEGO Group’s catalogue, and starting in 2020, a new range of collectable helmets was introduced with characters such as Darth Vader, Boba Fett and the hard-working soldiers of the Empire.

Every set in the LEGO Star Wars Helmet Collection sets itself apart from the rest, and while some may share similarities, the LEGO designers have introduced elements that ensure a unique design when on display. We’ve already compiled a list of every model in the collection, so the next logical step is to compare them.

Starting with the 2020 range of LEGO helmets, three models kickstarted the multi-theme collection, 75274 TIE Fighter Pilot Helmet, 75276 Stormtrooper Helmet and 75277 Boba Fett Helmet. All are currently available, but two are expected to retire by the end of the year.

In terms of structure, both 75274 TIE Fighter Pilot Helmet and 75276 Stormtrooper Helmet are similar but the former sets itself apart with added empire emblems and oxygen apparatus, as well as a striking black design. The latter meanwhile retains the look of the headgear as it appeared in the films, with a design that’s become a permanent part of pop culture, though makes itself distinctly LEGO with curved bricks mixed with a tiled dome on top.

75277 Boba Fett is arguably one of the more unique entries in the LEGO Star Wars Helmet Collection with it being the only one based on a character not fully affiliated with the Empire, not to mention the green and brown bricks that add a splash of colour to an otherwise monochrome collection. With a design based on the iconic Bounty Hunter and made even more popular by The Mandalorian, this helmet was always a recipe for success for the LEGO Group.

This year, the LEGO Star Wars Helmet Collection is being expanded with two more models, both of which will be available on April 26. 75304 Darth Vader Helmet presents the Sith lord’s classic headgear with the menacing mask accurately captured with the use of angled bricks and precise piece placement. Compared to other sets in the collection, none manage to capture the likeness of their characters quite as well as 75304 Darth Vader Helmet.

Wrapping up the selection, for now, is 75305 Scout Trooper Helmet, the cheapest of all the LEGO helmets so far. With a size that’s still comparable to others in the LEGO Star Wars Helmet Collection but at a more affordable price, the set is looking like a potential gateway into the world of LEGO helmets, if you haven’t jumped in already. The build uses some clever techniques and still maintains the likeness of the Endor enemies as well as the motocross helmets they are almost certainly based on.

It seems that any of the entries in the LEGO Star Wars Helmet Collection so far are a decent place to jump in, and while others represent more iconic characters than others, each one has enough detail worked in to make them feel unique and a worthwhile member of the range, and your displays. Be sure to check out our other LEGO helmet content, including a guide on getting the sets for yourself.