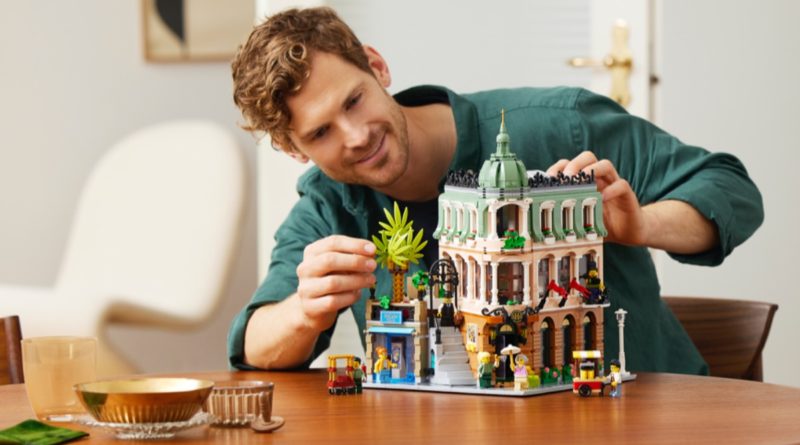 The LEGO Group has implemented its promised price increases in the UK, so here’s a complete round-up of all 141 sets affected.

Coming as a result of ‘increased raw material and operating costs’, these price hikes follow similar increases in the US and Asia-Pacific region at the beginning of August. They’ve affected sets from across a wide variety of themes, from Star Wars and Harry Potter to LEGO ICONS and Technic, with the most severe increases targeted squarely at sets intended for adults.

It means your money now won’t quite go as far as it once did at LEGO.com, which could see some shuffling around of the shopping list ahead of the holiday season. Dive into the full list of UK price increases below, and click here for a summary of everything you need to know about why these rises are happening – along with a full list of US price increases.

With LEGO Batman / LEGO DC seemingly on its last legs, only one of its remaining sets has increased in price – but it’s a biggie in 76240 Batmobile Tumbler. That 15% jump will sting for anyone who’s yet to whip out the Bat-credit card for this Dark Knight vehicle…

Nine LEGO CITY sets have seen price hikes for September, but none of them are especially egregious. Given most of the increases are focused on sets designed for adults – who are presumably better positioned to bear the brunt of them – that’s not too surprising.

Two smaller LEGO Classic sets have been hit by a 20% price increase, but that still only amounts to £5 each. In the grand scheme of things, it could have been worse – at least there are still a few relatively cheap ways to amass basic bricks.

Brace yourself: LEGO ICONS (formerly LEGO Creator Expert) is where your wallet is really going to feel the worst of these price increases, at least if you’re hoping to catch ‘em all. A total of 18 sets have jumped in price (some by as much as £40), including 10294 Titanic and 10297 Boutique Hotel.

40478 Mini Disney Castle now matches the newly-released 40521 Mini Disney The Haunted Mansion’s RRP, with one of the smallest price increases across the entire list in pound sterling. It’s a pretty massive increase for 43196 Belle and the Beast’s Castle, though.

Three older series of Extra DOTS have inexplicably increased by 50p each in the UK (no such price rises for Europe), while more recent series have remained consistent at £3.49 each. One of those more expensive series is already sold out, too, so we’re not sure what’s going on there.

Shopping for the younger LEGO fan in your life? Your cash will now buy a little less across much of the LEGO DUPLO range, with 10 different sets increasing in price by either £5 or £10 each. That includes Disney, Lightyear and Spider-Man DUPLO sets, alongside more generic models.

Surprisingly, only four LEGO Friends sets have been affected by this round of price increases, but among them is the theme’s biggest to date in 41704 Main Street Building. Still, it’s a relatively minor bump compared to other themes.

If you’re just diving into the Wizarding World and hoping to catch up on the previous three direct-to-consumer sets (before 76405 Hogwarts Express Collectors’ Edition), you’ll now need to spend an extra £120 combined. That’s pretty painful, and takes 71043 Hogwarts Castle alone in touching distance of the new train.

Some of the most significant price increases in this list can be seen across LEGO Ideas, from veterans like 21318 Tree House and 21323 Grand Piano to relatively recent arrivals such as 21330 Home Alone and 21332 The Globe.

These LEGO Jurassic World price increases seem pretty minor by comparison – but then the dino-tastic sets are already pretty expensive, by virtue of their giant plastic animals. It’s only a collective £30 bump on the entire wave, though…

If you’re yet to pick up LEGO Marvel’s biggest and arguably best set in 76178 Daily Bugle, this is one headline you probably won’t want to read: it’s just shot up in price by £35. It’s a hefty increase for the minifigure-laden set, which just 24 hours ago could be had for £265.

Two LEGO Minecraft sets have been dragged into the current round of price increases, both with a bump of £5. That’s more egregious for 21181 The Rabbit Ranch, given it represents a 20% hike on its original RRP.

Remember when 80036 City of Lanterns seemed like such good value in the UK? Well, the LEGO Monkie Kid set still is, really – it’s only gone up by a measly 4%. Phew. 80039 The Heavenly Realms has experienced the worst price increase here, but it’s not staggering.

Like 76178 Daily Bugle, NINJAGO’s biggest set – 71741 NINJAGO City Gardens – has jumped in price by £35. It’s a bitter pill to swallow for anyone yet to pick up the towering ode to 10 years of NINJAGO, alongside a wide range of smaller increases across the in-house theme.

All five of this year’s first wave of LEGO Speed Champions sets have raced up to match the newly-released DB5 and Dodge Charger in price, with single cars now retailing for £20 and double-packs jumping to £40 each. It’s still one of the best-value themes around, though.

Twenty LEGO Star Wars sets will now cause your wallet even more pain than they did a day ago, including the theme’s most expensive sets of all time in 75313 AT-AT and 75192 Millennium Falcon. In fact, the entire UCS range has been hit pretty badly, with even the recent 75341 Luke Skywalker’s Landspeeder climbing by £35.

LEGO Super Mario hasn’t escaped this round of price increases, with both of its first two direct-to-consumer sets hit pretty badly. 71411 The Mighty Bowser at least hasn’t risen any further, but then looking at these prices suggests its RRP already has a planned increase built in.

If you bagged the newly-released 42143 Ferrari Daytona SP3 when it first launched in June, you can give yourself a pat on the back: you’ve just avoided paying an extra £40. The rest of us will have to console ourselves with the Lamborghini Sián instead. Except that’s also gone up by £40. Rats.