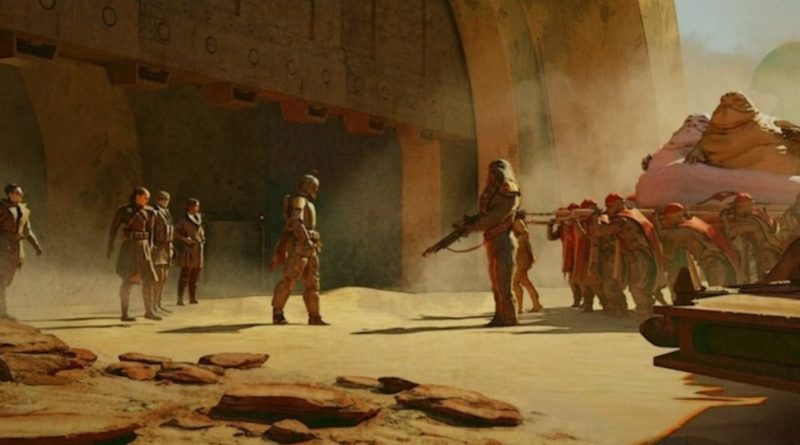 With episode three of Star Wars: The Book of Boba Fett now available on Disney+, new concept art has been revealed by Lucasfilm.

The latest episode of Star Wars: The Book of Boba Fett dropped on Disney+ last Wednesday, giving fans more thrills from a galaxy far, far away. Episode three featured a brutal fight between Wookiee bounty hunter Black Krrsantan and Boba Fett, a (fairly slow) speeder chase through the streets of Mos Espa and a new Rancor living beneath Jabba the Hutt’s former palace.

As with the first two episodes of the show, Lucasfilm has revealed a selection of incredible concept art created for the show for fans to salivate over. The amazing artwork depicts key moments from the episode, with images revealing characters, locations and creatures from the latest live-action Star Wars TV show.

In addition to the episode highlights mentioned above, the concept art also shows Boba Fett meeting up with the Pykes, an alien species that deals in illegal spice-running and who are shaping up to potentially be the show’s main antagonists. We should find out more about this untrustworthy race soon, as the finale of episode three revealed the crime syndicate arriving in full force at Mos Espa on board a huge starliner.

Star Wars: The Book of Boba Fett is available to stream now, with episode four of the series due to drop on Wednesday 16. For more information on rumoured upcoming LEGO Star Wars sets, head here.

One thought on “Concept art revealed for episode three of Star Wars: The Book of Boba Fett”