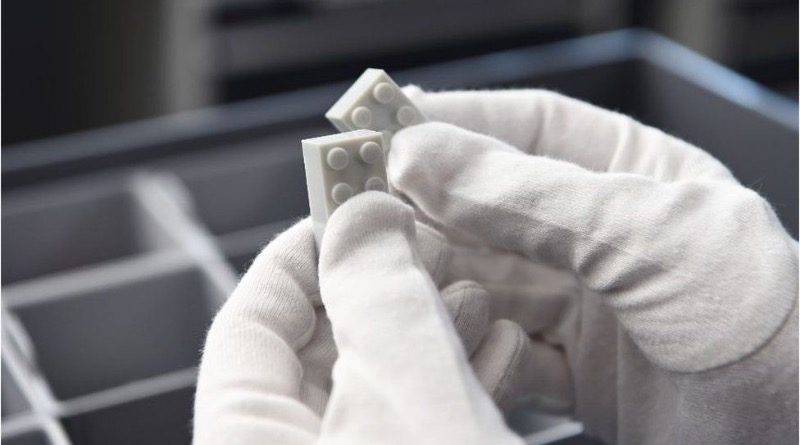 Announced earlier today, the LEGO Group’s first prototype sustainable brick is produced predominantly from single-use plastic bottles, along with what the company’s press release refers to as ‘strengthening additives’.

Brick Fanatics was able to chat with the LEGO Group’s Vice President of Materials Nelleke Van Der Puil ahead of today’s unveiling, and we asked about the challenges the sustainability team has experienced while spending the past three years developing the prototype element – and how and why those mysterious ‘additives’ factor into the equation.

“We add things to the plastic in order to make it suitable for the application, because if we used PET as is, it’s not going to work with a brick,” Nelleke explains. “It’s not clutching the way it should, so you don’t have that very nice click when you put them together.” A lack of friction isn’t the only clutch power issue the team has experienced, though.

“We’ve been working a lot with polyesters, and we know that the friction between the bricks is very high, so it’s very difficult to then take the bricks apart once you have assembled them,” Nelleke says. “It is [also] not very sturdy, so it is not safe if you don’t do the magic thing that we did to it.

“We’re also looking at the durability of the brick. We’re testing at different temperatures – at 50 degrees, for instance, we will look at: does it hold? And in some cases, it actually didn’t even if you have the additives there; it just doesn’t. It falls apart. So the clutch force goes down. And then there is also cleaning – you want to be able to clean the bricks, so we have to make absolutely sure that it looks glossy afterwards.”

The additives are therefore the LEGO Group’s chemical solution to bringing the quality of the PET plastic up to the standards the company requires of its elements. But bringing them into the mix also throws up its own problems, as Nelleke elaborates.

“If you do all these additives that we have, the impact is safety,” she tells Brick Fanatics. “If you put a weight on it, does it then fall apart, or does it break? In what way does it break? Does it break with sharp points, and you cannot use it? With PET it is a big challenge.

“We have to do all these iterations to get all the properties in the right range, and that is taking a very long time, because if you change one thing then the other thing might drop. So it is an optimisation across many parameters.”

To that end, we’re still potentially a couple of years away from seeing recycled LEGO bricks making their way into the hands of consumers, while the sustainability team completes further testing and development. You can find out more about the first prototype element by clicking here.