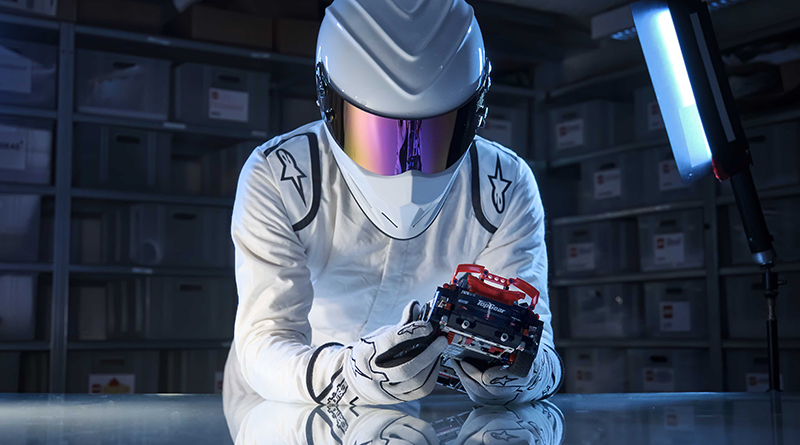 LEGO Technic 42109 App-Controlled Top Gear Rally Car launched last year as a rally car that can be controlled using an associated app. To celebrate the set, the LEGO Group has launched a fun video that sees the Stig infiltrating the LEGO House and playing with the drivable model.

Using 463 pieces, fans first build the rally car before getting to take it for a spin with the CONTROL+ app. The bespoke app provides real-time feedback, including a speed and tilt log, with racing challenges to complete.

The set was developed by LEGO Designer Samuel Tacchi, who has gone from working on the pull-back LEGO Technic cars to this functional, app driven vehicle. The LEGO Group has shared a Q&A with the designer, who reveals his early experience at the LEGO Group, why this set was the perfect project for him and the part that the Graphic Designer plays in the process.

What’s it like to be a designer at the LEGO Group?

I started working for the LEGO Group in 2016. I will always remember my first day, stepping into the office and looking at all the future products on the shelves. There were LEGO bricks everywhere that the designers use to help come up with new models. I felt like a kid in a candy store.

I love working as a LEGO Technic designer because it provides a different challenge every day. We try to recreate iconic vehicles on a small scale so designing the sets requires a good amount of problem solving as well as creativity. As designers, we are encouraged to spend the first few months at the LEGO Group just getting used to using the LEGO brick and building in different ways with it. It teaches you a huge amount about what is possible with the LEGO system of play.

Once I’d got used to the design basics, the first project I worked on was the LEGO Technic WHACK Racing Car following by the LEGO Technic BASH Racing Car, both of which had pull-back motors. It was great to have my first experience designing very small, but complex models. They taught me a huge amount!

I’ve been working at the LEGO Group for four years now and I’ve developed more than five models. Each new model I design is a step up in complexity from the last so I always look forward to my next challenge, and that’s the reason why I love my job so much.

How did the process start for the LEGO Technic 42109 App-controlled Top Gear Rally Car?

I’m a huge Top Gear fan so I was really excited to get going. We knew exactly what we wanted the car to look like from the beginning, which made it easy for me to jump straight into the design process.

As the LEGO Technic Top Gear Rally Car is app-controlled, our first task was to understand how we could use the technology to bring the car to life. I build a test car that used all the components in a very compact way so we could ensure the technology would power the car well. Once we had achieved this, we started to design the final shape of the car.

We presented the first design concept to the Top Gear team and everyone was excited, which was a good sign that we were on the right track. We then worked with the Top Gear team to make some refinements to the model to ensure it was the perfect Rally Car for the Stig!

What was your favourite part of the design process?

I enjoyed every minute of the design process. I am a huge Top Gear fan so it really was a dream to get to design a rally car for the Stig.

What was your inspiration for the model?

I am a petrol head! My head is full of information about cars, design, style, racing and performance and I look at new trends on a daily basis. For the LEGO Technic App-controlled Top Gear Rally Car I also spent a good amount of time looking at Rally Cross and the World Rally Championship and the cars that fans loved from these racing series!

Can you tell me how you worked with the graphic designer on the LEGO Technic App-controlled Top Gear Rally Car?

While I design the car and determine which LEGO elements to use, I work alongside a graphic designer to who starts to think about the details that makes the model come to life. The graphic designer thinks about how we can add cool features and details to the cars using stickers like you see on lots of real-life rally cars. Together, we researched current design trends in the rally car world to determine what kind of colours the car should be and what graphics we should use on the outside. The main focus was to make Top Gear Rally Car look as fast, adventurous and powerful, just like the sort of car the Stig would like to drive!

How did you choose the colours?

Picking the colours was quite difficult, because we had lots of different colour schemes in our heads that would have all been great. Of course we wanted the car to stand out to rally and Top Gear fans, but we looked across the LEGO Technic range to ensure we chose colours that made this model really unique. It wasn’t easy, but we’ve had really good feedback from fans on the colours so I’m sure we made the right decision!

What role did stickers play?

The stickers on the LEGO Technic App-controlled Top Gear Rally Car add an important layer to make the design feel really authentic. You rarely see a rally car without sponsors or race numbers so we needed some cool stickers for this model.

I designed the model without stickers at first to make sure we had the right shape before adding different colours or stickers. Once I knew we had a good shape, the stickers added the final touch to the car by adding an extra level of excitement to the model.

What is the coolest feature of the car?

I think the rear spoiler is the coolest feature of the LEGO Technic App-controlled Top Gear Rally Car. We used a wheel arch to build the big red spoiler which felt crazy when we were experimenting with it, but it really works and makes the spoiler different to others used in the LEGO Technic range!

How did you choose what sort of car to design for BBC Top Gear?

It’s a dream come true to design a LEGO model for one of my favourite TV series. I had the chance to meet the Top Gear team and work with them to design the sort of car we thought the Stig would be proud to drive. It was an amazing experience! And on top of that, I got to meet the Stig himself – how cool is that?

The Stig has obviously driven thousands of cars on Top Gear which made it tough to figure out what sort of model we wanted to create, but the Stig is adventurous and daring so we decided a rally car would be the best fit. Then we had to decide whether to make a replica of an existing car or design a completely new car specifically for this model.

At the LEGO Group, creativity is at the heart of everything we do, so it was natural that the rest of the team and I wanted to use our imaginations to create a totally new car rather than designing a replica. It meant we had more freedom in the design process, but at the same time it posed new challenges as we didn’t have a final shape or design in mind for the finished product.

How does the app work for the LEGO Technic App-controlled Top Gear Rally Car?

For this model it was really important that people could try out rally car stunts for themselves, and the app does exactly that. You can download the LEGO Technic CONTROL+ App from either the Apple App Store or Android Store and connect to the LEGO Technic App-controlled Top Gear Rally Car to really enhance the experience of the car. Once the model is built and the app is connected, you can to try out cool moves and maneuvers by controlling the car and making it drive forward, reverse, steer, accelerate, brake and tackle obstacles. The app also adds an additional layer to the rally car driving experience with authentic sound effects and data feedback.

Do you have any advice for people who aspire to become a LEGO designer?

If you are sitting out there dreaming about becoming a designer for the LEGO Group, my advice would be to keep on building! As designers, we have to be curious and creative every day so thinking outside the box, building, rebuilding and exploring what is possible with the brick is a great way to develop the sort of skills we appreciate at the LEGO Group.