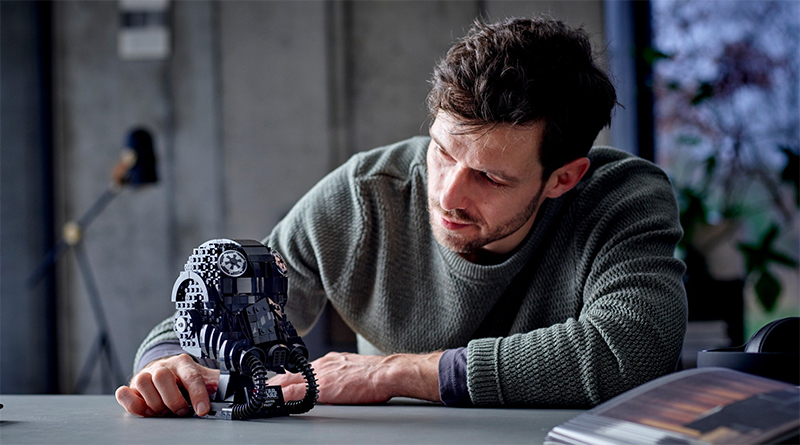 The designers behind the new LEGO Star Wars buildable helmet series discuss how they came up with this new concept and the challenges they faced designing 75276 Stormtrooper Helmet, 75277 Boba Fett Helmet and 75274 TIE Fighter Pilot Helmet

A new series of LEGO Star Wars sets has launched – buildable helmets. After trialling the concept in exclusive sets for Star Wars Celebration and San Diego Comic Con last year, three sets have been released in this all-new range.

Thank you to Jeremy Beckett for conducting this interview – he is the LEGO expert at Rebelscum.com, the go-to website for Star Wars collecting news and information.

How did the concept of the Buildable Model Helmets come about and were you involved in its creation?

César: Star Wars helmets are very iconic and have great display potential and so it was a natural concept that arose in some of our creative boosts and brainstorms. I was personally involved in the first sketch models of the Stormtrooper and TIE Fighter Pilot helmets and I ended up working on their final iteration.

How did you select which helmets would be the first three sets?

What do the helmets offer that is new for LEGO Star Wars and how does it appeal to the over 18 market?

Jens: The helmets are marked 18+ to signal that they are targeted mainly the adult audience. We wanted to communicate that with the new style of packaging, but also with the products themselves, which are meant for display more than play.

The building experience is also of high importance and by marking them 18+ it gave us less restrictions regarding building complexity. Without these restrictions, we can make far more detailed and accurate models.

How did you adapt the three Star Wars helmets to the format of the LEGO brick?

Niels: For me it’s a bit like sculpting in clay. You add a bit here and there, then remove some again. Try out different shape-elements and plates, to get that detail or contour you’re looking for. I also worked on the SDCC exclusive 77901 Sith Trooper Bust, which was a very similar task, and I must say I really enjoy working on these more organic sculpting projects. It is quite different from designing a spaceship – and yet again it’s the same.

Which was the most challenging aspect to work on?

Niels: For the Boba Fett Helmet it was probably the yellow stripes. We really wanted to achieve this detail brick-built, as using stickers or decorations in that area of the helmet would have been impossible. Once I figured out how to approach the challenge, it didn’t take that long, but it was probably the most challenging part of that design.

César: In the Stormtrooper helmet it was the eyes. They needed to be in the right shape but also angled across the sides of the face. In the TIE Fighter helmet the most challenging was the hoses. We really wanted to incorporate them in the model and so we used train wheels and flexible tubing to achieve the final result. But I would say that, in general, getting the correct shape and proportions of all the helmets was very hard because of their organic nature.

Did you experiment with any other scales for the models?

Jens:  We did discuss different scales for the helmets, but decided on this size, because they are big enough to get the shape and details right, and easy to display, as they do not take up too much space.

What is the difference between designing a ship like the Tantive IV and designing a helmet?

César: A set like the Tantive IV is primarily a playset, intended to be played and handled a lot. It also incorporates play features and minifigures so everybody can recreate some of the famous scenes from the movies. The helmets are pure display pieces that we all, hopefully, can display with pride. So they don’t have a lot playability and also no minifigures.

Which is your favourite helmet in the Star Wars galaxy?

Niels: I’ve always liked the helmet of Boushh. AT-AT Driver is also a personal favourite of mine and when it comes to Rebel helmets it’s probably the B-Wing and Y-Wing helmet. I just love their weathered look and many different painting styles and decorations.

César: The ones I worked on – Stormtrooper and TIE Fighter Pilot!