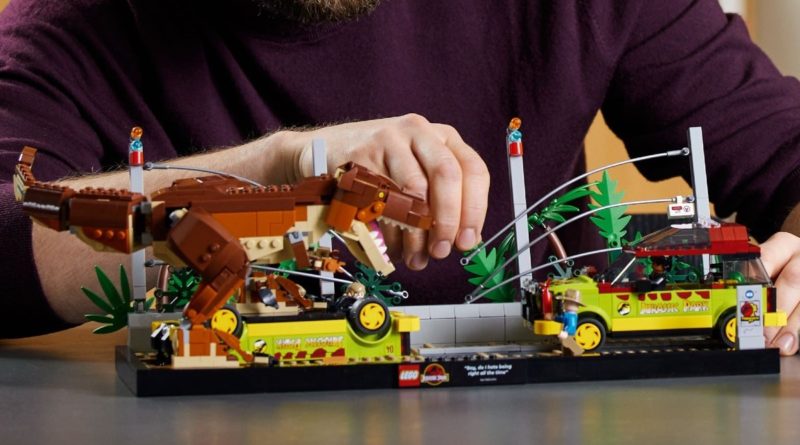 The LEGO Group’s line of Jurassic Park sets is about to expand with 76956 T. rex Breakout and we’ve found a few details you might have missed.

One of the most recognisable scenes in cinema is going to be recreated in the display-focused and 18+ 76956 T. rex Breakout when it launches on April 17, 2022.

To help pass the time before the launch of the latest wave of LEGO Jurassic World and the third Jurassic Park model, we’re taking a closer look at official images of the build to highlight a selection of film-accurate details.

However, these are not the same minifigures that previously featured in 75932 Jurassic Park Velociraptor Chase and 75936 Jurassic Park: T. rex Rampage as additional details such as water and mud have been added to reflect the context that the set is based on. It also means that owners of the original minifigures have exclusive variants, with more to collect from April.

76956 T. rex Breakout might look like it includes two Ford Explorers, but one of them is only half-built to mirror how one was crushed by the mighty T. rex in Jurassic Park.

The LEGO designers have only included the bottom half of one Ford Explorer in the upcoming LEGO Jurassic Park set, but don’t worry, you’ll still be getting a complete version of the vehicle.

Speaking of the completed vehicle, official images and the official online store’s description for the model have confirmed that the Ford Explorer build features interior details such as Buildable night-vision goggles, a flashlight and a CD-ROM touch-screen monitor.

Only the monitor can be seen in the currently released pictures, but the back of the Ford Explorer features at least one accessory as well as room for what looks to be four minifigures.

With Jurassic Park intended to be a tourist destination before plans went awry, it only makes sense that appropriate signage is included around the park advising guests to stay away from the electric fences and where to take the best photographs.

Taking this a step further, 76956 T. rex Breakout references the brick-built nature of the model with a claw-shaped hand on the electric fence sign, reminding us that this is a LEGO recreation of a scene from the Jurassic Park film and that you are in no danger of facing off against a T. rex.

One thought on “Four details you might have missed in LEGO Jurassic Park 76956 T. rex Breakout”