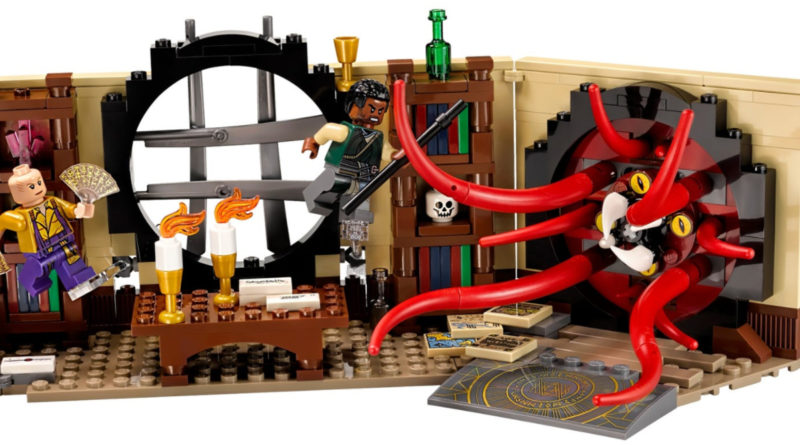 The most recent episode of Marvel’s What If…? may have been teased back in an older LEGO Doctor Strange Sanctum Sanctorum set.

The magical headquarters of the Marvel Cinematic Universe’s Sorcerer Supreme has only received two LEGO Marvel models since its debut in 2016. Most recently in 76108 Sanctum Sanctorum Showdown, but first in 76060 Doctor Strange’s Sanctum Sanctorum. This is as well as the upcoming 76185 Spider-Man at the Sanctum Workshop.

The debut model for the building featured three minifigures and a diorama including the central window of the sanctum. However, to the side, an arcane rune was creating a portal where strange red tentacles and eyes were protruding, attempting to grab the heroes.

This scene never featured in the movie, but a similar creature can be seen in one of the latest Marvel Cinematic Universe projects.

As part of Marvel’s latest episode of their animated What if…? series, an alternate version of the Sorcerer Supreme followed a darker path to the magical secrets of the universe by absorbing multiple mystical creatures. This eventually included a tentacled monstrosity emerging from a portal created by arcane runes.

Should that sound familiar it might be because a similar, and potentially same creature appeared years before in 76060 Doctor Strange’s Sanctum Sanctorum, as spotted by allKhanhas on Reddit. The user brings up the possibility that this creature was part of an earlier script that wasn’t used for the final film.

We may never know how the LEGO Group managed to tease an element of the animated episode years before it would be devised or whether or not this is just a coincidence. Either way, What if…? does have five dedicated minifigures as part of 71031 Marvel Studios.