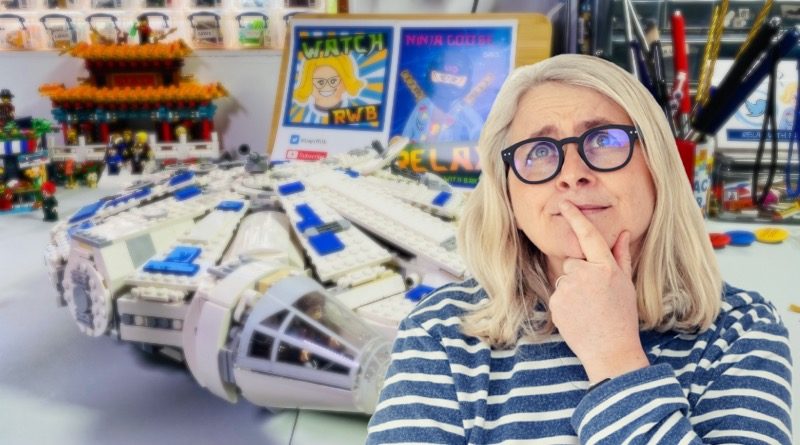 Author and screenwriter Emma Kennedy is proof positive that age – or even a childhood spent ignoring plastic bricks – is no obstacle when it comes to appreciating LEGO.

It seems almost impossible, but I didn’t play with LEGO when I was a child. Even more astonishing, I had a large sack of it: a great white cloth bag with the logo on the side. It had a drawstring and sat in a box in a corner of my room. Occasionally I might get it out and pretend I was a Swiss clockmaker, but that was it. For some reason, LEGO didn’t engage me at a young age.

I often wonder, now I am completely obsessed with it, whether it was the lack of order that put me off. I didn’t have a set to build with a start point and a definite end: it was just a heap of bricks and I wasn’t sure what to do with them. Whatever the reason, I’d give anything to have that baggy old sack back. It was my Bagpuss and I didn’t know it.

I came to LEGO very late in life – only three years ago, in fact. I was spending Christmas with my in-laws and my six-year-old nephew had been given a LEGO set for Christmas. It was a relatively small one in 75183 Darth Vader Transformation. He needed help to build it and because I was a Star Wars fan (I was 10 years old when Star Wars A New Hope came out, natch) I was more than happy to lend a hand.

What happened next was revelatory. My creative brain, which churns at 100 miles an hour, slowed down – and as I looked at the instructions and found the bricks and put the whole thing together and marvelled at the super clever moving part, I found myself entering a place of zen. I was overwhelmed with a feeling of complete calm.

When we returned home, I found my thoughts returning to that hour at the kitchen table with my nephew and how I had felt. I couldn’t shake it off. Could I buy myself some LEGO, I thought, but dismissed it because LEGO’s for kids, right, and that would be weird. And then, by chance, I saw a tweet from a friend of mine, another author. She’d just completed 10220 Volkswagen T1 Camper Van and had posted a picture of it. I stared at it and said, “Yes, please.”

It was a dangerous first purchase: the delicious interiors, the sliding seats, the boot, the curtains, the bright red set off against the crisp white. It was, in every sense, the gateway drug to becoming a full-blown adult fan of LEGO (or AFOL). I loved it, and found myself craving more. I thought, to hell with it, I’m going to get some Star Wars sets, and bought 75212 Kessel Run Millennium Falcon. I was drunk with brick-based joy, but it was another set that was to firmly establish my love for all things LEGO.

It was my birthday, and I came down to discover an enormous parcel sitting in the middle of the living room floor. I opened it and gasped. I’d heard rumours of the greatest set ever made*, a retired set, that was near impossible to find – but here it was, resplendent before me, waiting to be built. It was 75827 Firehouse Headquarters. I don’t think I’ve been happier.

I loved it so much I began filming short two-minute videos and posting them to Twitter. Thousands of people watched them. “I’d love it if you could film the whole build,” someone messaged me, and that was when Relax With Bricks began: real-time builds, one bag a day, savouring every last atom of a LEGO build.

I didn’t know there was such a thing as an AFOL, but I couldn’t be happier I’m part of that community now. I have lots of AFOLWACs (Adult Fans of LEGO Who Are Chums) over at Relax With Bricks and many of them, like me, have embraced LEGO late in life. I have one AFOLWAC, a grandmother in her 80s, who only recently got her first ever LEGO set. It’s wonderful. It’s never too late to have fun and you’re never too old to play. AFOLWACs forever.