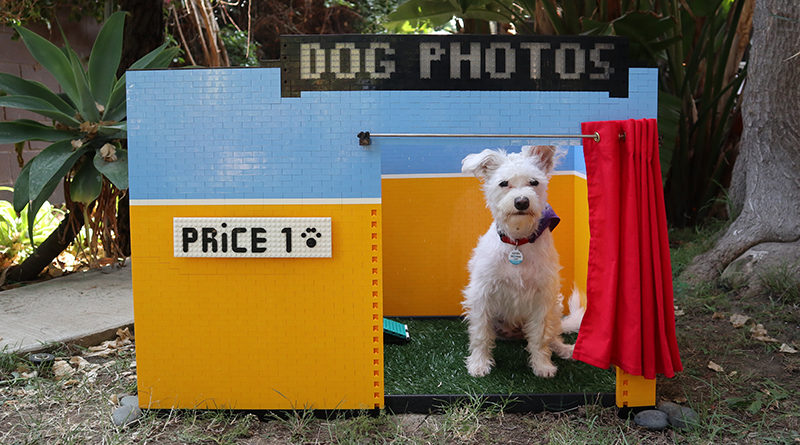 Inventor and robotics creator Simone Giertz has used LEGO MINDSTORMS to build a dog selfie booth, which is operated by the pooches themselves.

With LEGO MINDSTORMS 51515 Robot Inventor released yesterday, Simone Giertz has shown just what this amazing piece of kit can be used for – building a dog selfie booth! Sure, there are other things that could be built with the set, but who would want to do anything else?

It’s these kind of crazy ideas that Brick Fanatics wants to hear about. We are giving away three copies of LEGO MINDSTORMS 51515 Robot Inventor, the very same set that retails for £329.99. Just share your idea that’s even better than a dog selfie booth – all of the details are here.

Simone built the contraption for her canine buddy Scraps. The doggo just has to place a paw in the right spot to take a photo of herself and get a treat. According to the press release, the whole thing is “powered entirely by elements, motors and sensors from the new LEGO MINDSTORMS 51515 Robot Inventor set.

“’Build something cool with the LEGO MINDSTORMS Robot Inventor set’ is both one of the most fun and trickiest briefs I’ve ever received,” says Simone. “I turned to my three-legged dog and advisor Scraps. She’s always with me in the workshop, and my camera roll is pretty much exclusively photos of her. But I still want more dog photos, especially during 2020. So what if I cut out the middleman and found a way for her to take photos of herself instead? And that’s how I came up with the dog selfie booth.”

“Simone’s puppy-powered creation made us smile so much,” adds Lena Dixen, Head of Product and Marketing Development at the LEGO Group. “LEGO MINDSTORMS is designed to help young inventors raise their coding and building confidence and give them the tools to create anything they can imagine. By showing how creative you can be with the new LEGO MINDSTORMS Robot Inventor set, we aim to inspire kids to design and build their own models and inventions that can walk, think and do even more than ever before”.