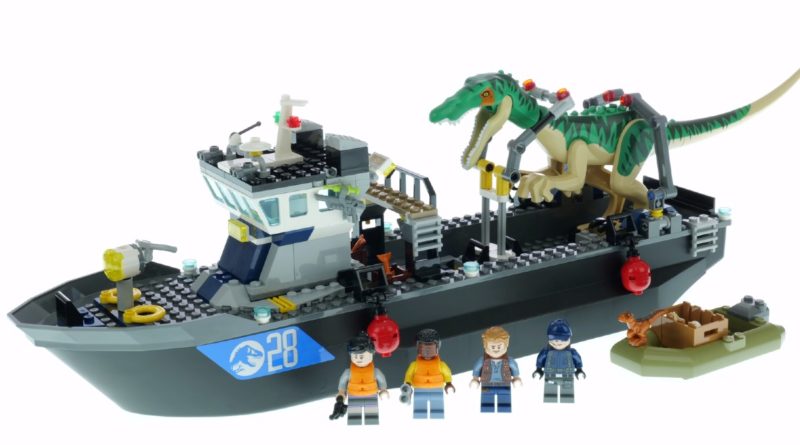 The largest LEGO Jurassic World set in 2021 has been reviewed, showing what to expect in the first model in theme with the big boat brick.

LEGO Jurassic World 76942 Baryonyx Dinosaur Boat Escape marks a notable moment in the theme as the initial appearance of a massive ship element alongside the already huge dinosaur pieces. Such a combination of bricks gives it one of the worst price-per-part ratios of any set in LEGO Jurassic World, but can this aquatic creation still impress?

Thanks to an early review from LEGO YouTuber AustrianBrickFan, a first look at the incoming build has arrived online shortly before its official release. That includes a showcase of the model itself, the new Baryonyx design and the four included minifigures.

“That’s really expensive for the piece count but I think it’s because of this boat piece and the dinosaur,” daid the YouTuber on the set’s high price compared to the number of bricks. “Those two pieces are raising the price, but I think it’s still a great set.”

The interior of the ship makes use of what little space is available, with a small area featuring what appears to be a flat bed, crates of fish to feed the dinosaur cargo, a small catwalk to monitor the creature and the bridge – which has enough room for one minifigure to sit. The other half of the ship is taken up by the holding area for the Baryonyx.

LEGO Jurassic World 76942 Baryonyx Dinosaur Boat Escape will launch soon, September 1, alongside the rest of the 2021 wave. You can get a first look at one of the other models – 76940 T. rex Dinosaur Fossil Exhibition – thanks to another early review. Stay tuned to Brick Fanatics and we’ll let you know as soon as the new sets go live on the official online store.