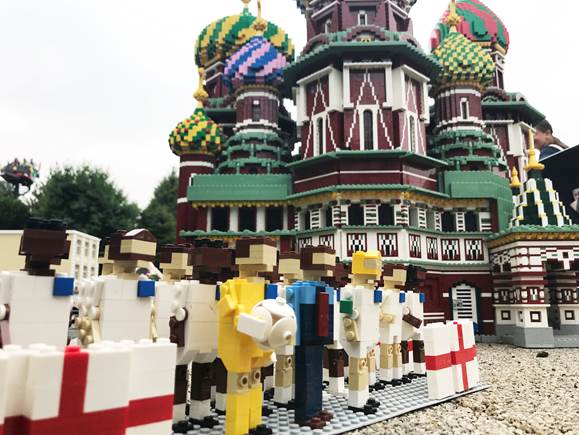 With England having reached the semi-final in the 2018 World Cup, the LEGOLAND Windsor Resort is celebrating by adding the team to Miniland.

The Model Makers at the LEGOLAND Windsor Resort have put together a mini version of the England 2018 football squad, in celebration of the team’s success in the FIFA World Cup 2018. 704 bricks were used to put together the tiny players, who can be found in Miniland outside St. Basil’s Cathedral.

Given the media attention he received, the squad would not be complete unless joined by manager Gareth Southgate. For added authenticity, the LEGO replica is wearing his trademark waistcoat. St. Basil’s Cathedral is one of the new landmarks added as part of the new Explore the World Miniland refresh.

“We felt it was only right to mark the efforts of this fantastic team,” said Lauren Moss, Senior PR Manager at the LEGOLAND Windsor Resort. “Our Model Makers had great fun creating the tiny scene, from the 23 LEGO brick England flags, to the tiny football made from just 6 bricks. We can’t wait to see our guest’s reaction to the new scene, which will be on display until the end of the summer.”

The team will be in place until the end of August. To book tickets to visit the LEGOLAND Windsor Resort, head to the venue’s official website.