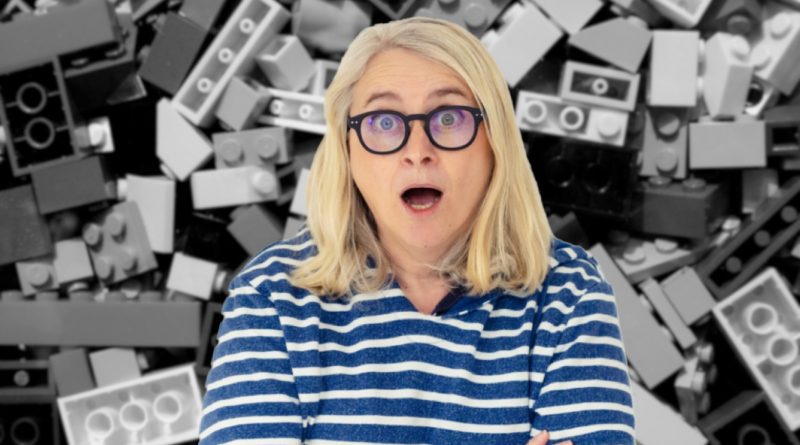 Author and screenwriter Emma Kennedy discovers that even individual LEGO bricks can fetch incredible sums of money on the aftermarket.

We’re always on the lookout for something new on Relax With Bricks – something we’ve never tried or seen before. Think the first time you tasted houmous or mango, or clapped your eyes on an avocado and didn’t have the first clue what to do with it. Chances are you’re all now completely familiar with those things, and so it is with bricks.

We’ve seen all the hinges we can handle; the tiles; the SNOTs (studs-not-on-top) – but every now and again, a piece crops up in a set that *drum roll* we have never seen before.

Luckily, I have an AFOLWAC (Adult Fans of LEGO Who Are Chums) on hand who deals with all this. He’s called Professor Lego, and whenever I think we’ve got a brick in hand that is totally new to RWB, I call on his services. This week he’s dealt with pods and a key from a Trolls: World Tour set, a clam shell and a claw from 71755 Temple of the Endless Sea, and I am waiting with bated breath for him to tell me about a connecting piece so new I’m not sure it’s even got a name yet.

This got me thinking about rare parts from sets in general. I’m currently making my own version of 10179 Millennium Falcon and I’ve been caught short by a couple of pieces that are so expensive, it’s hard to justify the purchase. When I first started the project over a year ago, I went online to try to find piece number 47996, a 3×28 rigging boat mast. I needed two for the back of the build. I didn’t get them. They were only available on eBay at £200 EACH.

Instead, I’ve improvised with some long gold firemen poles taken from a Batcave set. They look fabulous, and given I’m not making the Millennium Falcon, I’m making the Liza Minnellium Falcon, they’re perfectly in-keeping with the build. Now, thankfully, you can get the original rigging on BrickLink at a much-reduced cost (although I’m sticking with my gold poles).

I was slightly astonished to discover there’s a market for selling individual pieces at outrageous cost, but of course there is: this is LEGO we’re talking about, where the secondary market reigns supreme. With this in mind, if you have a large collection, it might be worth knowing which parts are hugely sought after, just in case you’re sitting on a small fortune.

It’s often said LEGO is more expensive than gold, and it turns out some LEGO bricks are more expensive than others. Take 70644 Metal Technic Hook Large. This was last seen in 2009. It’ll now set you back £10 new on BrickLink. Or 24201 Slope, Curved 2×1 Inverted. Common enough, you might think – but the teal variant was only available in 2018’s 41632 Homer Simpson & Krusty the Clown, and now ranges from £9-21 new, or nearly the cost of the entire set.

Or perhaps you’re after 2573 Giant Hard Plastic Wheel, last seen in 2007. The light grey version starts at £20 new, and you’re probably going to need more than one wheel for whatever you’re building. Want a 48×48 Baseplate in green? That’ll set you back £35. Then there’s the humble, minding-its-own-business brick number 3063. It’s a round 2×2 corner brick in sand green. Nothing special to look at, you might think, but it now costs £65 new.

Of course, all of these things pale into insignificance when it comes to rare minifigures. Cloud City Boba Fett from 2003 is now worth £1,300 new or £390 used; there’s a 2007 gold-plated C-3PO that starts at £870 sealed in its original bag, but the minifigure to beat them all is Mr. Gold. The LEGO Group released 5,000 Mr. Gold minifigures in its Collectible Minifigures range in 2013. If you were lucky enough to get one, congratulations. It’s now worth upwards of £3,500 sealed.

For many adult fans, LEGO is about nothing more than the build – but time will come when your space for new sets has run out. Unless you’re like the chap who bought another house to keep his collection in, you might want to think about reassessing yours and moving some of it on.

The beauty of LEGO is that it increases in value, and you never know – you might be sitting on small treasures, even among a simple pile of pieces. There’s gold in them there bricks.