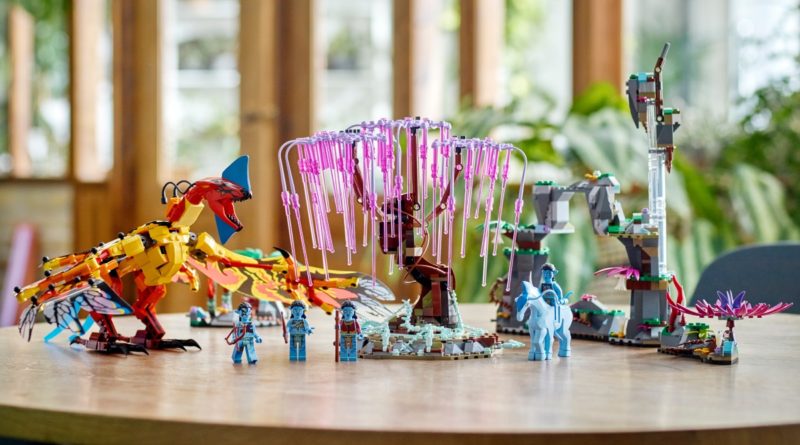 2023 is right around the corner and the list of confirmed and rumoured LEGO sets grows with everything from Avatar to Indiana Jones.

There are still a few months left in 2022 but rumours and news for the 2023 LEGO sets have already started to surface, hinting at what we might be able to expect in the year to come. Note that the rumours have not yet been confirmed by the LEGO Group and should be taken with caution. The listings from brickmerge have also not been announced as official so should be treated similarly.

Here’s your guide to every confirmed and rumoured LEGO set for 2023 as of August 2022.

Avatar is the newest theme under the LEGO Group’s belt with its first wave yet to launch at the time of writing. It’s reported via listings from brickmerge that we’ll be getting another range at the start of next year made up of four sets, coming just after the sequel arrives in cinemas.

We don’t know what these might be based on, though the sequel seems like a potential contender. Note that these listings have not been confirmed by the LEGO Group.

We’ve already had a pair of LEGO Minecraft BrickHeadz in 41612 Steve & Creeper but listings from brickmerge suggest that three more are coming next year.

The listed sets include one for Alex, a Llama and a Zombie, potentially adding a trio of BrickHeadz to the LEGO Minecraft range.

LEGO CITY’s line-up for 2023, at least according to brickmerge, will include a mix of familiar and new concepts for the theme include fire, police, Stuntz and more.

However, the most interesting item among the listings is 60388 Gaming Tournament Truck, offering something never seen before in LEGO bricks.

LEGO Classic is said to be receiving four new models in 2023, likely consisting of the usual boxes of bricks to build whatever you desire.

These are reported to revolve around colour palettes, parties and a simple but reliable big box of bricks.

The LEGO Group could have another in-house LEGO Collectible Minifigures Series ready to kickstart 2023 as listings from brickmerge might have revealed two future entries into the theme.

Coming in January, 71037 Series 24 is named in a way that indicates an original cast of characters rather than something licensed. There’s no name for the 71038 listing, though the price comparison site states it’s coming in May.

Brickmerge also has listings for seven new LEGO Creator sets that could be on the way in 2023. Only one has a name though and it’s the only model said to be released in January.

31133 White Rabbit is reported as costing €19.99 for 258 pieces and will likely be rebuildable into two other builds, following the 3-in-1 feature that LEGO Creator 3-in-1 is known for.

LEGO Disney is reported to have a few waves lined up for 2023 including five sets in January, two in March, two in April and one in May.

The usual mix of Cars and Disney Princesses are listed as inspirations for the reported 2023 sets though there are still five models without names.

After teaming up with Disney in 2022, the Wizarding World may be next for LEGO DOTS with three listings named simply ‘Harry Potter’. These are unconfirmed at the time of writing.

Head back to Heartlake City in 2023 as LEGO Friends will be back next year. A variety of listings suggest that the theme’s January 2023 wave will be made up of shops, animal rescue creations, a school and even bubble tea.

Prices range between €9.99 and €159.99 as Heartlake City could continue to expand next year.

The Triwizard Tournament is rumoured for LEGO Harry Potter in 2023 as a reported set list from Promobricks includes a potential guide on what to expect from the brick-built Wizarding World next year.

Following on from the Hogwarts Moments models, a range of house banners are reported for March 2023 covering all four Hogwarts houses.

According to listings at brickmerge, there will be at least four LEGO Ideas sets in 2022 and thanks to the nature of the program, we know what projects are up next for transformation into official sets.

You can find a list of every LEGO Ideas set currently in development by clicking here, but these are said to be the next four coming in 2023.

Promobricks reports that LEGO Indiana Jones will be back in 2023, likely timing with the release of the fifth film in the franchise but covering all of the adventures so far.

Be aware that these sets are only rumoured until officially announced as otherwise by the LEGO Group.

LEGO Marvel looks to have another packed year in store for 2023 as listings for several models have appeared on brickmerge, including a set for Morbius.

From Guardians of the Galaxy Vol. 3 to Ghost rider, here’s every listed LEGO Marvel set for 2023.

LEGO Minecraft’s 2023 offerings, other than a trio of BrickHeadz, are reported to include a swamp, bees, The End and more as listings for the theme include six models.

The EVO feature introduced in NINJAGO Core earlier in 2022 is said to be back in 2023 according to listings from brickmerge.

We’re still waiting for the second half of LEGO NINJAGO Crystalized but these reported sets suggest that the theme could receive another Core wave to kick off the year, as well as three other rumoured models.

Aside from that, four others are rumoured for a wave in March, including a Porsche 963.

LEGO Star Wars is listed as featuring plenty of sets throughout the first half of 2023 as we approach the next May the Fourth event, including some for The Mandalorian Season 3.

Only one LEGO Super Mario set for 2023 is listed on brickmerge, at least so far. 71415 is said to be launching in January 2023 for €24.99 but nothing more is known about this reported model at the time of writing.

It’s looking like another expensive year for LEGO Technic so far as brickmerge reports that January 2023 will be the release month for 42146 Liebherr LR 13000 at €449.99.

Also featured on the price comparison site are a variety of other listings including the first LEGO NASCAR model and another Bugatti creation. These have yet to be confirmed by the LEGO Group.