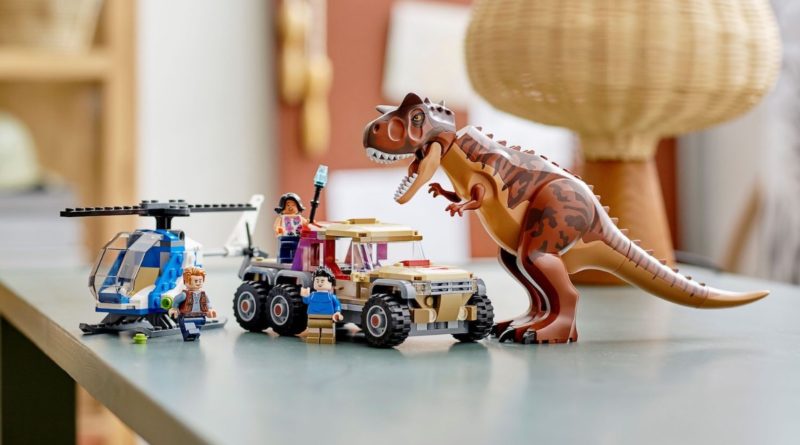 While September isn’t as heavy on new releases as August, there’s still no respite for our poor, beleaguered bank accounts, between the brand new line-up of Jurassic World sets, a complete series of Marvel minifigures to collect, and a late addition to this summer’s LEGO Star Wars: The Mandalorian range.

Happily, there are also plenty of offers to take advantage of while securing those new sets and minifigures, which takes some of the sting out of paying full price for them. Here’s a round-up of everything coming our way in LEGO this month, either already confirmed or only rumoured for now.

If you prefer your football in blue and garnet to red and white, and tinged with a hint of financial straits, make a beeline for 10284 Camp Nou – FC Barcelona. The LEGO Group’s second stadium (following last year’s 10272 Old Trafford – Manchester United) ups the price and piece count on its first, and is pretty poorly-timed for a club that’s just lost its talisman player.

But no matter: Camp Nou is still a stadium packed with history, and well worth the investment for any Barcelona fan. Plus, be among the first to buy and you’ll receive a pretty snazzy gift-with-purchase – see below for deets.

Available from September 1-12 (or while stocks last) at LEGO.com and in LEGO Stores with purchases of 10284 Camp Nou – FC Barcelona, this minifigure-heavy GWP immortalises a matchday ritual at the Font de Canaletes (Canaletas Fountain), where Barca fans gather to celebrate the team’s victories. It’s a fitting accompaniment to the bigger Barcelona set, and likely won’t be around for long.

The LEGO Group is trialling five new variants of existing sets, including 77940 Mighty Dinosaurs and 77942 Fiat 500, exclusively in the UK. Click here to check out all the details, or click through the links below to head straight to the sets at LEGO.com:

The latest LEGO Harry Potter direct-to-consumer exclusive offers something completely different for the Wizarding World theme, bringing Hedwig and a variety of magical objects to life in bricks. Check out our review of 76391 Hogwarts Icons Collectors’ Edition here before the set launches on September 2 (or September 15 in North America).

The Collectible Minifigures theme has finally embraced Marvel in this colourful line-up of 12 characters from the first four Disney+ MCU shows, including Loki, WandaVision, What If…? and The Falcon and the Winter Soldier. Check out our review for a closer look at 71031 Marvel Studios, which is now available everywhere except Australia, New Zealand, South Korea and Japan. (If you’re based in those regions, you’ll have to wait until October 1.)

Already caught up on all of August’s Star Wars: The Mandalorian sets, including 75311 Imperial Armored Marauder, 75312 Boba Fett’s Starship and 75315 Imperial Light Cruiser? Well, here’s another in 75319 The Armorer’s Mandalorian Forge, a set the LEGO Star Wars team originally wanted to design for the show’s first season. Available now for £27.99 / $29.99 / €29.99, this vignette set is well worth picking up.

Four new dino-themed sets are rampaging on to shelves in September, all based on Netflix’s animated series Camp Cretaceous. The dinosaurs across these Jurassic World sets are all familiar in species, but new in colour – or in 76940 T. rex Dinosaur Fossil Exhibition’s case, style, as the cheapest set of this wave takes its cues from 21320 Dinosaur Fossils in recreating a museum exhibit.

Click through the below links to check out all four new Jurassic World sets:

A record five different advent calendars have just launched at LEGO.com, and if history is anything to go by, they’ll probably all be gone long before December. Last year’s Star Wars calendar was particularly hard to come by, so if you’re after this year’s Mando-themed festivities, make sure to grab 75307 Star Wars Advent Calendar ASAP. Here’s links to all five:

There’s apparently plenty of stock of this year’s second LEGO Ideas gift-with-purchase to go around, as 40487 Sailboat Adventure will be returning from September 13-30. You’ll still need to spend £200 / $200 / €200 to grab it, though – a threshold that may explain why it hasn’t already sold out, like so many limited GWPs before it.

Another returning promo, 5006746 Swing Ship Ride will once again be available exclusively to VIP members spending at least £85 / $85 / €85 across everything at LEGO.com and in LEGO Stores. You’ll be able to snag the one-time Asia-exclusive between September 6-12, so no joy stacking it with 40487 Sailboat Adventure.

LEGO Make It Yours polybags

From September 20-30, any in-store purchase over $50 in the US will qualify for both 30563 Build your own Snail and 30564 Build your own Monster. There’s no word yet on whether the same offer will be coming to other territories, but two free polybags (in addition to 40487 Sailboat Adventure) would be very welcome.

The LEGO MASTERS’ Book of Secrets was available throughout August with LEGO Classic purchases of $60 or more, exclusively in the US. That same offer will continue into September, though there’s no word yet on whether it will be available in other regions.

If you’re not yet a member of the LEGO Group’s loyalty program, now is a great time to sign up, as the free blue VIP keychain is still available as an incentive for new customers. The LEGO VIP program is free to join, and you’ll earn points on every purchase to spend on future orders and exclusive rewards.

Rumours suggest a new LEGO for Adults set based on Netflix’s Queer Eye reboot will land on shelves in September, including 974 pieces and minifigures of the Fab Five – Antoni Porowski, Tan France, Karamo Brown, Bobby Berk and Jonathan Van Ness, who are all experts in areas like fashion, culture and food – for €99.99. Click here to learn more.

Tomáš Letenay’s ‘music to our ears’ contest entry will reportedly materialise as 21329 Black Stratocaster (that name may not be final) on September 21 for VIPs, presumably ahead of a wider launch on October 1. The latest rumours indicate a $100 price tag for the set, suggesting the LEGO Group has gone bigger on the guitar and amp than Letenay’s original 676-piece submission.