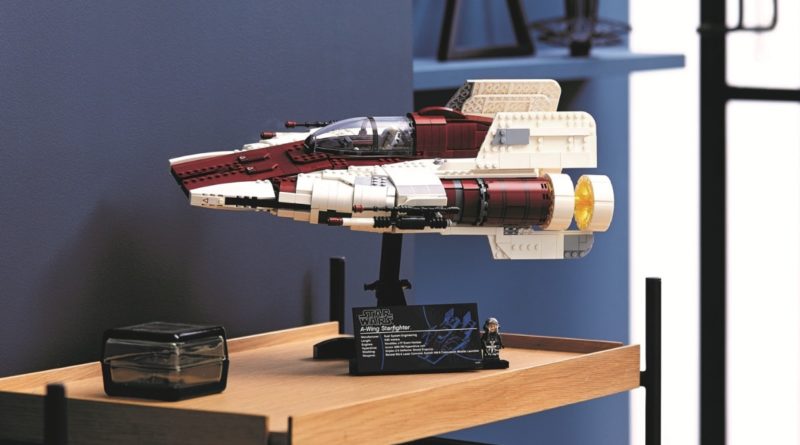 Here’s a full list of every LEGO set currently scheduled to retire by the end of 2021 – including a few that are likely to disappear at any moment.

Dozens of LEGO sets across themes including Star Wars, Creator Expert, Harry Potter, Ideas and more are all due to depart shelves by the end of the year, making way for new ranges and direct-to-consumer exclusives in 2022. Some of those have stuck around for several years now, while others are disappearing after only a short production run.

If you’ve been paying attention to Brick Fanatics’ updates this year, you’ll also notice that a few sets’ retirement dates have either moved forward or back in the past couple of months, so it’s worth browsing this list very carefully if you’re after a specific model. For instance, 21322 Pirates of Barracuda Bay is now due to retire by the end of 2021, rather than hanging around into 2022 as originally planned.

That’s demonstrative of how in flux these dates are, so they’re really all liable to change at a moment’s notice. For the time being, though, these are all the LEGO sets retiring in 2021 (by December, unless otherwise specified) according to Brick Fanatics’ sources.

We’re hoping to see at least some of these discounted for this year’s Black Friday and VIP Weekend shopping events, but there’s no guarantee that they’ll stick around that long – if they’ve already left production lines, as some of these surely will have, then once the current stock is depleted, it’s gone for good.

There are no real surprises for Star Wars, bar perhaps two of the Helmet Collection sets – 75274 TIE Fighter Pilot Helmet and 75276 Stormtrooper Helmet – apparently leaving shelves before 75277 Boba Fett Helmet, which launched at the same time as those other two Imperial buckets.

Otherwise, all of these sets arrived on shelves in 2020 or earlier, and are therefore coming to the end of the 18-month production run most sets enjoy. That said, direct-to-consumer sets are usually the exception to that rule – but not so for 75275 A-wing Starfighter, suggesting the original trilogy ship maybe hasn’t sold as well as anticipated. Here’s the full list:

Just three LEGO Ideas sets are due to retire by the end of December (though they could easily sell out before then!). Two of those were already on the list back in April, but 92176 NASA Apollo Saturn V and 21321 International Space Station have since been bumped to 2022.

Surprisingly taking their place in the last-chance saloon is 21322 Pirates of Barracuda Bay, which was originally scheduled to retire in 2022…

A suite of superhero sets are retiring in 2021, most of which launched in either 2019 or 2020. Probably the most interesting ones on this list are 76162 Black Widow’s Helicopter Chase, which is leaving shelves only six months after the heavily-delayed movie arrived in cinemas, and 76165 Iron Man Helmet, which is the first Marvel entry in the Helmet Collection.

The renewed Harry Potter theme has swung in a new direction for its 20th anniversary, with a soft reboot of the modular Hogwarts sets. That means the LEGO Group is finally starting to phase out its 2018-2020 range, with 75953 Hogwarts Whomping Willow about to follow the already-retired 75954 Hogwarts Great Hall out the door.

Two of this year’s buildable textbooks are also on the chopping block for 2021, though the other two will apparently persevere into 2022. If you want the complete collection, make a beeline for these two first.

Some real heavyweights of Technic and CONTROL+ are due to retire in 2021, including the enormous 42100 Liebherr R 9800 Excavator and the uber-cool 42083 Bugatti Chiron. If either of those sets are still on your wish list, grab them before they’re gone – they’re not likely to be any cheaper on the aftermarket.

Three vehicles, a train, a fairground ride, a Winter Village set and a modular building are all earmarked for retirement in 2021. Given most of these are part of long-running individual LEGO for Adults subthemes, they’re all likely to spike in price post-retirement, so could be worth picking up as investments if nothing else. Fingers crossed at least one sees a deep discount for Black Friday…

This year marks your last opportunity to bag a range of longstanding skylines and landmarks in the Architecture range, though others – including 2016’s 21028 New York City – have some life left in them yet. 21046 Empire State Building is a particularly brilliant example of the ingenuity involved in assembling these real-world staples of architecture, so don’t miss out.

Two NINJAGO sets were scheduled to retire in July 2021, but are still (just about) clinging on at LEGO.com. This is likely your very last chance to buy them, though, so don’t sit on 71710 Ninja Tuner Car or 71712 Empire Temple of Madness if you’ve been eyeing them up. Beyond those, last summer’s Skull Sorcerer sets are very much worth grabbing – whether you’re a NINJAGO fan or not.

Poor old Bats has been getting pretty short shrift from the LEGO Group in recent years, with only two currently-available DC sets surviving into 2022. The rest – listed below – are all due to leave shelves this year, so make sure to grab these pronto if you’re looking for a Bat-addition to your collection. 76139 1989 Batmobile is probably the one to aim for, ahead of its apparent succession by a UCS-style Tumbler later this year.

Like NINJAGO, a handful of Super Mario sets are still going beyond their planned July 2021 retirement date, though several are tagged as ‘retiring soon’ at LEGO.com. Both starter courses – including last year’s 71360 Adventures with Mario and the newly-released 71387 Adventures with Luigi – are planned to be on shelves until at least 2024, but several of both 2020’s and 2021’s expansions are disappearing already.

One Creator 3-in-1 set is just about clinging on to availability at LEGO.com, but 31089 Sunset Track Racer really isn’t long for this world now. Highlights departing by December include 31104 Monster Burger Truck, 31107 Space Rover Explorer and 31097 Townhouse Pet Shop & Café, which boast nine designs between them.

The first wave of eight-stud-wide Speed Champions cars will race off into the sunset by the end of 2021, presumably making way for whatever’s coming in 2022. Of these, 76895 Ferrari F8 Tributo is definitely worth your time, while 76898 Formula E Panasonic Jaguar Racing GEN2 car & Jaguar I-PACE eTROPHY has been spotted on deep discount at third-party retailers.

We’ve included 71044 Disney Train and Station on this list because its current exit date is December 2021, but it’s already sold out at LEGO.com in the UK. Your best bet now is finding it at a LEGO Store – should any still have stock. Beyond that, the most surprising additions to this list are the Raya and the Last Dragon sets, which only arrived on shelves a few months ago.

Dinosaurs come and go, but a LEGO T. rex the size of the one in 75936 Jurassic Park: T. rex Rampage probably won’t be seen again in our lifetimes. The enormous Jurassic set is on the way out this year, so make a beeline for the celebration of the original ’93 movie if you haven’t already.

The LEGO Group is beginning to wind down sales of Monkie Kid sets in LEGO Stores across the UK and Europe, which means future releases will only be available through LEGO.com outside Asia. Unsurprisingly, a swathe of Monkie Kid sets are therefore due to retire for good by the end of 2021, although flagship products like 80012 Monkey King Warrior Mech will persist into 2022.

The one and only Stranger Things set released so far – at least beyond a store promo and a San Diego Comic-Con-exclusive minifigure – will leave shelves by the end of the year. Given recent teases from the LEGO Group, that could well be to make way for another set to tie into the show’s fourth season, which will debut on Netflix in 2022.

CITY is one of the LEGO Group’s most prolific themes, so it’s no surprise to find that it also boasts one of the longest lists of retiring sets in 2021. A total of 41 sets are on the chopping block, including last year’s direct-to-consumer exclusive 60271 Main Square.

LEGO VIDIYO has already been shelved indefinitely, with the LEGO Group promising to bring something new to the table from its partnership with Universal Music Group in 2023. Its second wave of sets and BeatBoxes will still be available into 2022, however – albeit very likely on deep discount, given we’re already seeing half-price sales on the newly-released sets. The first batch will be gone by the end of 2021.

The LEGO Group is taking its original quartet of LEGO Art sets down from its walls by December, so if you’ve been contemplating picking up multiple copies to create their alternate (or combined) builds, this is basically your last chance. Fingers crossed at least one of these sees a decent sale around Black Friday.

From a jungle rescue and water park to a party boat and hospital, you’ll struggle to find more variety across a single theme than in LEGO Friends. All four of those mini-doll sets – and dozens more – will be retiring later this year, including a whole bunch of LEGO Friends Cubes, but we’re already looking forward to whatever replaces them. (And it could literally be anything.)

BrickHeadz has been back with a bang in 2020 and 2021, covering seasonal builds, licensed characters and even pets. Around half of those are on the way out this year, including a selection of the BrickHeadz Pets subtheme’s sets – although more still are sticking around into 2022. Similarly, one each of the two Minions and Harry Potter BrickHeadz that launched this year won’t survive on shelves beyond December.

Bracelets, bag tags and ‘Extra DOTS’ are all making way for presumably new DOTS products by 2022, should the accessory-driven theme persist into the new year. A handful of original 2020 releases are also finally leaving shelves, making this your last chance to pick up 41906 Pineapple Pencil Holder and 41907 Desk Organizer. Here’s the full list:

A handful of Minecraft sets are leaving shelves this year, but no matter: there are plenty more where those came from in what’s turned into an evergreen theme for the LEGO Group. Hard to believe it all started with a LEGO CUUSOO/Ideas set back in 2012, but here we are.

One thought on “Every LEGO set retiring in 2021 – August update”