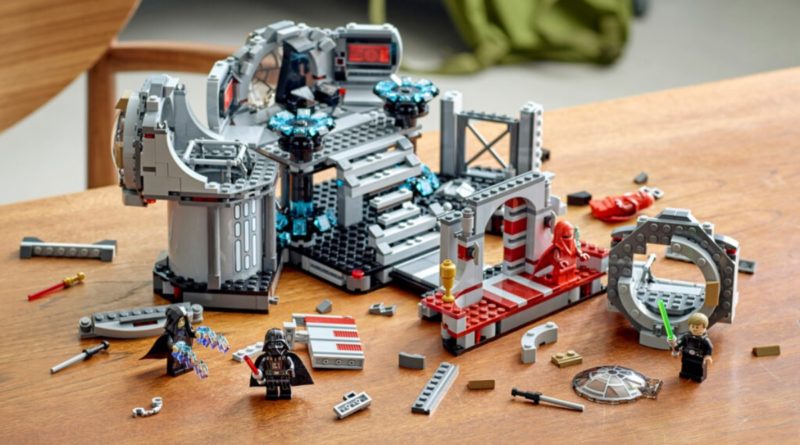 Rumours around next year’s LEGO sets are coming in thick and fast, so here’s a complete overview of everything said to be on the way in 2023.

Late summer into early autumn is traditionally peak LEGO rumour season, and this year is no different: we’ve already seen reports on what to expect from Star Wars, Harry Potter, Marvel, CITY and more in 2023, along with potential price points and piece counts. But with so much said to be arriving in the first half of next year, keeping track of everything isn’t easy.

The good news is that we’ve done all the hard work for you, so all you need to do is scroll down this list for a complete picture of every LEGO set currently confirmed and rumoured for 2023. Remember that unless explicitly stated, however, nothing here is guaranteed – and should therefore be taken with the customary pinch of salt until the LEGO Group officially unveils its 2023 line-up.

Just one LEGO Art set is currently said to be on the way in January, but it follows 31206 The Rolling Stones and 31207 Floral Art in breaking away from the theme’s conventional price point for a 48×48 mosaic. It could genuinely be anything at this stage: a framed two-dimensional piece, a relief ‘painting’, or something else altogether. Whatever it is, StoneWars reports it’ll include 1,810 pieces.

Next month’s initial four LEGO Avatar sets are rumoured to be joined by another four in January, two of which come in cheaper than the current entry-level 75571 Neytiri & Thanator vs. AMP Suit Quaritch. No confirmation yet, but it’s relatively safe to assume these sets will be based on upcoming sequel Avatar: The Way of Water (if they exist at all). The piece counts below are courtesy of StoneWars.

BrickHeadz looks to be continuing in a big way in 2023, with four sets possibly based on Disney characters and two more potentially inspired by the Star Wars universe. Those additions join three LEGO Minecraft BrickHeadz, which were first revealed through LEGO.com in April.

As is tradition, two LEGO Chinese New Year sets are said to be on the way in 2023. Where they’ve typically come in at around $80 and $120, though, next year’s duo are thought to each cost an extra $10. That’s likely more reflective of the LEGO Group’s recent price increases than potentially bigger sets, however.

Next year’s LEGO CITY slate is rumoured to include the usual mix of police and fire sets, alongside new Stuntz sets (two of which popped up on LEGO.com back in April) and more intriguing novelties like an Auto Repair Shop and Gaming Tournament Truck. If the past couple of years are anything to go by, expect extensive use of the new road plates.

A total of five new LEGO Classic sets are thought to be coming in 2023, including one new model launching in January. The rest will apparently arrive in March, likely offering assortments of basic elements with satisfying piece counts. (Just look at them.)

Next year marks the 100th anniversary of Disney, and the Collectible Minifigures theme is said to be celebrating with a new batch of blind-bagged characters. It’s the second series apparently on the cards for 2023, following an original set of minifigures in 71037 Series 24.

The LEGO Creator 2023 rumoured line-up has recently grown with the addition of what are likely to be five polybag-sized builds, joining multiple animal-themed sets – including a tantalising magical unicorn. Two of these sets – 31133 White Rabbit and 31138 – are already confirmed to exist, meanwhile, thanks to listings at LEGO.com.

Only one LEGO DC set is currently rumoured for 2023, courtesy of a listing from an online retailer. It’s thought to tie into Warner Bros.’ long-awaited The Flash movie, which is now scheduled to debut in June. StoneWars claims the movie’s mooted LEGO Batmobile will launch a month earlier.

The LEGO Group is reportedly treading familiar ground for its 2023 Disney line-up, which is currently said to span several Disney Princesses and Pixar’s Cars. Going by the product number, we’re expecting the latter to be a DUPLO model. The piece counts below are courtesy of StoneWars.

LEGO DOTS’ rumoured crossover with the Wizarding World doesn’t seem to be resulting in higher prices, as its three Harry Potter products will apparently mirror the rest of the theme’s value for money. (Remember that these sets will mostly include tiny elements, though – so while these piece counts seem generous, they’re not out of the ordinary for DOTS.)

2023 will reportedly bring us LEGO Friends’ biggest set to date in 41732 City Center, which blows past current title holder 41704 Main Street Building by more than 300 pieces. Encouragingly, it’s said to come in at the same price as this year’s smaller set. Product numbers for three of these models originally appeared on LEGO.com earlier this year, but with no further details.

LEGO Harry Potter Hogwarts Moments are out and Hogwarts Banners are in for 2023, according to the latest reports. These four buildable banners will apparently continue the format of their book-based predecessors, opening up into a playset for their included minifigures. Also rumoured for next year are a new Deathly Hallows set and a remake of 2005’s 4762 Rescue from the Merpeople.

We already know which LEGO Ideas sets are currently in production, but the order and timing of their release is less certain. Online listings have given us some insight into which fan-designed sets to expect next, however, with at least four on the list for 2023.

LEGO Indiana Jones is rumoured to be making a comeback in 2023 alongside the fifth film, with sets covering the entire franchise so far. The jury’s still out on whether that will include The Kingdom of the Crystal Skull, though…

There’s no word yet on what exactly to expect from LEGO Jurassic World in 2023, but we know that the theme will continue beyond the confines of the latest movie trilogy. And that could mean celebrating the original Jurassic Park movie’s 30th anniversary…

The LEGO Marvel 2023 portfolio is currently expected to cover at least three new MCU films, alongside a nod to last year’s Morbius, further deep dives back into the Infinity Saga, and three more mechs. The latter of which are now said to be much more expensive, too. Fun!

Seven new LEGO Minecraft sets are reportedly debuting next year, including one first revealed by LEGO.com, and a potential polybag in 30647. The newest addition to this list comes in the form of 21246, however, which is currently slated to be next year’s most expensive set – but its identity is a total mystery at this stage…

At least one more LEGO Monkie Kid set is on the way in 2023, as revealed by LEGO.com in April, ensuring the theme will live on in some form. There’s no word yet on whether it’ll be accompanied by a full wave of Journey to the West-inspired sets, though.

Do you like dragons? How about mechs? Or even motorbikes? If you answered yes to any of those, or perhaps even all of them, good news: NINJAGO is apparently bringing more of the same to the table in 2023. Rumours suggest the EVO line will continue next year, straddling the line between 4+ and 6+ sets.

LEGO Speed Champions looks to be changing in two big ways for 2023: first by debuting four individual cars and only one double-pack (compared to three single cars and two pairs in previous years), and second by releasing one of its first-wave sets in January instead of March.

Next year’s LEGO Star Wars line-up is already shaping up to be pretty interesting – at least if the latest rumours are anything to go by. Alongside two (or three!) new dioramas from Return of the Jedi (which celebrates its 40th anniversary in 2023), we’re apparently getting the first-ever prequel trilogy helmets, and the first TIE Bomber in 20 years.

It’s-a me, LEGO Super Mario rumours! Beyond an anticipated new series of Character Packs, details of next year’s Nintendo sets are pretty thin on the ground right now – but these price points suggest we’re looking at a new wave of Expansion Sets for the interactive theme. Just one of these sets cropped up on LEGO.com in April.

January 2023 looks set to be an expensive month for LEGO Technic fans, as the new year will reportedly kick off with a brand new €450 Liebherr. The action moves from excavation to picking things up with the world’s most powerful crawler crane, which is now said to include 2,882 pieces. Also on the list are a more affordable Bugatti and a new €200 supercar…