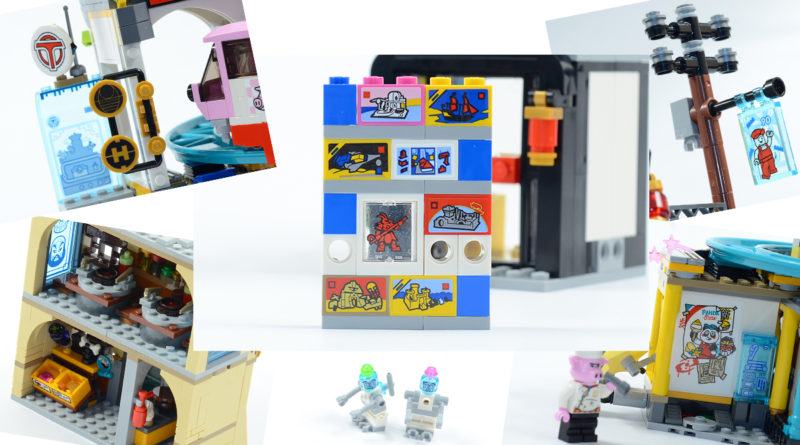 LEGO Monkie Kid 80036 The City of Lanterns is jam-packed with Easter eggs and references to over 90 years of LEGO history – here’s a complete rundown of every single one.

Right at the front of the city we find a classic Octan barrel, though its red spigot has been replaced by a metallic stud. Octan barrels date back to the early ’90s, but ones like this started popping up in 1996 in sets like 6337 Fast Track Finish and memorably featured in 1997’s short-lived Outback offshoot from Town.

The Octan references continue around the back of the karaoke booth, where Octan has diversified into electric energy and set up an electric scooter charging station. Behind that, the poster on the wall features a Panda Store ad, the BIONICLE logo, a flyer featuring a Classic Space minifigure, and the initials N.V. – corresponding to the LEGO designer Nick Vás, who worked on this set.

Over to the information kiosk, and we find the monorail logo from the classic 6399 Airport Shuttle, perhaps the most classic of all monorail sets. Another Octan logo adorns the front of the city on the centre screen.

Before we head up a level, the central hotpot restaurant contains a few references inside. In its ground floor market section, Chang’e’s Mooncakes from 80032 Chang’e Moon Cake Factory, a Spider Queen vial like those in 80022 Spider Queen’s Arachnoid Base, and a teal underwater breather can be found for sale, perhaps where Monkie Kid got it ahead of diving into the deep in the polybag 30562 Monkie Kid’s Underwater Journey.

Upstairs, there are bottles that clearly represent sriracha, with the red bottle and green top – perhaps the first hot sauce in an official LEGO set?

Moving up to the monorail platform level, we find inexplicable logos for Hero Factory and the Bohrok villains from BIONICLE on their own signs. More Monorail logos from 6399 Airport Shuttle can be found on a standalone sign, and adorning the big digital screen – along with what appears to be the initials JBCR, which could reference the set’s other designer Justin Ramsden.

The Pigsy monorail itself also has monorail logos on its control panels.

Above the monorail stop on the other side of the set, we find a big billboard showing Chang’e and her mooncakes from 80032 Chang’e Moon Cake Factory. Above that is a digital sign celebrating the LEGO Group’s 90th anniversary, with a minifigure representation of the classic cartoon character in a red cap and overalls found on the packaging of Town Plan sets in the 1950s. (It would be fun if the LEGO Group actually released this minifigure this year.)

Over by the lobster restaurant we have the logo for the LEGO Group’s weird and much-derided 1998 K’Nex clone ZNAP. It’s nice to see that they can laugh at themselves. There’s also a billboard that nods to Havoc in Heaven, a famous 1960s animated adaptation of Journey to the West. HD and 3D versions of the classic film were released in 2012, so it’s only sensible that a 6D version should release in 2022!

The hotel contains an electronic intercom in the hotel room with a face that looks very much like the two robot figures included in the set, which themselves are a direct callback to the robot in the mid-1990s LEGO Time Cruisers set 6494 Magic Mountain Time Lab.

And that’s all the references we found in 80036 The City of Lanterns. You can read our full review here, and buy your own copy of this impressive Monkie Kid set now from LEGO.com.