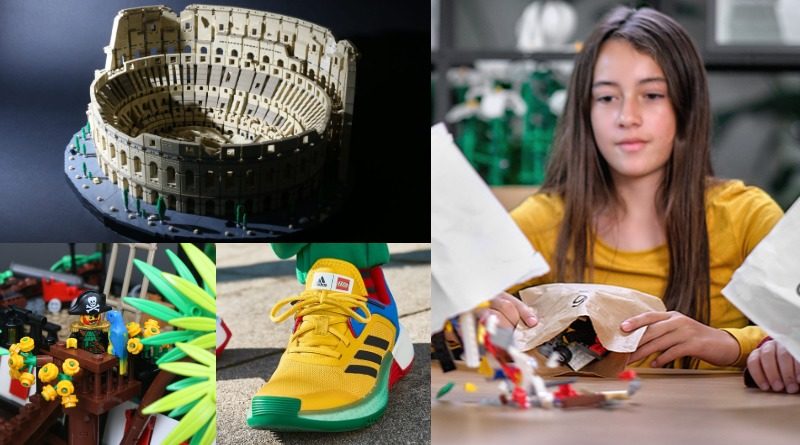 Brick Fanatics rounds up 2020 in LEGO, from record-breaking results and nostalgic new sets to Technic controversy and the power of fan voices.

Whether it was surging headfirst into new markets or developing existing ones, selling out on top sets or delivering surprise collaborations, the LEGO Group just hasn’t let up in 2020. Here’s everything we’ve learned about our favourite plastic bricks – and the company behind them – this year, along with the most memorable news stories, events and LEGO sets we reported, attended and built along the way.

Year of the adult

This was the year the LEGO Group well and truly brought adults into its viewfinder. What began as a rumour in January took early shape in March with the first black-box-packaged sets with the ‘18+’ age recommendation, before the LEGO Group proudly declared ‘adults welcome’ at May’s Fan Media event.

Since then, the likes of 42115 Lamborghini Sián FKP 37 (review), 71374 Nintendo Entertainment System (review) and 10276 Colosseum (review) have taken the realms of possibility with the LEGO brick to a higher level of technique, mastery and amazement, and all for the new, more mature LEGO builder. Bring on 2021.

It’s safe to say that this year has been quite different than usual, with the LEGO Group having to adjust to increased online demand for its products. As countries all around the world were forced into lockdown, many people young and old took to the brick for entertainment while stuck indoors, almost wiping out the company’s inventory in many regions.

The collective culling of social calendars also meant both the LEGO Group and the wider LEGO community had to adjust plans for live events, with everything from product reveals to fan conventions moved to live web broadcasts or mass Zoom calls. Thankfully, it mostly added up to giving us plenty of ways to keep busy. (We’re not out of the woods yet, though, so here’s 10 LEGO sets to build in lockdown.)

It wasn’t just the pandemic that affected the LEGO Group’s operations in 2020. Plenty of wider social issues pulled the company into their orbit, from author J.K. Rowling’s controversial views on the trans community to the Black Lives Matter movement. To the LEGO Group’s credit, it didn’t remain silent on any of those matters, disavowing Rowling, pausing its online advertising campaigns and pledging $4 million to organisations ‘dedicated to supporting black children and educating all children about racial equality’.

Nevertheless, it couldn’t escape its own share of consumer backlash following its last-minute cancellation of LEGO Technic 42113 Bell Boeing V-22 Osprey Helicopter – particularly as some sets had already made it to market.

2020 belonged to Ideas, which twice in the year broke the record for the most projects making it to review – 26 in May, followed by 35 in August. There were the first ever reissues in the line – 92176 NASA Apollo Saturn V and 92177 Ship in a Bottle – which, combined with four new sets, made this the most prolific year for the theme yet.

21323 Grand Piano also took the crown as the largest-ever Ideas set released and, by some margin, the most expensive. Shame it wasn’t as playable as first thought. Next year already looks enticing, with sets due on the successful Medieval Blacksmith, Home Alone and Seinfeld projects – not to mention the confusing fun the BrickLink team-up promises.

Speaking of team-ups, the last 12 months also saw the LEGO Group really branch out into the world of collaboration, releasing a one-off sneaker with Adidas, before ridiculous (but come on, expected) demand was followed by a multi-year partnership and a first range of products.

Not content with sorting out primary-coloured shoes for us, the LEGO Group also partnered with Levi’s in 2020 for a DOTS-inspired clothing line to test the loyalty, bank balance and fashion sense of even the most ardent AFOL – has anyone else bought that yellow beanie yet?

Continuing that dive into new collaborations, this was the year the highly anticipated – and incredibly vague – partnership between the LEGO Group and IKEA took shape with BYGGLEK. What could this Scandinavian powerhouse duo produce with their combined design capabilities?

Some white plastic storage boxes, and a box of LEGO bricks. Surfacing in German IKEA stores in July, BYGGLEK was officially announced the following month for an October release. Just boxes, yes, but clever boxes. Let’s hope there’s more to come from these masters of design next year.

LEGO fans have been more vocal than ever this year, with plenty of polls and fan campaigns to shape the LEGO Group’s 2020 and beyond. The LEGO Ideas platform has provided several of those opportunities, including votes on the next UCS Star Wars model (a Republic Gunship) and the theme for the 150th LEGO BrickHeadz set (unsurprisingly, Star Wars).

Perhaps the most obvious display of fan power wasn’t facilitated by the LEGO Group, though, as an Instagram and YouTube campaign successfully secured the design and launch of 75280 501st Legion Clone Troopers – a set that’s gone on to prove incredibly popular since its August release.

The LEGO Group committed itself to an environmentally-friendly future sooner rather than later in September, pledging an impressive $400 million to fund a range of green initiatives over the next three years.

Following their disappearance from LEGO Stores, plastic bags are also set to vanish from LEGO sets. Paper bags are being trialled as part of a plan to make all LEGO packaging sustainable by 2025. As well as getting its own house in order, the LEGO Group will work with its licensing partners to improve the green credentials of their packaging.

2020 rewarded veteran builders with a plethora of nostalgic nods to LEGO sets of yesteryear. Captain Redbeard rode again in 21322 Pirates of Barracuda Bay, a set bursting with references to the Pirates theme. Another villain returned in 10273 Haunted House, as the spooky home of Baron von Barron is laden with relics from the Adventurers’ exploits.

Train fans were treated to a set commemorating the 40th anniversary of the theme, while the LEGO House threw it way back to the 1930s with an exclusive rendition of the iconic wooden duck. Castle fans were teased by the selection of a Medieval Blacksmith for a future Ideas set (thought to be coming very shortly), and the Collectible Minifigures 71027 Series 20 Tournament Knight, which carries a shield with a very familiar emblem.

China this, China that

If there’s one thing you can safely predict in the LEGO Group’s annual financial reports, it’s double-digit growth in China. The company continued to pour its attentions into its biggest new market in 2020, with more Chinese New Year sets, the global launch of Monkie Kid – a theme based on the Chinese legend of Journey to the West – and more than 80 new LEGO Stores (including a new flagship store in Hangzhou), all designed to establish roots in a country largely unfamiliar with its plastic bricks.

The years ahead will also see the opening of China’s first LEGOLAND park, the arrival of the LEGO Foundation’s Braille Bricks, and dozens more LEGO Stores. If you want a glimpse at the future of the LEGO Group, it’s in China.

2020 may not have been the year any of us expected, but there was no shortage of LEGO news, activities and new sets to get stuck into. While the world ground to a halt around us, LEGO bricks were our constant. And while we hope for a return to normality sometime in 2021, we’re also eagerly anticipating what the year ahead will bring us from the LEGO Group.