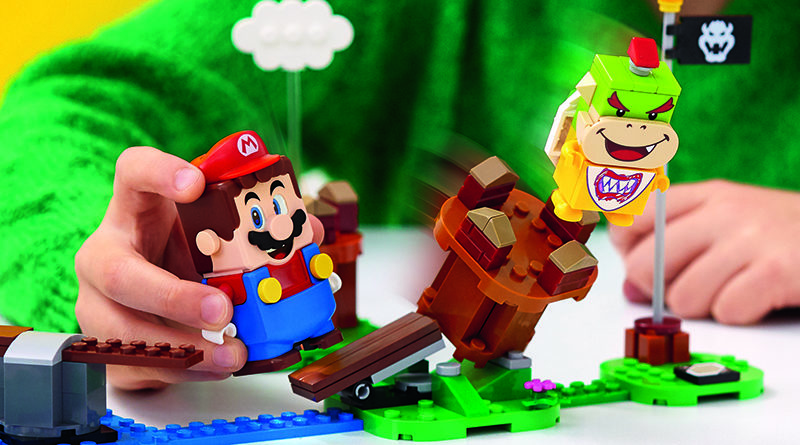 In just a few weeks, fans will be able to build their own video game with LEGO Super Mario. Using the brand new interactive Super Mario figure, the digital world comes to life as players take him across ravines, through castles and to dangerous boss battles.

In the first part of this exclusive interview with Brick Fanatics, LEGO Design Manager Jonathan Bennink and Marketing Director Christian Munk discussed how the collaboration between the LEGO Group and Nintendo happened. Here, they reveal why minifigures were not the way to go and how the Super Mario figure was developed.

You mentioned the different options that you presented to management. Was minifigure scale ever a consideration for this theme?

Jonathan: Yeah of course, it is such an iconic LEGO product or expression but of course the problem is the size of the technology, he had to have batteries, and a display, and a speaker. We tried different combinations of technology and to put it all in a minifigure was just physically impossible, as you can imagine.

After that it was just finding our own size and our own style within the LEGO system. And this is also where it’s been trickling down from the size of technology, which is the two AAA batteries that are in here, they are determining the size of the figure because the figure is just two plates higher than the size of a battery, which our engineers are quite proud of. We really tried to keep him as small as possible.

From there we decided that he needed to be square, it is easier for the technology to fit in a square so you can make a smaller figure, but also LEGO bricks are generally square, the most iconic ones, so we felt it made sense with Mario coming to LEGO form if he is square. Nintendo wanted us to make certain elements more organic like the cap because it is so iconic.

Mario himself looks like he is built out of fused LEGO bricks. For instance, his tummy is the car element, the car hood, and his hair is 1×1 LEGO set plates, so he looks like he is built up from LEGO bricks. Then the enemies followed suit, because the line is all about building and creativity we also felt that the enemies needed to be built rather than moulded out of one piece. Boo is super rounded in the game but he is square because it is a LEGO version.

Some elements needed to be moulded like Bowser Jnr’s shield and this element is new, a 4×2 flat element. There are a lot of new elements in there but we did want to stay true to the LEGO experience that you have to build everything yourself.

How did you settle on this finished design for the figure?

Jonathan: We tried many different iterations of the interactive figure, we also tried with different levels of technology in it, for instance we tried with a brick that was kind of generic and you could build up a Mario around it, so you could also build other characters. We tested it and I think in the end we didn’t want that because kids felt that it didn’t have a soul anymore.

Now we have revealed that Mario can dress up and you can take off his little pants – he doesn’t like it too much – he at least stays Mario, he is not a robot that becomes Mario, so that is why in the end we went for this type of customisation. Customisation is a big part of LEGO play so you can customise the look of him but he never becomes somebody else, that was important to keep the soul of him.