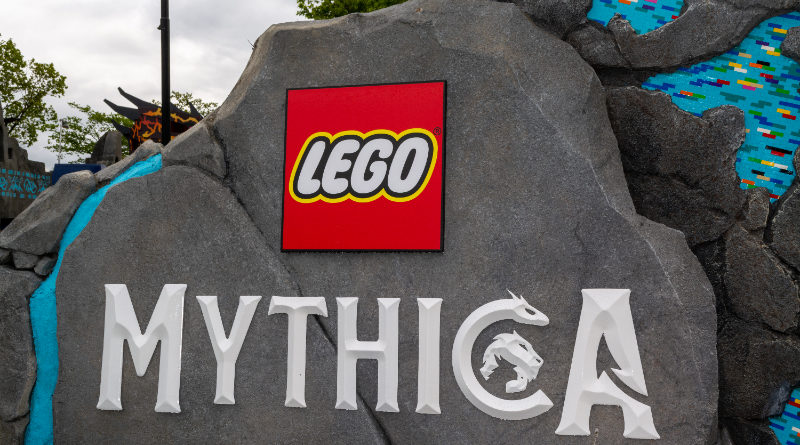 Brick Fanatics takes an early tour of LEGOLAND Windsor’s new LEGO MYTHICA land ahead of its official opening this weekend.

Several years of planning and development, a £20 million investment and one global pandemic later, the UK’s LEGOLAND Windsor Resort is almost ready to unveil its latest attraction to the general public. Brick Fanatics was offered a chance to visit the new world of MYTHICA before it opens on May 29, so we sent Sébastien Daniell down to take a peek beyond the portal and experience the park’s latest attractions.

It’s been a funny old time in the UK lately, with the usual glorious sunshine we expect from May having seemingly gone on holiday, leaving us with mostly drizzle or torrential downpours. That said, come rain or shine, I was eagerly anticipating my trip to LEGOLAND Windsor to see just what had changed since my last visit there in a pre-COVID world.

To reach MYTHICA: World of Mythical Creatures, guests will need to venture through Heartlake City, and head towards the huge stone portal archway – don’t worry, it’s hard to miss.

The first thing that stands out is the prominent use of the medium azure-coloured bricks, which really pop from the surrounding greys. It’s a key colour that is used on much of the décor of MYTHICA, from the hieroglyphic embellishments on the Hungry Troll restaurant, down to the painted cracks on the ground. This brighter, almost glowing, contrast from the ubiquitous LEGO primary colour scheme found in the majority of the park really helps establish MYTHICA as a unique world with hidden magic beneath the surface.

Within moments of stepping through the archway you will quickly become familiar with the theme of MYTHICA. It falls somewhere between the LEGO Group’s Legends of Chima and Elves sets as far as colour scheme and characters go. An impressive brick-built chimera is perched atop a stone plinth with its lion/snake/eagle/shark hybrid body, and around almost every corner you’ll spot another model primed for photo opportunities.

There is something inherently familiar about all the creatures at first – but then you notice the extra appendages, unique colours or mis-matching wings. This may sound like something from Frankenstein’s Lab, but it is more akin to exactly the sort of thing you might imagine a child building out of LEGO.

And that’s exactly the point. LEGO MYTHICA came about as the result of a partnership with family-oriented creative agency Kids Industries, which involved discussions and tests with six- to 11-year-olds and their parents, who influenced ‘everything from the final ride experiences to the names and characters’, according to the land’s press release.

There are several attractions within MYTHICA, but undoubtedly the biggest and most exciting one will be the main draw for visitors. Billed by the marketing blurb as ‘the UK’s first flying theatre ride’, Flight of the Sky Lion is a state-of-the-art ride that takes the concept of 4D cinema to new heights. Literally.

I didn’t know what to expect before taking my place in the queue, and although we got to the ride area quickly, it felt like there was still a lot of waiting around. This could be due to operations and testing of a new attraction, as well as COVID regulations meaning things need to be cleaned regularly too.

Prior to the ride, you’re given a colour and number to remember, which indicates a spot to stand on in a darkened room with TV screens as well as your seat for the ride. A short video plays explaining a bit of backstory to the ride, and preparing kids for what they’re about to experience, aiming to heighten excitement.

You’re then ushered into the final room where there are suspended ‘gondolas’ (that’s what LEGOLAND calls them) with side-by-side seating for several guests. It’s worth pointing out the seats are made of a spongy mesh material and far more comfortable than I’m used to for any theme park ride I’ve experienced before.

As the ride starts, the seats revolve 180 degrees and you’re sitting in front of the most immersive screen I’ve ever seen. It’s similar to an IMAX cinema, except the screen wraps around further to the sides, as well as above and below you. I wasn’t sure if we were really high up or if it was an optical illusion, but that only enhanced the experience once the ride begins.

Guided by Maximus the Sky Lion, you’ll swoop and soar in an incredibly dramatic way and truly feel as if you’re flying. The landscapes explored are all part of the MYTHICA world, which aren’t too dissimilar to the world of Pandora from Avatar at times, and make great use of the varied visuals to accompany your thrill with further effects such as wind, rain and even smells. By the end of the ride, you’ll feel quite exhilarated and possibly a little nauseous. (I certainly don’t seem to deal with motion sickness as well as I used to.)

The only minor issue I felt it suffered from is one all too common in most simulator-type attractions. There is so much going on that it can feel a bit overwhelming at times and it’s hard to digest it all. Perhaps this is by design as you’ll likely want to go on it again and see what you notice on second or third sittings. I was also surprised it wasn’t in 3D, but it doesn’t need to be – the thrill is all in the movement.

MYTHICA also has another new ride in the form of a 13-metre drop tower named Fire and Ice Freefall, though this is less a ‘freefall’ and more a ‘bounce-and-rotate’ ride. Decidedly more appropriate for the younger thrill-seekers likely to visit LEGOLAND than hardcore adrenaline junkies, it did mean even my three-year-old could have a go, though I’m not sure he realised how high it would feel until he was up there.

The third and final ride is a re-modelling of the LEGOLAND classic S.Q.U.I.D. Surfer – a water-based experience where riders are spun around on a jet-boat pod attached by hydraulic arms, controlling the intensity of the thrill via the steering wheel. Now renamed Hydra’s Challenge, the ride itself is unchanged, but the overhaul of colour and the addition of a giant brick-built sea monster called Duo emerging from the water made the whole ride feel fresh and gave it more cohesion within MYTHICA.

For younger children or those not so bothered with intense thrill-seeking there are still plenty of things to entertain. Creature Encounter sees an opportunity for interacting with an adorable MYTHICA-based puppet called Bitsandbobs, whilst Creature Creation lets you get hands-on with LEGO bricks. Once you’ve built a creature of your own, you’re then encouraged to display it along the wall on a giant brick-built recreation of the various MYTHICA environments.

You can see my creature creation addition in the photos below. I know, I know – it’s a pure work of art.

As with most areas in the LEGOLAND park, a themed food establishment is available, here under the name of The Hungry Troll. Although it wasn’t available for food at time of this report, we did get to sample some of the MYTHICA-themed doughnuts that will be available for purchase. Not only do they look rather impressive, but they tasted delightful and come highly recommended should you find yourself needing a snack during your visit in MYTHICA.

There is outdoor seating available and conveniently this is adjacent to the lava dragon-themed adventure playground, which has a pretty impressive-looking slide on it. I’m unfortunately a bit too big and old for those areas now, but your kids are going to love it.

Throughout MYTHICA you’ll notice some obelisks stationed near the huge brick-built models. Look a little closer and you’ll spot round symbols that serve as scannable points for the augmented reality experience. Downloading the LEGOLAND Windor app is required (but it’s actually a very useful app to have handy during your visit), and once you scan the icons with your camera, it allows you to point towards the LEGO models and watch as they come to life through an opening portal.

It’s not something that everyone will be overly fussed by, but it was fun showing my son as the creatures became ‘real’, and it’s just another way in which LEGOLAND is aiming to bridge the gap between physical and virtual in a world that is increasingly dominated by technology.

MYTHICA is a unique area of LEGOLAND Windsor, full of bright and vibrant models and a rather extraordinary ride in the form of Flight of the Sky Lion. It made for a great family outing, and I have no doubt that adults and children alike are going to love exploring this new world of mythical creatures for years to come.

LEGOLAND’s MYTHICA opens to the general public from Saturday, May 29.