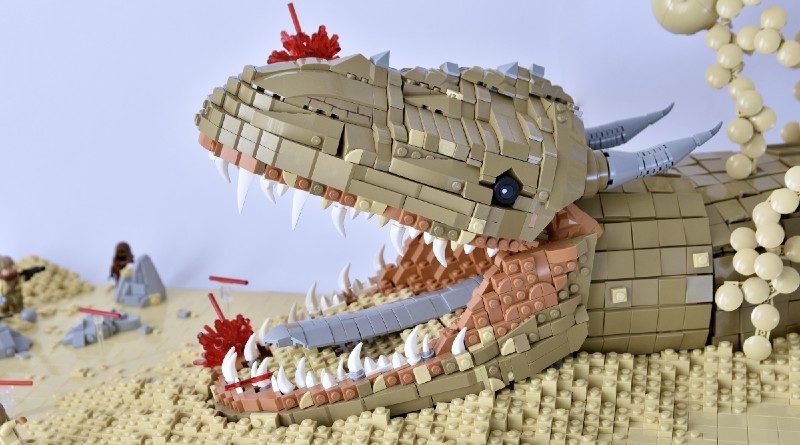 A new LEGO Star Wars The Mandalorian build is depicting the fearsome Krayt Dragon from the second season of the show, with some brick-built visual effects.

First Order LEGO has challenged themselves with recreating one of the most action-packed sequences in the second season of the popular Star Wars series. If you haven’t already watched The Mandalorian Season 2, you might want to do so before reading any further.

While Din Djarin was visiting the planet of Krayt in search of help in finding the Jedi, he stumbled upon a village with a figure wearing a set of Mandalorian armour that didn’t belong to him. Eventually, this culminated in a fearsome battle between Din Djarin, Tusken Raiders, the villagers and a Krayt Dragon, a predator of the Sarlacc.

Even if you haven’t watched the episode, trust that it was a difficult battle between the two sides and the builder has managed to capture the desperation of the fight in this model, with one side dominated by just the head of the colossal beast and the other with the opposing forces attempting to lure it into a trap.

One of the more visually appealing elements of the build is that certain special effects have been replicated with bricks, such as the sand being blown away by the creature’s movement and the laser blasts colliding with its hide. The use of LEGO crystal bricks is particularly clever, providing some colour to the large diorama.

There are plenty of other details too, such as the sand pouring out of the black base, so be sure to watch the video to learn more. And if you want to try and recreate the episode for yourself then 75299 Trouble on Tatooine isn’t a bad place to start, with the updated Din Djarin minifigure and a Tusken Raider both included.