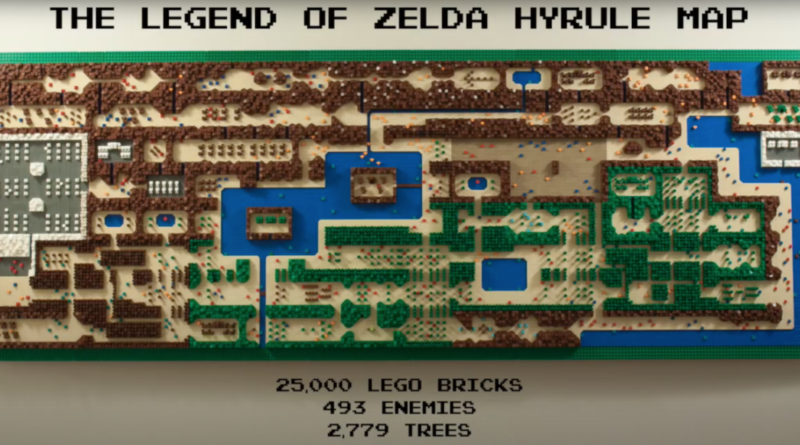 A talented fan has managed to recreate the map from the NES game The Legend of Zelda using a staggering 25,000 LEGO bricks.

Released in 1986 on the Nintendo Entertainment System (or NES), The Legend of Zelda was a ground-breaking video game that went on to sell a staggering 6.5 million copies. Designed by Shigeru Miyamoto and Takashi Tezuka, the game featured an elf-like hero named Link and his adventures in the fantasy land of Hyrule.

The Legend of Zelda has inspired many video game artists and developers and is considered by many to be the forerunner of modern action RPGs. One huge fan of the game is Ian Roosma, who has such fond memories of The Legend of Zelda that he decided to recreate its world map using 25,000 LEGO bricks.

“I was looking for something that had personal meaning to me,” said Roosma in an interview with Kotaku. “Zelda on the NES is particularly nostalgic because it was the beginning of open-world games for me. The developer just drops the player off somewhere and you decide where you want to go and what you want to do, it’s the best type of game.”

It took Roosma four months to design and build the epic world map model, which is 30 inches tall and 86 inches wide. As the build was made in 3D, he was able to create a better sense of scale than the original map, with rivers lower than the surrounding land and trees at various heights. A LEGO Ideas Legend of Zelda Hyrule Castle 30th Anniversary project is currently in review, having managed to reach 10k supporters.

Fans of maps will definitely want to pick up the next LEGO Ideas set, 21332 The Globe, when it launches tomorrow and 71374 Nintendo Entertainment System is still available from LEGO.com.