Thanks to Electronic-Shop, an online retailer based in Luxembourg, we have our first glimpse of one of this summer’s Solo: A Star Wars Story LEGO sets, 75215 Cloud-Rider Swoop Bikes. 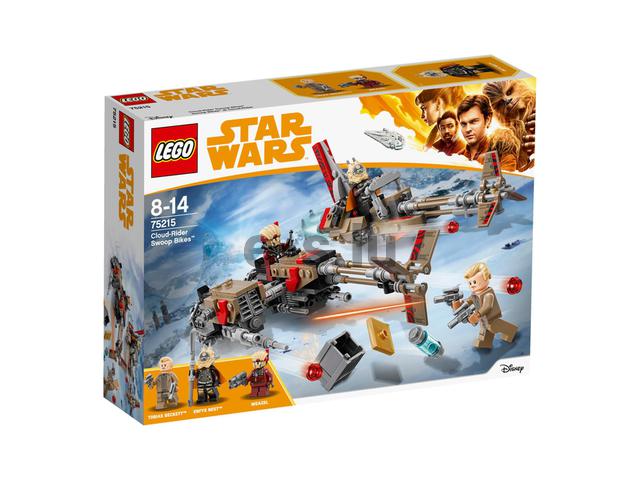 Based on an early scene from the Han Solo film involving a train heist, the 355-piece set includes two swoop bikes and minifigures of Enfys nest, Weazel and Tobias Beckett.

There’s no official word on price, but it’s thought to be around the $/£30 mark – Electronic-Shop lists it at €31.90 – and will likely launch alongside the rest of the summer Star Wars wave on August 1, 2018.

The official set description, also listed on Electronic-Shop, suggests the set will combine with the other two upcoming – but not yet revealed – Solo: A Star Wars Story releases, 75217 Imperial Conveyex Transport and 75219 Imperial AT-Hauler.

Take off with the “Cloud-Rider Swoop Bikes” to chase the coaxium off Tobias Becket. The set includes 2 speeder with shooters and 3 minifigures, a canister with coaxium and various equipment.

Help Tobias Beckett protect the precious Coaxium from Enfy’s Nest and Weazel, who are getting smitten with their super-fast “Cloud-Rider Swoop Bikes” from the LEGO® Star Wars Set 75215! Each speeder has big engines for super fast rides and powerful shooters. Will Tobias be able to escape before the two greedy crooks steal the coaxium? You can decide that for yourself with this exciting LEGO Star Wars set!
Includes 3 minifigures: Tobias Beckett, Enfy’s Nest and Weazel.
Includes 2 sleek swoop bike speeder, each with a hinged minifigure cockpit and shooter. At one of the Speeder even a sidecar is attached to stow the canister with the Coaxium can.
Also included are Tobias Beckett’s Blaster pistols, Enfy’s Nest equipment and Weazel’s Blaster.
Imagine the exciting adventure scenes from “Solo: A Star Wars Story”.
Combines with the Imperial Conveyex Transport (75217) and Imperial AT-Hauler (75219) kits for the ultimate raid on a high-speed train!
Swoop bike with sidecar is 5 cm high, 21 cm long and 9 cm wide.
Swoop bike without sidecar is 9 cm high, 19 cm long and 5 cm wide.